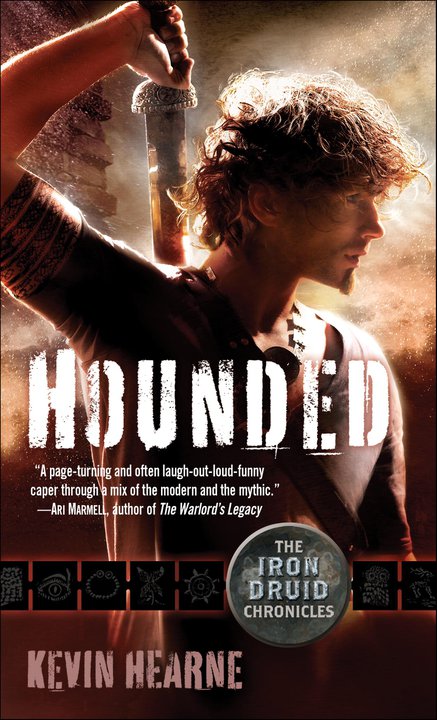 Atticus O’Sullivan, last of the Druids, lives peacefully in Arizona, running an occult bookshop and shape-shifting in his spare time to hunt with his Irish wolfhound. His neighbors and customers think that this handsome, tattooed Irish dude is about twenty-one years old—when in actuality, he’s twenty-one centuries old. Not to mention: He draws his power from the earth, possesses a sharp wit, and wields an even sharper magical sword known as Fragarach, the Answerer.

Unfortunately, a very angry Celtic god wants that sword, and he’s hounded Atticus for centuries. Now the determined deity has tracked him down, and Atticus will need all his power—plus the help of a seductive goddess of death, his vampire and werewolf team of attorneys, a sexy bartender possessed by a Hindu witch, and some good old-fashioned luck of the Irish—to kick some Celtic arse and deliver himself from evil.
Urban Fantasy books are usually one breed or another but they all seem to subscribe the same basic premise. They usually concern someone fighting, loving, interacting with or being vampires/werewolves/faeries/ghosts/angels ect. So what is needed to set them apart from one another and help you decide which ones are worth your time? Well, they either have to be REALLY good at what they do and the story they tell you, or they have to introduce a new/rarely used faction into the Urban Fantasy arena...and ALSO be REALLY good at what they do and the story they tell you.
Thus, enter Kevin Hearne and his Iron Druid Chronicles. The first book is HOUNDED, and what an absolute blast to read!
Reasons this series is super cool and fresh (in a point form list…you know...just for fun)
-Atticus O’Sullivan is a 2,100 year old Druid who lives in Arizona, runs an occult bookshop/apothecary.
-Atticus has to fight some supernatural beasties, whilst being friends with others.
-Atticus has pissed off a few major Celtic gods including the main antagonist Aengus Og (God of Love..of all things and he's kind of a dick....pun I guess fully intended).
-Atticus sleeps with goddesses.
-Atticus stole a fabled sword many years ago on a battlefield that is coveted by a certain pissed off Celtic deity (See point form #3).
-Atticus has an Irish wolfhound named Oberon, with whom he can telepathically converse.
-Atticus has earth magic and as long as he can touch the actual earth with a part of his body he can summon power.
-Atticus is a completely sarcastic and hilarious narrator.
-Atticus and Thor (yes, THAT Thor) don’t apparently get along.
So basically you have the makings of not only a compelling protagonist with a number of different aspects to him, but he is also fun to read about. Hearne has made Atticus have an interesting set of scruples. He will kill any otherworldy things that come at him without compunction, but when it comes to real humans he hesitates. Even when said humans are clearly being used by otherworldly things he has cause to do so. So already there is a decided gray area in our hero’s mind and it seems like years of dealing with the fae, and gods ect. he has become rather cynical about them and what they can do (especially to him). Basically he takes a shoot first and ask questions later attitude that would come from living that long around said folk.
Atticus is surrounded by a slew of other interesting characters, including an ancient Viking Vampire lawyer, who works for a firm run by Werewolves, a coven of witches one of which appears as a college student with fluorescent half tops, shorts and sneakers, and even the goddesses of death and the hunt show up. Hearne knows Arizona well, and I found myself googling certain places (like the Papago Park Hills) to see where things are. Like Harry Dresden’s Chicago, Atticus’s Arizona is a well researched place that all helps to picture the setting as you read.
The prose is easy and flows with a significant speed and grace, and I found myself devouring page after page at a decent lope. Hearne suffers from zero pacing problems, as the book is fairly rocketship-shaped and zips along zigzagging from event to event with ease.
The main storyline follows Atticus’ need to keep his stolen sword safe from Aengus Og who tries increasingly clever avenues in which to try to snare it out of our hero’s hands, and all the while Atticus has to try to prevent his own horrible death at the hands of more than one shady character who’s true intentions are unclear. Atticus and Oberon’s banter throughout the book is on par with any great duo of humour and the fact that Oberon likes to glom onto things he’s heard stories about he spends a lot of time (in this book) wishing he was Ghengis Khan. I laughed so much at their back and forth, not to mention Atticus’ own internal and external monologues, most of which are a pop culture nerd’s paradise.
A really fun first entry in what I hope is a long series. It’s not perfect, but it is breathlessly paced and well plotted. It had a few issues with events and twists that I saw coming, but those are fairly minor complaints. An entertaining read from cover to cover, HOUNDED is well worth your time and if you think the genre sags a bit under the weight of a lot of the same sorts of generic plotlines out there, why not try something quite different for a change. I think you’ll find it refreshing!
Note: I plan to pick up the second soon (HEXED) and may just grab the third (HAMMERED) while I am at it. Hearne is currently at work on the 4th book in the series.
Posted by GunMetalBlue at 9:41 AM