Book Review: DIVING INTO THE WRECK by Kristine Kathryn Rusch 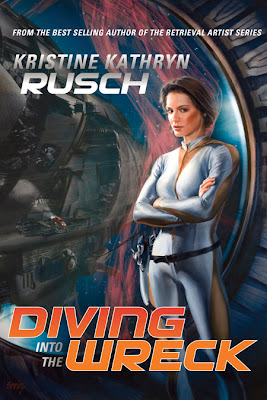 Whenever she discovers an abandoned space ship she prefers to explore the wreck herself, before passing it along to the authorities. Sometimes she turns the ships into a tourist spot, sometimes she salvages the wrecks for a little money and sometimes she keeps the wrecks off the books and all to herself. Fascinated in the lost history of these ancient vehicles the emotionally fragile and withdrawn Boss, along with a carefully picked crew, will spend weeks exploring every hull and bulkhead, teasing out the wreck’s hidden story.

One day Boss stumbles across a wreck that has no business being this far out in deep space, an ancient Earth ship known as a Dignity Vessel. These antiquated warships are so old that much of what has been written about them seems to be more myth and legend than actual fact. However, the stories all agree on one thing, Dignity Vessels are incredibly dangerous.

Fascinated by the find Boss puts together a small crew of divers to explore the wreck. Quickly the crew discovers why Dignity Vessels are so treacherous. The ships utilize stealth technology, knowledge so hazardous that its origins have been lost in time. Despite its continued efforts humanity has never been able to replicate stealth tech, though periodically it attempts to rediscover its origins.

Fuelled by a deadly combination of greed and wonderment Boss ignores her own misgivings and continues to explore the wreck. Even the discovery that Squishy, a member of her own crew, was part of a secret government program to resurrect stealth tech isn’t enough to dissuade Boss from satisfying her own curiosity.

But as Boss gets closer to unravelling the mystery behind stealth, tragedy strikes. After the death of two divers Squishy abandons the crew to alert the authorities about the existence of the Dignity Vessel. Forced by the goverment to give up the wreck and consumed by feelings of guilt Boss breaks up the crew.

Abandoned and forgotten, Boss must discover the secret behind stealth technology, even if it means exposing the tragedies of her own past.

DIVING INTO THE WRECK is an excellent book that manages to use sci-fi motifs as the backdrop to a great story without falling prey to the hoary pitfalls of the genre.

Mirroring the solitary and lonely pursuit of wreck diving itself, author Kristine Kathryn Rusch has created a very contained and insular book here as the entirety of the story is relayed through Boss’ internal monologuing,

This means the narration comes across as detached and reserved at times, presumably taking its cue from Boss’ own mental state.

There are some advantages to this approach, it gives the story an unreliable narrator which is a technique, when done well, that I particularly enjoy. All the character and scenery descriptions are filtered through Boss’ own experience and personal history (or her personal baggage, whichever description gives you more mileage) colouring her perceptions of people and events.

While this inward focused storytelling approach might slow down the pace of the narrative just a scooch, it entirely suits the mood and tone of the piece. Although the stakes of the story potentially have interstellar repercussions Rusch is more concerned with fleshing out the personal concerns and internal dilemmas of Boss instead.

WRECK is apparently cobbled together from three of Rusch’s earlier novellas and unfortunately it shows. Despite a clear narrative through line in the novel there are distinct stopping points where it’s clear a particular novella has come to an end. This ‘all stop’ felt a little jarring, more akin to the intermission between acts in a play, than the end of a chapter in an ongoing story. I would have liked to have seen more of an effort gone into blending these separate tales into a single cohesive narrative.

WRECK is a solidly laid out and plotted novel. Rusch has a good ear for dialogue and creates distinct characters without reverting to cliché stereotypes in order to set them apart from each other. She has fashioned a dark and inhospitable universe but somehow manages to inject it with hope and humanity at the same time.
Posted by Chris at 9:17 AM