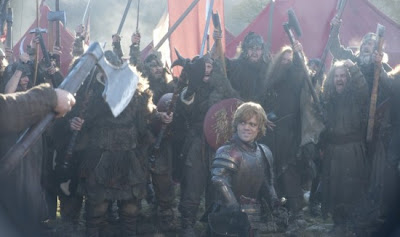 So here we are, the penultimate episode of GAME OF THRONES.

There's just one episode left in this massive fantasy series the onscreen action and excitement is slowly being ratcheted to a fever pitch.

With casting for a second season already underway it’s comforting to know that my emotional investment of the past year won’t be for naught.

But first we should get our recappitude on so everybody is on the same page.

As always, spoilers abound, so if you don’t wanna know…DON’T READ!

Ned continues to waste away in a jail cell, visited only by Varys who tries to convince the stubborn lord to recant his statement about the validity of Joffrey's claim to the throne, if not to protect his own neck but to save the lives of his daughters.

Ned’s son Robb continues to lead Stark forces south towards King’s Landing in order to secure his father’s freedom. Hemmed in by a pair of Lannister armies and the Trident river, Catelyn Stark negotiates passage across the river with the crotchety Lord Frey by promising Robb’s hand in marriage to one of Frey’s many daughters.

At the army of Tywin Lannister, Tyrion passes a sleepless night playing drinking games and recounting the story of his brief marriage to his new paramour as well as his bodyguard, Bronn. Placed in the army’s vanguard Tyrion doesn’t think much of his chances for surviving the upcoming battle with Robb’s forces.

The next day, with Robb’s army seemingly on their doorstep, Tyrion rallies the hill people of the Vale to battle but is himself knocked unconscious by a wayward club before the two forces can meet. When he awakes Bronn informs him that the battle only involved a small portion of Robb’s army and that the bulk of his forces are still uncounted for.

Later it is revealed that Robb chose to fight Jamie Lannister’s forces instead, winning the encounter and capturing the former Kingsguard in the process.

Across the ocean Khal Drogo is revealed to be in near death, his sword wound from the last episode festering and weakening him. Unable to lead his people his wife Daenerys attempts to rule in his name. However the horse people are reluctant to take order from a woman, even their Khaleesi, and it is clear that as Drogo’s health fades his subjects are becoming increasingly rebellious.

Desperate to save her husband Daenerys implores the witch, Mirri Maz Duur, to save the Khal’s life using whatever means necessary. Mirri agrees, telling Daenerys that she can save her husband using blood magic but also warning that the cure might be worse than death itself. In a gruesome display, Mirri sacrifices the Khal’s horse and orders everyone out of his sickroom.

Finally, at King’s Landing, Ned agrees to recant his statement. Paraded in front of an angry crowd he confesses to treason and begs for mercy. Despite the counsel of his mother and others to strip Ned of his titles and send him to the Wall, Joffrey denies the Lord of Winterfell mercy and demands his head instead.

This show only gets better the further into its run we get. If we’re splitting hairs here I would have liked to have seen some of the Stark\Lannister fight scenes actually make it to the screen. With a show that purports to dream as large as this one does limiting the battle sequences to epilogue status only ultimately doesn’t feel very satisfying.

I suspect that budget got in the way (doesn’t it always). But considering how much the second book\season deals with the ongoing War of the Five Kings I’m hoping they’ll free up enough dollars to allow a little more action to hit the screen next time.

As the series progresses the clear standout performer for me is Peter Dinklage. Seriously, this guy is getting all the best bits to work with. While most of the cast is reduced to grim and frowny, Dinklage has seemingly portrayed the entire range of human emotion. His presence defines every scene and practically demands the audience’s attention at all times.

It's no secret that my interest in this show has waxed and waned over the course of the season. While clearly a high quality production I think I was a little let down by the fact that being overly familiar with the books meant that there were no real surprises for me to react too. However as the show continued to find its own voice I found myself more consistently being drawn in to the story and its inhabitants. In the end I think I was successfully able to put my reluctance aside and appreciate GAME OF THRONES on its own merits.

Now with THRONES and a disappointingly mediocre season of DOCTOR WHO wrapped for the year my biggest problem will be figuring out what to watch next. Any suggestions?
Posted by Chris at 8:54 AM