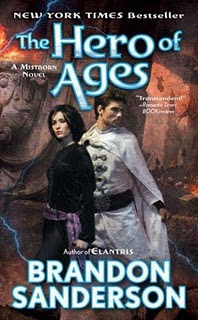 HERO OF AGES was also previously reviewed by the Scottness, those of you who are interested in balanced reviewage can read that review here.

(Those of you who are interested can get your click-on here and here to read my opinion on the first two entries.)

By using the Well of Ascension and relinquishing the power it contained Vin has released the dark god Ruin into the world.

A chaotic force, Ruin’s sole desire is to destroy the entire world and all those who live upon it. His freedom causing chaos and anarchy to ripple across the land.

Crops are failing, buried under a blanket of ash, kings and heads of state are infected by madness and Steel Inquisitors stalk the earth, leaving only death and destruction in their wake.

Meanwhile, the remnants of Kelsier’s thieving crew (for whom it takes a Herculean amount of effort for me not to refer to them as ‘rag-tag’) and newly minted emperor, Elend Venture, are racing across the Dominances shoring up defences and searching for the former Lord Ruler’s hidden caches.

Each cache contains clues about various Allomantic metals and provides supplies to be used by the populace in case of an emergency.

In the struggle to unite the disparate parts of the Empire under a single banner the crew find themselves flung across the Dominances, each trying to beat back Ruin’s influence in their own little corner of the world.

Damaged in body and soul Spook, the former thief, prowls the streets of the canal city of Urteau in search of a hidden cache and keeping a watchful eye on the dangerously unbalanced leader known as the Citizen. When Spook is caught trying to assassinate the Citizen he finds himself visited by the ghost of Kelsier and mysteriously able to burn pewter.

Sazed, the eunuch Terrisman, disheartened after the death of his lover Tindwyl (just roll with it), scours the teachings of ancient religions in the hopes that one of them will provide the answers that he needs to bring closure to his grief. But as he continues to eliminate religions he falls deeper into a dark depression.

In the secret homeland of the kandra, TenSoon tries to convince his brethren to take up the fight against Ruin. Imprisoned and abandoned his task seems hopeless, especially since the Second Generation seems so determined to maintain their isolationist stance by silencing him forever.

Elend may have taken the role of emperor reluctantly, but that’s not going to stop him from doing everything he can do protect his subjects. With an army of koloss at his command he throws himself into his duty, risking life, limb and the woman he loves in order to unravel the mysteries left behind by the Lord Ruler and defeat Ruin.

Vin is trapped in the city of Fadrex by the upstart King Yomen. Her supply of metals are exhausted, Ruin whispers constantly in her ear, a constant reminder of her own failures, and time is rapidly running out as the very planet seems to be dying around her. Out of time and out of options Vin must make a choice between giving up or fighting with her last breath.

Unfortunately I don’t have much to add for the actual review portion of this summary sandwich.

If you liked the previous entry in the Mistborn trilogy, WELL OF ASCENSION, then you probably won’t find much here to put you off. By building on the sturdy foundation of his previous two novels Sanderson is able to cut right to the chase and do away with any unnecessary setup. This book has a faster, more action oriented pace here and considering Sanderson’s tendency to overwrite a bit the two forces counteract each other to set up a well paced story.

And there’s some good payoff here, the biggest of which has to do with the heretofore unknown secret origins of the kandra. But there are other little treats layered in throughout the book about the true motives of the Lord Ruler, the balance between Preservation and Ruin and mysterious history of the planet.

I just wish that Sanderson had been able to maintain this pacing throughout the previous novels.

I’ve touched on the emo-elements of the two main characters, Vin and Elend, in my previous reviews. But in this novel, Sanderson tweaks the relationship slightly, creating lovers tortured by circumstances beyond their control rather than TWILIGHT style romances based on teenage angst and hormones. It’s a subtle change but one I whole heartedly embrace. I’m fine with conflicted protagonists, hell, I embrace them, I just don’t need them to remind me of that fact every time wander off alone.

And again, I give the Sanderson props for not putting his characters up on pedestals, protected and untouchable. It makes for much more interesting reading to know that any character, big or small, could suddenly find themselves shuffling off their mortal coil when faced with a stabby situation. No one is safe.

Quibbles? I have a few. I still think Sanderson spends too much time laying out the ground rules of HOW THINGS WORK (big booming god-like voice optional) and he often gets bogged down in describing what characters are thinking and feeling and ruminating about. He also has an unfortunate tendency to slow the story down a bit by unnecessarily describing everything around his characters.

(Yes. I know. They are living in a world beset my mist and falling ash. But if the aforementioned mist and ash are so bloody important at least bust out a thesaurus and use new words to describe them, like fog or cinders or something. Once you’ve described one ash choked landscape you’ve pretty much described them all.)

On the whole I enjoyed the series, was interested in the series; but I wasn’t particularly engaged in the series. While I can point to individual elements of the books and say, these things didn’t really work for me, in truth none of them were so egregious as to prevent me from enjoying the story or recommending it to others. There were things present here that I was genuinely interested in, it was just the execution and presentation that tripped me up.

I guess there was just something about this trilogy that just didn’t resonate with me. In the end I think I was reading it out of habit and not out of a burning desire to know what comes next.
Posted by Chris at 12:08 PM