An Evening in Toronto with China Miéville 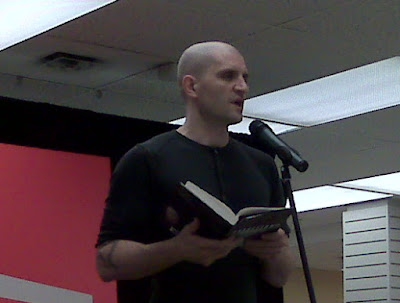 Last night was the first time since starting the blog that I have met an author. In fact, this was the first time I have ever met an author of the types of books I read.
I’m totally new to the China Miéville book scene. About two years ago I attempted to read PERDIDO STREET STATION, and while I found it wondrous and strange, I will admit to being scared off by its complexity so I stopped reading it and put it back in the To-Read pile where it has sat since then. The sometime last year people started gushing about his latest book (at the time) and that was the urban fantasy titled KRAKEN. I decided it sounded too interesting to pass up. I’ve not only now read KRAKEN once, but I am currently on a re-read so that I can review it here. KRAKEN brought me into Miéville’s world with a kind of disarming ease, and I found that after I read it, my desire to read all the things he’d written jumped significantly. PERDIDO STREET STATION is now closer to the top of my To-Read pile. I think after reading KRAKEN I now get how to read Miéville without finding it complex. I don’t think my headspace was right the first time, and now it is.
As a fellow blogger pointed out in her review of his latest book, EMBASSYTOWN, Miéville almost REQUIRES you to sit with a dictionary at the ready and learn while you read and that is, for lack of a better word, delicious for a bibliophile.
So last night China Miéville made his FIRST EVER Canadian book tour appearance at Toronto’s The World’s Biggest Bookstore. So I hustled it down there after work and got a front row seat.

He read from EMBASSYTOWN for six or eight minutes, and to hear him read his own work was rather a nice thing to sit and listen to. An author knows every inflection for every passage they wrote. It was super cool to hear the man himself read his stuff. After that there was a Q & A session…in which everybody’s questions were WAY smarter than anything I could come up with…so I just sat and enjoyed. Some of the questions I’d heard before and some I hadn’t. Miéville himself was gracious, really funny, and above all else sharp as a tack and super smart.
One person asked Miéville if he thought THE CITY & THE CITY would make a good BBC miniseries, and he jokingly answered by saying that he thinks ALL of his work would translate exquisitely well to other mediums, and then laughed. He went on to say that of all his work THE CITY & THE CITY would translate the best, but that he was curious as to the pop culture paradigm or belief that “If your book is very good, it will grow up one day to be a film.” He said he’d be flattered if they did one of his books as a film or TV series, but that he seemed leery of the idea as well since no one wants to see their work messed up.
He noted, when asked how he writes, that there really is no clear system to writing or being a writer, and seemed to say that it would be subjective from person to person how they write and craft stories. He mentioned that he sometimes writes 4000-6000 words in one day and then might not write for the rest of the week.
One of my favourite things he said was in answer to a question of whether or not he would return to the Bas-Lag world in a future book or books. He said that it’s likely possible down the road but that we as geekery culture in general like to take things we love and destroy them by overdoing them. He said it’s BECAUSE he loves zombies, that he is currently SICK of zombies. That makes perfect sense to me. We ruin things we love by not leaving them alone (*cough* George Lucas *cough*), and we should be more wary of this sort of thing. He finished though by saying if he were a betting man he’d lay ten pounds down on him writing another novel set in the Bas-Lag universe. He just doesn’t want it to become a “default setting.”
I think the most interesting thing, for our readers and most especially Miéville fans is one of the last questions he answered when asked about once saying he wanted to write a book in every genre (as he was interested in all genre’s). He said he sometimes says things in interviews, thinks they are cool ideas and then forgets about saying them. He went on to say that the Internet does NOT forget, and then when it gets regurgitated back to him by a fan down the road that has read it, he once again thinks, man…what a cool idea! So he said he is his own sounding board in a way sometimes. That was followed by the fact that he was currently most interested in writing…a regency romance novel. This actually got a few chuckles, as people didn’t seem to think he was serious. He was indeed serious, however, as he went on about it and that it was what he most recently thought of doing genre-wise. I liked this idea because can you imagine something as classic and genius as Jane Eyre, but filtered through the mind and words of China Miéville? That would be pure win in my books. 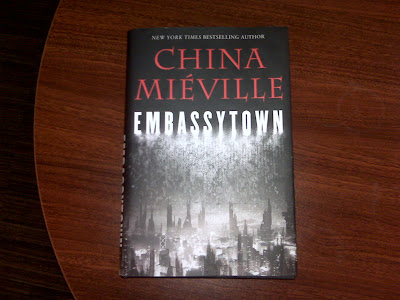 Finally after the Q & A, Miéville sat down to sign books. I was second in line due to my position in front. I wish I’d had the forethought to buy a hardcover copy of KRAKEN (my copy is on my Kindle), but I digress. I took my copy of EMBASSYTOWN up and he signed it (see picture below)…with a Rudyard Kipling quote even! If you can’t read it in the picture it says
“Words are, of course, the most powerful drug.” ~ Kipling.
I said to him that I was relatively new to his books, and that I’d only read KRAKEN so far, but thanked him for making my trips to and from work that much more kickass. He smiled and said that was very kind and he hopes I enjoy the new book as much. A simple encounter, but of course I left with a huge grin on my face. It’s interesting, for a bibliophile like myself, to finally get to meet an author who I admire so much. It was an experience I likely won’t forget anytime soon. A great evening all told. 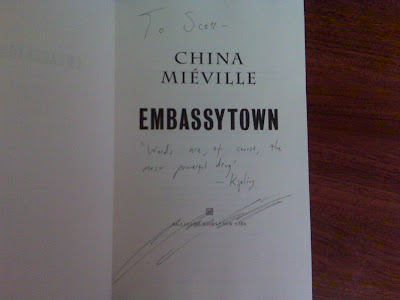 I’ll review EMBASSYTOWN once I have read it (though I hear amazing things already), but first up expect my review on my re-read of KRAKEN soon.
Also, you can't really tell in the picture, but he has the most amazingly detailed kraken/squid/tentacle tattoo on his upper right arm, the tentacles twine and wrap down around his inner elbow.
Posted by GunMetalBlue at 9:23 AM