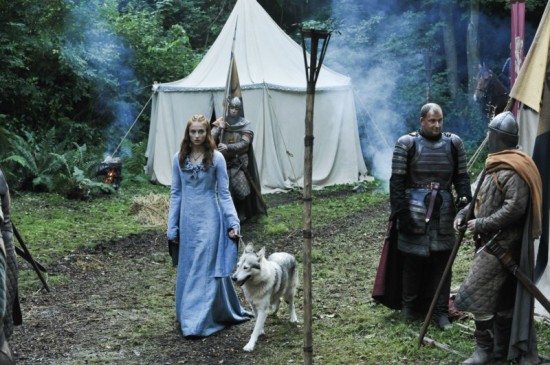 Chris and I will be alternating reviews for the episodes, so will get both our overall viewpoints hopefully. Since he did episode 1, I’ll be handling this one.
Titled THE KINGSROAD, episode 2 of HBO’s GAME OF THRONES ramps up the story while apparently maintaining its viewership numbers (and being basically awesome for HBO). So much so that after the first episode aired it was greenlit for a second season. Excellent!
Following directly on the heels of the first episode, Bran Stark survived his fall, but is in a coma watched over by his distraught mother Catelyn. Tyrion Lannister has decided to join Jon Snow and Benjen Stark in their trip north to the Wall (to see such a majesty of an edifice and to "piss off the edge of the world"). Meanwhile Ned takes Sansa and Arya with him south on the road to Kings Landing (to become the new Hand of the King) joining the King, Queen and their entourage, leaving Robb (eldest son) in charge of Winterfell in his absence.
The episode gets off to a great start and we get some of the key conversations form the book. Jon Snow’s conversations with both Jaime Lannister and then Tyrion Lannister are equally telling and completely different in tone. Jaime is mocking, and Tyrion is imparting actual wisdom. The trip to the Wall mostly takes a back seat to the trip south on the Kingsroad as viewers will run into their first real view of what Prince Joffrey Baratheon is really like, and Sansa’s blinded admiration of him simply because he is a prince. The scene with Arya and the butcher boy playing at swords with sticks is so perfect and for me (as a big fan of the books) Maise Williams who plays Arya is spot on in everything she does throughout her tussle with Joff and up to Nymeria being sent off is bang on. The surprise here is when there is no Nymeria to punish and Lady is put up for death instead, Sophie Turner (who plays Sansa Stark) shows why she was hired to play the role. When she screams and cries that Lady is gentle and did nothing I really felt it, and even later when Jory Cassel embraces her you feel it. That scene is so good that when Ned has to do his part there is this extra layer of emotion added to an already sad scene. I was wholly impressed by both Sophie Turner and Maise Williams in this ep. Jack Gleeson hasn’t yet blown me away as nasty prince Joffrey, he makes all the faces and whatnot but he has yet to show me that he can pull off the complete and total stain that is Joffrey. I’ll give him time and hope he fills the role properly. Daenerys' plotline picks back up as Khal Drogo’s horse clan makes its way to their home Vaes Dothrak and is all about sex this episode. In fact it brings to attention and gives a reason for all the doggie-style sex in the first episode (other than Jaime and Cersei obviously, but that’s another beast…one with two backs :P ), and VIA Doreah, one of Daenerys Westeros-raised handmaidens she finds a way to make the best of her situation and have Drogo see her as something more than just a wife and a lay. I’m glad they’ve addressed that early on as their story is about so much more and I want them to get to that, so it’s nice to see things developing in that direction on episode 2.
The standout though? Even though Sansa and Arya were amazing…

My god, the assassination scene with her protecting Bran was the best thing in both episodes so far aired. It was visceral, brutal and showcases that Catelyn is not someone to be messed with. I mean she grabs the blade of the dagger with her hands and as it must obviously be scraping against muscle and bone she still pushes it away. Sorry, but she officially gets the badassery award for that scene alone. Then of course the ending makes for even more awesome and things to come. I was worried about Michelle Fairley at first, but after this episode I am completely confident she can do Catelyn total justice.
My other favourite moment? Tyrion telling off Joffrey for being so flippant about Bran's "accident", and so he puts the prince in his place and slaps him not once, not twice but THRICE! Man that was made of win. So great. Peter Dinklage has absolutely OWNED the role of Tyrion from minute one. He is perfect in every way. I think he actually chews scenery as well as Sean Bean does in fact. I am mesmerized every time he is on screen. Some of that is likely how much I like Tyrion as a character, but I just think Dinklage took this character and made him twenty times more brilliant.
A really solid second episode in a series that I so far have very few complaints with. I honestly think that so far my only real issues would be with the Daenerys actress Emilia Clarke not being as close to the character from the book as I want, but I can see shades of her, so hopefully that will grow as the episodes air. That’s a nitpick though. To me, so far everything else has been great.
Bring on the next episode LORD SNOW!
Posted by GunMetalBlue at 7:25 AM