Music Review: AMANDA PALMER GOES DOWN UNDER by Amanda Palmer 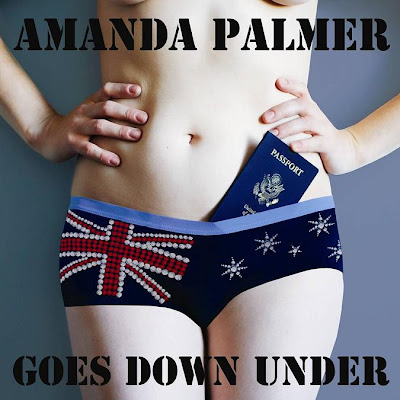 My long promised review of AMANDA PALMER GOES DOWN UNDER.

A singer\songwriter and pianist by trade I often liken Palmer to Tori Amos when asked to describe her style. Both musicians create piano-centric, deeply personal and emotionally steeped work. But whereas Amos’s inspiration seems to be rooted in the struggle between her musical creativity and her disagreements with organized religion, Palmer’s muse seems to be more chaotic in nature.

She reminds me of the perpetual theatre student, always pushing boundaries and trying new and experimental forms in order to convey her art. Take a look at her stage shows, they’re equal parts rock concert and fringe theatre piece. Performance and chaotic creativity seems to be in her blood.

Palmer has followed a very non-traditional path when fleshing out her music career. Before breaking into the music biz she worked as a living statue, busking in Harvard Square.

In 2000 she co-founded the Dresden Dolls, along with drummer Brian Viglione, a sort of punk cabaret drums and piano duo. And, in 2008, Palmer split amicably from the Dolls to strike out on a solo career.

Growth is a hallmark of Amanda Palmer. While I’m sure she could craft a laudable career writing songs in the same emotional vein her entire life she doesn’t seem content to rest upon those laurels.

She’s always becoming something else.

It’s always a double edged sword when artists stray to far from the sound that gained them infamy. While fans will respect the musician’s desire to keep learning, they may become less enthusiastic if the artist's sound changes too much in the process. Us fans types generally like growth, we just get squirrelly if we think its at expense of whatever it was that turned us on to the artist in the first place.

Strangely enough, pushing the boundaries of her sound doesn’t seem to trip Palmer up in the slightest. She’s equally at home putting out an album of ukulele covers of Radiohead songs as she is pounding on a piano until it bleeds.

And goddamn, if it doesn’t work.

Given all that, for the casual listener or accidental Dresden Dolls\Amanda Palmer fan there may be a lot of things about AMANDA PALMER GOES DOWN UNDER you find off-putting.

The album is strangely unwelcoming to new listeners. A curious combination of studio work, live recordings, cover material and new work; the album’s cultural specificity may throw up unintended barriers that prevent it from being universally enjoyed by fans across the world.

Of course, that’s a lot of b.s., good music is good music whether its talking about an Australian sandwich spread or crafting a tongue in cheek new Kiwi anthem. Being Australian might help the album resonate a little stronger with the listener but it shouldn’t stop the rest of us from enjoying the work of a talented songstress.

After all, hailing from Oz didn’t stop people from enjoying Men at Work in the 80’s (though it should).

But its all here, her punk cabaret roots, her piano driven intensity, the theatre showmanship and the ukulele undertones. She effortlessly wraps up these diverse creative elements and creates a strong album that capitalizes on the energy of the live audience.

I have a very peculiar way of breaking in a new album. I’ll listen to the whole thing a couple times before I start hitting repeat on the songs that hit me the hardest, in this case it was Bad Wine and Lemon Cake a dark\mournful duet about the difficulties of a quiet life. Using that tune as a gateway drug I’ll start branching out slowly into other songs tasting them one at a time, sampling their flavour.

And, there’s something for everyone on this album. While it may sport a dearth of catchy radio friendly single’s, that shouldn’t stop you from listening to upbeat and catchy tunage like Map of Tasmania and New Zealand if that happens to be your thing. Traditional Palmerites will want to check out In My Mind and Doctor Oz to get a taste of the soulful chanteuse that is always lurking just beneath the surface of Palmer’s cheerful exterior.

Despite my declarations that good music is universal I’d still consider AMANDA PALMER GOES DOWN UNDER to be more for serious fans than I would for someone looking for an easy jumping on point for her work.

Search out the Dresden Dolls and Palmer's early solo material, before coming back to this album. It’s a beautiful companion piece for a skilled and complex artist.
Posted by Chris at 9:01 AM