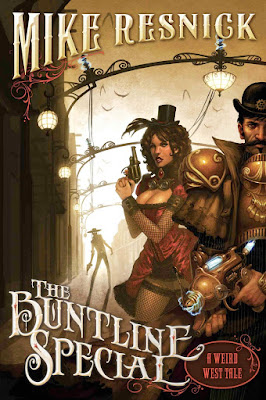 Where I got it: Review copy sent from the fine folks at PYR.

Mike Resnick’s THE BUNTLINE SPECIAL is one of those books resembles (to me) a b-movie or genre flick. It’s clever in its idea and invention and even to a certain extent in its execution.

Sadly, that works as a detriment here. For a story that is (essentially) a retelling of the gunfight at the OK Corral, there is simply not enough meat within it that is different to make it all that worthwhile. The Wyatt Earp/Doc Holliday/Tombstone story is so well known that simply adding steampunky or rather electric and brass to it is not enough.
The book is decidedly dialogue-driven. This makes perfect sense to me because we don’t need long passages and descriptions of the time and era. We know about those things already and the only real illumination we DO need is of the alternate-ness of this weird west tale. Like a cyborg Thomas Edison, brass-armored Gatling gun-wielding lawmen, brass and electric stagecoaches, or Indian Shamans that are really magic ect. Thankfully, all these tropes are displayed and explained and it really does work in the manner in which it is intended. It’s clever and interesting to see these things layered over our own version of the Wild West, and this well-known story in particular. The issue arises from me thinking, “Is this quite interesting enough? Am I compelled to reach the end of this story?” and the answer is not as much as I’d like. Why? Simple. Because I know how it ends. It doesn’t stray too far from the actual events and not enough is added in to make me really be concerned about where it will al l end up. In the end that aspect of it made this story be unique, but altogether unsatisfying once I’d finished.
It’s not a bad book at all mind you, through the flaws shines some really fun and inventive gadgets and sequences. The main storyline plows along at a decent pace and as I said before it only suffers from a lack of surprise as things progress pretty much exactly as you assume they will. This is my second foray into the steampunk territory, and it doesn't even really fall into that category, so perhaps I should just call it an alternate history book instead. As such I find myself with an improvement in the sub-genre (the first book was THE HALF-MADE WORLD by Gilman), with a much simpler tale. It’s just one that I would equate to a decent hour of television during prime time. Is it cool? Yeah it is. Is it compelling? Not particularly.  Is it fun to read? Certainly. Just don’t expect it to stray too far from the mythos of the Earps and Tombstone and you’ll be just fine.
Resnick is a fine writer and I would actually like to see him tackle another story set in this world with unknown characters in a new situation as I really think that would shine far more.
Posted by GunMetalBlue at 8:52 AM