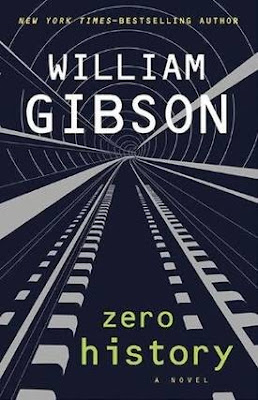 Former punk rocker Hollis Henry has a problem. Well, that’s not exactly fair, Henry has many problems but right now putting together a little money would go a long way towards dealing with the most pressing of them. Enter marketing guru Hubertus Bigend. He has a knack for making money without even having to work for it. Bigend has a job that needs doing and he thinks Henry is just the woman to get it done.

The world of fashion is a cutthroat one, literally. Which shouldn’t be a surprise to when you consider that the greatest fashions of today are based on American military designs. Bigend wants to discover the identity of a nameless designer, who seems to be creating timeless clothes that transcend the destructive trend of seasons. He hopes that Henry’s music industry connections will help provide some new leads where his own efforts have stalled.

Bigend hopes to enter the insular world of fashion by designing and selling uniforms to the American military and he suspects he could benefit from having this mysterious designer work for him. Only he hadn’t counted on catching the attention of some retired military personnel who don’t take very kindly to sharing the wealth.

Now events are starting to spiral out of control and even Bigend seems powerless to prevent a catastrophic confrontation from occurring.

Beginning with PATTERN RECOGNITION in 2003, and followed up by SPOOK COUNTRY in 2007, ZERO HISTORY carries on the Gibson tradition of mining the intersections of the far flung tendrils of popular culture for story material.

Which is really just a polite way of saying I read an entire book about the seedy underbelly of the fashion world…and I liked it.

Gibson is at his best when he inhabits that rarefied plane where future technologies overlap with the present world, it’s an exclusive genre that has spawned a host of imitators but few innovators. He has a way of combining theoretical or fictional technologies (at least I hope some of them are theoretical) with existing tech so seamlessly that it can be difficult to pinpoint what’s real and what’s not.

At its heart the Bigend Trilogy is all about the difficulty in asserting one’s identity against a backdrop of competing forces that seek to erase that same individuality.

Throughout the trilogy we are shown how technology can be used to reframe our personalities.

We are spied upon, tracked, catalogued, analyzed, edited, deleted and put in storage at the touch of a button. And the fingerprints we leave upon the world no longer belong to us, but rather are owned by an unstoppable, invisible and insatiable public consciousness that claims possession over everything it touches.

ZERO HISTORY centres around themes first put forward by Gibson in the pages of PATTERN RECOGNITION, how what we wear on our backs can define our place in the world and sublimate our own personalities.

While taking an extended look into the world of fashion might not appeal to everyone, I know I balked at tackling the subject at first, even the most disinterested reader has to acknowledge that fashion permeates every facet of our life and only the merest tip of it is related to clothing.

Fashion has a language all its own. The cars we drive, the gadgets we play with and the way we communicate are all designed, everything about them is constructed for a specific purpose which is communicate to others even when we ourselves are saying nothing. This language conveys status, wealth, knowledge and a host of other subtle social markers that the wearer\holder\buyer might not even be aware of.

That is why the nameless designer in ZH is so important. Gibson suggests that her designs are so pure and so simple that much of the static in their message is simply wiped away. They speak without subtext and thus their value is instantly recognizable.
(I started out writing a review and somehow ended up writing an essay.)

Reading a William Gibson novel is a bit like stumbling into the middle of a conversation where both sides are communicating in hand gestures. You’re never really sure that you understand exactly what is being said. The meaning of the conversation always seems to be elusive and untouchable. And while Gibson is great at stimulating the reader intellectually, his character work could use a little sharpening. He tries to create fully fleshed three dimensional characters, but in reality he crafts mobile info dumps that he can move around like chess pieces in order to get everyone in place for the book’s climax.

Its no coincidence that the only character to appear in all three of the books is Hubertus Bigend. Bigend plays the role of puppet master, his job is to appreciate and exploit the human psyche so he can find innovative ways to sell them material goods. In many ways the character of Bigend perfectly embodies free market capitalism. Everything can be bought and sold and people are just another commodity for him to manipulate. But if Bigend is the capitalist monster come to life he is still a benign one. He doesn’t seek power and money but rather knowledge and understanding. It is only when his desires goals are jeopardized will he be ruthless and unforgiving.

He never does the dirty work himself, instead he hires worthy individuals to do the work for him. Against the backdrop of Bigend’s machinations other characters try to walk the thin line between keeping true to themselves and performing the tasks they were hired for.

This is Henry’s core dilemma throughout the book. She knows that Bigend is not inherently bad or evil. But rather he exists as a disinterested demi-god, interacting with humanity when it suits his needs, but otherwise marching to the beat of his own drum.

Unfortunately readers new to Gibson’s writerly quirks may find the structure of the book a bit off-putting. Three quarters of the ZERO HISTORY reads like an extended conversation between interchangeable and emotionless robots. It’s a lot like hearing a speech by a really good social studies prof. And its all interesting stuff if you’re into that. But if you’re looking for more cause and effect and traditional narrative in your sci-fi readage…them maybe you should keep moving on.

Its really only in the book’s final chapters that Gibson remembers he needs to do more than educate the readers, he needs to entertain them as well. So he engineers a dramatic trade off between Bigend’s unit and a private military contractor protecting his turf.

Even then its hardly a running gun battle, the entire scene is told through the POV of a handful of people watching events transpire on CCTV monitors, (which is in keeping with the book’s theme of the alienating power of technology.) So it’s a climax by proxy, any action experienced by our lead characters takes place off the page and is only talked about. No one ever gets their hands dirty.

In ZERO HISTORY, the characters are always clean, sterile and removed from the action, the danger always purely theoretical.

William Gibson is not for everyone. He definitely operates on a rarefied plane that won’t appeal to all comers. But you can’t deny the man has a talent for generating new and interesting ideas. Once you crack Gibson’s writing style the reward for your labour will more than outweigh some of the duller stretches of his prose.

ZERO HISTORY is more than just an examination of the world of fashion, the story has loftier ambitions than that. Rather the book tries to create correlations between fashion and communication and technology. And while the book may have its flaws pushing boundaries and trying new things isn’t one of them. I recommend it.
Posted by Chris at 11:55 AM