Note from Scott: This is a book review from Iceberg Ink's first guest reviewer who goes by the name of Phil. Please enjoy his review of The Quantum Thief by Hannu Rajaniemi. 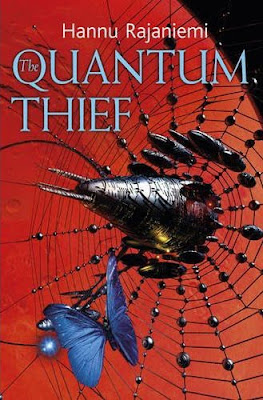 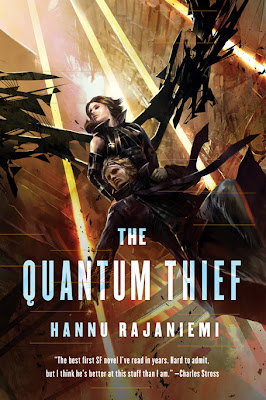 "It's layers and layers of secrets here." I grin. "I'm sure, somewhere, the old me is enjoying this. Honestly, he might have been too clever for us by half."

Jean le Flambeur is a post-human criminal, mind burglar, confidence artist and trickster. His origins are shrouded in mystery, but his exploits are known throughout the Heterarchy - from breaking into the vast Zeusbrains of the Inner System to steal their thoughts, to stealing rare Earth antiques from the aristocrats of the Moving Cities of Mars. Except that Jean made one mistake. Now he is condemned to play endless variations of a game-theoretic riddle in the vast virtual jail of the Axelrod Archons - the Dilemma Prison - against countless copies of himself. Jean's routine of death, defection and cooperation is upset by the arrival of Mieli and her spidership, Perhonen. She offers him a chance to win back his freedom and the powers of his old self - in exchange for finishing the one heist he never quite managed...

Before we begin, I guess there's something I need to come clean about. I've put off reading The Quantum Thief in the past, not because it didn't sound like my kind of thing (it did), and not because I'd heard bad things about it (the complete opposite), but because I'd seen the (UK) cover art and it struck me as some crappy old knockoff, all garish red with sparkly butterfly and everything. I must have clicked on the Amazon page four times before veering away at the last minute, but finally it was a barrage of recommendations from acquaintances whose opinions I trust that tipped the balance. I like to think I wasn't judging the book by the cover, rather the kind of style it suggested.

I have to admit, it didn't start too well for me. I'm a fan of the past tense, always have been. Rajaniemi's choice of present tense (mixing up first and third person) is an interesting one, and bold for an sf debut. It's generally not to my taste and it took me a while to settle into it, however it brings an urgency to the narrative and a sense of fluidity to the action scenes--of which there are many--that would have taken on a whole different feel if everything had taken place in the relative comfort of the past. The tech is fascinating, the world significantly different from the one we're used to that the first hundred pages or so is almost a battle to keep up with the vocabulary. Every page is dotted here and there with Rajaniemi's future-speak: gogols and gevulot, qupting and Quiets. There's no glossary and the reader's on their own for the first third of the book. When the author does take the time to sit back, ruminate on a few of his inventions, it's sometimes too late and you'd already worked it out fifty pages ago. Sometimes he seems to have forgotten altogether and I have to admit to coming away still a bit unsure about one or two aspects of the culture he's built. But that's ok; if you missed something, there's another ten or so ideas already winging their way to you to keep you busy. If you're the type who has to understand everything to its smallest detail, you may be fighting the urge to go back and re-read that last section, only to find it didn't make much more sense the second time.

The opening is strong, the first couple of chapters a mash-up of action and high concept sf, before the reader is whipped elsewhere and a more typical setting is given chance to build the story from the ground up with a more traditional plot platform (one of the main protagonists, Isidore, can be summed up as an altruistic PI accepting an intriguing job from an eccentric billionaire client). It's a shame we don't get to dwell on the Dilemma Prison, which is where the story begins and in itself could probably form the basis of a great concept novel. The first half really disappears in a whirl, with so many unfamiliar concepts thrown at you it's a little difficult at times to see where the story is heading. In fact, the main protagonists' goals remain hidden for most of the book (unless my addled mind failed to grasp it amid baby Archons, Prison breaks and pellegrinis), which I can't help but feel is a reflection of the fact that this is Rajiniemi's first novel and he wanted to emphasize the mystery and caper aspects of the story a little too much. It's a very strong debut though, with nimble dialogue and a garage-full of themes and partially-explored concepts which I suspect will be fleshed out in future installments (The Quantum Thief being the first in a trilogy). I particularly would have liked to get to know the enigmatic tzaddikim--masked vigilantes with access to sleek and sexy tech--a little better than we're allowed to here. There is a definite and deliberate element of Alan Moore's Rorschach in one particular tzaddik known only as the Silence, right down to the inkblot meme, which I think could have been explored further without getting too close to already established ground. We only ever really get to know one of the tzaddikim in any detail at all, which is a shame, but I'm sure there's more to come. Without giving anything away, it's made quite plain in the final scene that Rajaniemi has plans to open up his universe in the follow up, while also satisfactorily (if a little too neatly) tying up all the relevant threads here.

Rajaniemi has a background in physics, so as you'd imagine the science is dependable and thought-provoking, though on occasion some of the gadgetry is explained away a little too easily. For instance, we're told that gevulot--a kind of personal firewall linked to a planetary-wide memory cloud--is possible because of a specialized organ. This felt a little lazy since he's essentially resorting to fancy biology rather than describing technology, however the manner in which the concept is explored more than makes up for any slight reliance on throwaway reasoning. How would it feel to meet a stranger and not be able to remember their face, their mannerisms, what they said or the fact that you even had the conversation without first setting up a temporary, mutually-beneficial gevulot contract? A major theme of the book is exploring the consequences of breaking the trust required for such a system to work, and it's this exploration of the questions he raises where Rajaniemi really excels.

Overall, it's a lively, engaging and fast-paced piece of hard sf. Rajaniemi certainly knows his audience, and he's ever ready with the pop culture references which are probably guaranteed to make him a firm fan favourite (though I personally found the MMORPG-based society a little too over the top). There's a lot of promise shown for a first novel, and it's matched by very solid writing. I find myself wishing The Quantum Thief had been a standalone so we could find out what else the author has to offer, however there's enough of a hint of what's still to come in this series to make sure I'll be picking up his next book, no matter how bad the cover is.


-Phil
Posted by GunMetalBlue at 5:53 AM