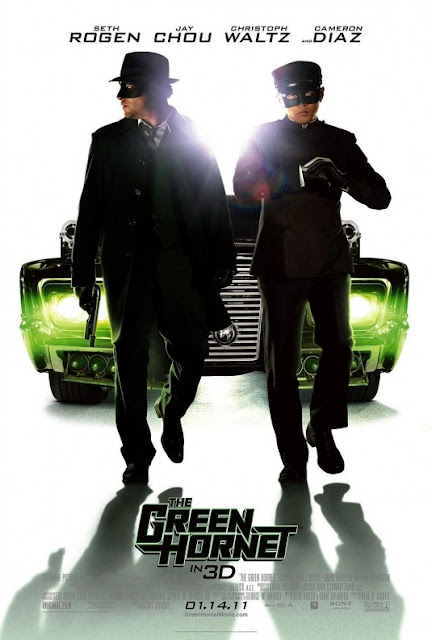 Seth Rogen is one of those guys that just makes me laugh. Even his laugh itself is relatively infectious. However, it was with a certain amount of trepidation that I went to see the Rogen/Goldberg written (SUPERBAD, PINEAPPLE EXPRESS) Michael Gondry directed (ETERNAL SUNSHINE OF THE SPOTLESS MIND) superhero/comedy THE GREEN HORNET this past weekend.
Now, I am not old enough to remember the 1960’s TV serial, am I am certainly not old enough to remember the 1930’s radio serial. I DID have a little car toy of Black Beauty though, the Hornet’s car, a sleek black Chrysler with green headlights and chrome detailing. I remember playing with that as a kid and thinking, man this is a cool little car. To me it was even cooler than the 1960’s Batmobile.
That is my only experience with the Green Hornet character, a kid with a cool black car toy which I am sure I wondered if I could ever drive its like.
Rogen/Goldberg/Gondry’s THE GREEN HORNET is a surprisingly, fun and entertaining film. Rogen’s humour abounds and suits his character of spoiled playboy Britt Reid, son of a newspaper magnate. Add to this the second main character of Kato (Taiwanese pop star Jay Chou), Britt’s fathers’ mechanic who has a penchant and skill for designing gadgets and martial arts, and you have the makings of a very interesting duo.
The two together are such an ideal pairing that every minute they share on screen together, there is something interesting to watch. Whether that is Britt exclaiming something is awesome, or really scary, or Kato seemingly moves faster than light while his enemies move like molasses as he beats them silly, or the two put their heads together to make everything blow up around them using cool gadgets, THE GREEN HORNET fires on all cylinders for most of the film.
That said, the film is not a perfect outing. About an hour into the film, Cameron Diaz shows up as secretary Lenore…and whether she exists as a love interest for Britt, for Kato, or for the two to fight and then bond over she really does kind of just stand there. I wouldn’t use the term wasted, but there is really not a lot of reason for her beyond the catalyst for the bonding fight between the two heroes. The film is also a tad overlong and might have benefited from some trimming in the editing room.
If you enjoyed the humour of PINEAPPLE EXPRESS, and the expensive gadgetry of BATMAN BEGINS then you are certain to like THE GREEN HORNET. It is a fun, adventurous romp that plays deftly along the border between action and comedy, while its two leads dance along that fence never letting anything really fall into the gaps.
Probably one of the most solid January film experiences I have had in recent memory, and was enjoyed enough that I would see it again if the opportunity arose.
Oh, and the car...Black Beauty....is gorgeous in every single frame of the chasing, gun shooting, gadget wielding,  green headlight shining awesomeness. The kid in me squeed with unbridled excitement at seeing it int action like this. Also: WANT!
A Note on the 3D: The film was converted to 3D in post-production (something studios keep pushing for even at detriment to the films themselves). However, as opposed to a lot of other films converted in post which look murky and jarring and annoying, THE GREEN HORNET is bright, clean and easy to watch. I didn’t have any trouble with the 3D, but it IS converted for no real reason so you don’t have to see it that way and will enjoy it just as much in 2D.
Posted by GunMetalBlue at 7:40 AM