We were transitioning june-ya to daycare this week, and I took some time off in case there was a meltdown or some child on child violence. (Mine would win) Thus I was late in getting to my LCS and writing up everyone’s favourite comic book reviews.

But what I lack in timeliness I make up for in biased opinions and half-assed writing. And today, you’ll get both of those in spades. 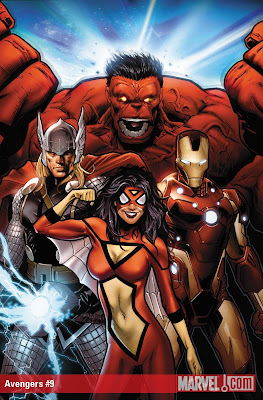 The Avengers continue their quest to discover the identity of the thief who stole the Infinity Gems. Of course all that gets derailed when Steve Rogers discovers the existence of illuminati led by Iron Man who have kept the location of the Gems hidden. Cue several pages of Civil War redux where Rogers and Tony Stark posture and preen and re-ignite their not-so-passive-aggressive hate fest.

Bendis writes 22 pages of talky-talky. JRJR draws 22 pages of pretty drawings. This comic book is exactly what you think it will be.

Green Arrow is a character that’s had a lot of difficulty finding any stability lately. He’s been a bloodthirsty vigilante, a reluctant father, a proto-Batman, complete with arrow-themed sidekicks, and a confident family man. But none of these interpretations have successfully taken. The character seems cursed by an endless cycle of rebirth that comes complete with a new creative team and a new direction for the hero. Constantly set upon by the whims of editorial it seems like we’re always trying to understand just what it is that makes the Green Arrow tick. Thankfully, J.T. seems to be aware of that fact and he’s chosen to take a slow burn in develop the characters new status quo. He’s reinvented GA as the Robin Hood knockoff that he clearly always been, complete with his own group of Merry Men. The central theme of this title has always been about the various characters exploration of their own motivations and desires. The subject of identity comes to the forefront time and again. ‘Who am I and what do I want’ is a question asked by hero and villain alike. Everyone is searching for something in themselves and a mythical forest, which offers up only more questions, is the perfect backdrop in which to do so.

In this issue Lois Lane drops by to take a look at the magical forest that has sprouted up in the middle of Star City. (An aside: are we officially calling this forest magical now? I thought it was a byproduct of the White Lantern energy.) Sherwood Forest has begun to attract attention from both the scientific community and the DCU’s magic-based underbelly. The two sides collide as each of them struggle to understand the meaning and purpose behind the forest’s appearance. It’s a good issue, a solid attempt to understand and explain the rules and circumstances that GA now has to operate by. It doesn’t reach for the stars but instead chooses to focus on smaller and ultimately more satisfying personal internal struggles.

The Marvel family, one of DC’s more poorly developed properties, continues its long slide into creative marginalization. Ever since the poorly executed weekly series, COUNTDOWN, Captain Marvel and the gang have been little more than jumped up lab rats for various DCU creators to experiment with. Mary Marvel’s character was altered beyond recognition, Billy Batson was shuffled off into expositional irrelevance, Freddy Freeman’s rebirth as the new Captain Marvel was robbed of any impact whatsoever by a disappointingly received mini series that was plagued by delays and the most successful character of the bunch was the super villain and perpetual faux Superman foil, Black Adam.

In this one off, meant to catapult the Fawcett characters back into the DCU proper X X starts with the germ of a good idea; ‘Why does everyone granted the powers of Shazam inevitably squander their gift’ and turns it into a 22 page slugfest. Nothing of importance is revealed, nothing of consequence happens and nothing about this issue makes me think the Marvel family is on the verge of a creative renaissance. This wasn’t a bad issue, it just didn’t strike me as anything to get excited about. And its a sad reality of comic books in the 21st century that while you may not have to hit a homerun everytime, you definitely won’t get very far doing the same old thing.

Wonder Woman battles against the Huntsman, a minion of the Morrigan, the god of war personified by three deities.

J. Michael Stracynski’s aborted Wonder Woman character reboot seems to be bearing fruit. Like Green Arrow, Wonder Woman is a character with a long convoluted publishing history. Her execution in her early stories seems at odds with her characterization. That’s not the only contradiction inherent in Wondie’s makeup. It’s a difficult to stand as an icon of feminist ideals when you’re reduced to fighting crime in your bathing suit. Some writers have twisted themselves into a pretty pretzel in order to explain her garb and her backstory, but the truth remains she’s a hard character to write well.

I know it could be argued that rebooting a character is the lazy way out and normally I’d agree. But I’ve seen Wonder Woman as the Amazon warrior, the ambassador to man’s world and the superhero crimefighter. And none of these interpretations works for me. They’re too safe, too pat. Her character is too sure of herself and whenever an author attempts to graft insecurities onto her frame it always comes across as forced. Stracynski’s back to basics approach, an exploration of a woman trying to define her place in a world that isn’t her own, allows for character growth and exploration that the original incarnation just couldn’t handle. I know the reboot won’t stick, but it’s got me reading a Wonder Woman comic for the first time in 31 years. So that has to be worth something.