BEST OF THE WEEK 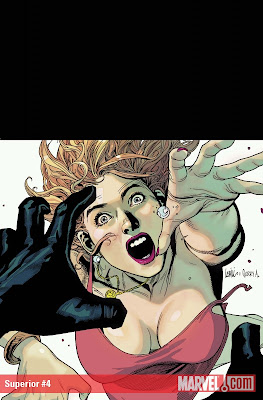 I know, right? Trust me, I’m just as surprised as you are. Welcome to the continuing adventures of Mark Millar’s Superman analogue, Superior, and this week’s Six Sentences or Less... Best of the Week. In this issue Superior meets his Lois Lane counterpart, Maddie Knox, helps his friend out with the local bully and, oh yah, volunteers to help end the war in Afghanistan.

With that last point Millar is clearly riffing off some of the material he was exploring in ULTIMATES 2, namely if superheroes really existed would they feel or be compelled to enter into their country’s war efforts? This is hardly virgin territory. Take a look back at some of those World War II era comic books where your favourite DC heroes stepped up to take on the Axis armies. But after the Comic Code came along it was deemed that superheroes were destined to stop bank robbers and fight their way out of elaborate death traps. And so the motifs of the modern superhero were forged.

Having said that, I think the question of why mainstream superheroes don't fight in wars is one worth answering. Thorny and nuanced political motivations aside, surely its not that big a leap to go from stopping an alien invasion to routing out terrorist cells or fighting alongside soldiers. The basic principles at play are the same. There are people with weapons trying to inflict damage on other people and you need to put your life on the line to stop them. If superheroes existed in real life are we so naive to believe that they would be blind to the good they could do on behalf of their fellow countrymen during war? Patriotism doesn't vanish just because you can bench press a tank. Its hard to belive that the Justice League would go out and stop a genocidal alien conquerer but then draw the line at meddling with wars on Earth, because, you know, 'politics are scary.' Hell, even Superman isn't immune to call of home and hearth, fighting on behalf of Truth, Justice and the American Way.

Some comic books sidestep the issue of superheroes and war by portraying the government as corrupt or the soldiers bloodthirsty quasi-criminals, thus giving the hero a moral reason to remove themself from the fray.

Aside from the fact that war is bloody, graphic and fairly unheroic, if hyper-powered heroes actually did decide to wage war the whole thing would probably be over fairly quickly and it would beg the question 'what took you so damn long?' Periodically Superman does develop a god-complex and sets out to protect the entire world, but somehow events always transpire to show him that he’s better off sticking to his little corner of the globe.

No, better our funny books ignore the issue altogether and go back to giving us our four colour slug fests.

The great thing about Millar’s reinvention of Superman is that he’s not trapped into the traditional prudish trappings of the character. Superior can swear, threaten little kids with death and volunteer to go to war on behalf of his country and its all totally believe within the confines of the character.

Some bloggers like to talk about how today’s modern superhero comic books are violating the sanctity of their childhood. A sentiment that I see repeated frequently is that in the rush to make long established characters dark and edgy the core elements that define these characters are often abandoned. That’s only part of the story. In reality, writers were handcuffed for decades and the freedom to take characters to darker places was often was often denied them. So all that’s happening now is that the depths of these decades old characters are now finally being fully explored. Unfortunately that means portraying them in a fashion that readers are unfamiliar and uncomfortable with, hence the angry backlash.

What makes a character like Superior so great is that Millar is able to play around with all of Superman’s powers but bypass his restrictive mid-western upbringing and stupefying continuity. All things considered, given Millar’s history of extreme subject matter in his comic books, SUPERIOR is relatively tame. Sure there’s some swearing but what human being wouldn’t drop the F-bomb given the discovery that they have superpowers. And considering that DC is so anal retentive about their intellectual properties that they editorially mandated that an adult Clark Kent can't be shown sharing a beer with his father, its refreshing to see an adult version of the character that doesn’t treat its readers like they’ll be emotionally traumatized if their idol ever does something human.

Marvel continues its proud tradition of renumbering their series with their latest issue of IRON MAN. I’m not an IRON MAN reader so I was grateful to see that this quincentennial issue was a (mostly) self contained story. The art was good, the writing passable. So I’ll probably check in again in another 500 issues. See you then.
Posted by Chris at 6:50 PM