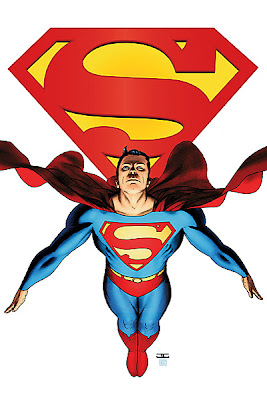 The problem with Superman is that he’s just too powerful. This is hardly a shocking revelation. Superman has two basic methods for getting out of a scrape. Punching something really hard, or using another of his many powers in a unique and inventive way, usually to help him circumvent some elaborate deathtrap. In far too many aspects the Superman of today is the Superman of 10, 20 or 30 years ago. His supporting characters are mostly the same, his powerset is the same. His origin? The same. I think out of all the big name comic book characters being published today his is a story whose basic elements have hardly changed at all. Which means, after nearly 80 years, his adventures carry a certain repetitiveness and staleness to them.

Compare Superman to someone like Batman who has seen so many incarnations he never seems to grow old. Over the years we’ve seen Batman portrayed as a light hearted crimefighter, a dark and brooding vigilante, a crack detective, a billionaire playboy and a focused martial artist. And nearly every re-interpretation of the Batman mythology manages to work for its time.

And that’s the key phrase there, ‘for its time.’ In comic books it seems that a constant cycle of renewal and rebirth is necessary in order to reframe characters within the context of the present day. How else could you explain the resurgence of Hal Jordan and Barry Allen within the DCU? (Ok the short answer is there Geoff Johns, but a longer explanation would show that these characters have newfound relevance because, although their core traits remain the same, the world they function in has been reshaped to provide the perfect dramatic counterpoint to their personalities and abilities.)Their characters and lives are no longer frozen in amber, in a era that most contemporary comic book readers never even lived through.

Superman gets no such character revamp. Oh, occasionally he’ll turn blue, grow his hair long or even work at a television station. But even his death in the 90s didn’t significantly alter the world he was living in. After he was done fighting crime for the day he still went home to Kansas to stop in on Ma before meeting up with Lois and filing tomorrow’s headline for Perry. No major overhaul of Superman’s existence has ever stuck. Which is why we constantly feel like we’ve seen it all before.

It’s a shame that DC is so frightened of destroying the bankability of their most recognizable character that they will allow him to atrophy and wither away into irrelevance, rather than take a chance at re-examining his makeup.

In fact, Superman’s world actively resists reinvention. Readers have become so ingrained to seeing Superman look and behave a certain way that we get uncomfortable seeing him step outside of his little prefabricated box. We’re like the old time convicts in THE SHAWSHANK REDEMPTION, too acclimatized to the way of doing things to ever really feel comfortable out in the real world. Oh sure, we can read and love our ALL-STAR SUPERMAN and our Elseworlds stories, but those are temporary and impermanent, a refreshing look at what could be and never a serious threat to the Super status quo.

Which is why the ‘Grounded’ storyline currently running in the Superman titles is so grating. Instead of seeing Superman going around being, well super, we’re treated to the incredibly ho-hum sight of seeing him try to reconnect with humanity. And that’s not his job. That’s Clark Kent’s job. The whole reason Superman persists in keeping up a secret identity is so that he can walk amongst the rest of us without being recognized for who he really is.

Its completely disingenuous for Superman to be hanging around in his cape and tights pretending to be one of the guys. Its a bit like going drinking with your boss. He might be funny and great to hang around with, but you never really forget he’s your boss. So you drink and laugh at his jokes and you have a good time, but you secretly wish he’d move along so you can just relax and be yourself. Having Superman just walking around as Superman is exactly like that. It’s almost as if he wants to be recognized for his ‘sacrifice’ of being regular. But no one’s buying it. We all know what regular people look like, because that’s who we are. We look to Superman for greatness, to be more than regular - because that’s who we want to be.

The first of two offerings from Paul Cornell this week. Batman and Robin conclude their struggle against the new Bat-villian, The Absence. It’s always a treat to see Scott McDaniel working on a Batman related title. And although sometimes his pencils can seem a bit rushed I find that most times their energy and dynamism really adds another level to whatever project he’s working on.

And another solid effort from Paul Cornell as well, who’s been playing a bit of a shell game with both Batman and Robin as well as the reader, seemingly telling the story of the Absence’s obsession with getting revenge on Bruce Wayne. In reality, the Absence has much more easily obtained goals in mind and delaying Batman and Robin will only help to further her cause.

Can I just say how nice it is to see an honest to goodness olde tyme death trap in comic books again? Without making it seem hackneyed or clichéd Cornell creates a tight scene between our heroes and the villainess, which reveals a heck of a lot of characterization by all the players involved while still moving the plot forward. Loved it. What a great way to play with the tropes of the genre without falling victim to their weaknesses.

Have you heard the news that DC is developing an ongoing RED LANTERN series? Apparently three ongoing GL titles aren’t enough to satiate the hunger of the hundreds of slavering Green Lantern fans. Out of all the possible series to emerge from the newly minted post-Blackest Night Rainbow Warriors a Red Lantern series comes at the absolutely end of my list. A corps built around rage, violence and a tendency to vomit up blood? It sounds like a rejected high concept 90s Image title. I’d much rather see a Larfleeze or even a Sinestro ongoing before I skim over the adventures of Mr. Ouchies and the gang.

Abandoned by Kilowog and Arisia for keeping them in the dark about the true nature of his mission in the Unknown Sector Guy Gardner is forced to take Bleez with him to confront the unknown force that is slowly draining the power from the Green Lantern rings. If you’ve read the first five titles of this series you know exactly what you’re getting into here. Dynamic penciling, snappy writing and a ripping good tale. Of all the GL stories currently being told, Warrior easily stands out from the rest of the pack.

Ever heard an embittered comic book blogger to tell you to vote with your dollars? Or that bad comic books continue to be made because fans who don’t any better continue to throw good money after bad when it comes to questionable titles? Well, with KNIGHT AND SQUIRE I’m happy to be proven wrong. Initially I found the title uninteresting and its very Britishness detrimental to my enjoyment of the read. However, after time, its grown on me like a fungus and all the things that used to detract from its readability have now become its greatest strengths. I’m so glad that I stuck with this title as Paul Cornell has really managed to define the essence of this British Batman and Robin and define them in their own right, rather than portray them as cheap knockoffs of DCs biggest money maker.

In this issue Knight’s mechanized costume becomes possessed by a corrupt memory engram of Knight, causing the suit to believe that he is the real deal. Only the memory engram seems to be masochistically focused on reliving Knight’s greatest failures and mistakes. Cornell does a great job presenting us with a different take on what makes a superhero. So many heroes seem to be defined by the need to fight crime because of some injustice in their past. While the Knight is a legacy character who manages to overcome his own doubt and failures and be a hero in spite of his fears. Rather than giving into an emo, woe is me take on the character Cornell presents him almost as a recovering alcoholic (which in a way he is), cheerfully optimistic and determined to take each challenge one day at a time. A great read.
Posted by Chris at 6:53 PM