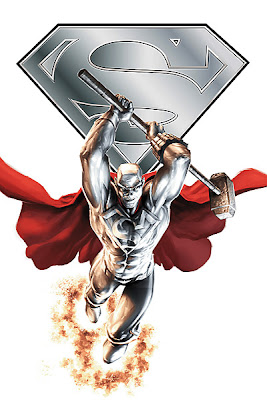 STEEL #1
When I first started hearing the rumblings that Steel was going to be killed in this one shot that kicks off the Reign of Doomsday crossover I was pissed. I started mentally preparing the diatribe that I was going to write, castrating DC for killing off one of its most criminally underused characters. Thankfully it seems the whole “Steel dies” rumour can be blown off as rampant Internet speculation as it doesn’t look like the company has decided to go that route after all.

Anyway, in this issue Steel and Doomsday square off against each other in downtown Metropolis, mirroring the epic battle that killed Superman years earlier. The story is intercut with snippets of backstory from Doomsday’s first rampage through Metropolis, describing how Steel temporarily stepped in for Superman after he died.

Essentially the whole story is one giant fight scene. Penciller Ed Benes does passable work on the art, but neglects to actually draw the background in a good 70% of his panels. And unfortunately, from a narrative perspective, the whole story is a bit of a hot mess. I’m not familiar with the work of writer Steve Lyons but it seems like he forgot the most important part of any story, an inciting incident. There’s no explanation about where Doomsday came from or how he ended up in Metropolis. In fact there’s no lead up or lead in to the story at all which is really disappointing. Rather Doomsday is just...there...and if you think about it for too long you’ll come to realize how poorly this thing is written.

Steel and Doomsday are both characters who’ve had a difficult time establishing a stable ongoing presence in the DCU. Steel managed to hold down an ongoing series of his own for a few years after Superman’s return. Since then he’s chaired a spot in Grant Morrison’s JLA and returned as a partner of sorts in the Super-books in the early Noughties. But he’s never really managed to make it past supporting character status. Which is unfortunate because the character has amazing untapped potential, he’s tangentially tied into the Superman legacy, he provides much needed diversity in a comic book universe that seems to be getting whiter all the time and he has a rich and varied backstory just waiting for a good writer to come along and do something with it. Instead Steel has been reduced to playing the part of the occasional superhero or brainy sidekick type.

Doomsday is even less relevant. With a character about as deep as a sheet of paper and the powerset of Superman on steroids his only real worth has been his shock value, occasionally popping up in the Super-books before summarily being dispatched into some kind of literary limbo. There has been the occasional attempt to revamp his character into something a little less powerful and a little more intelligent in order to allow him to take on the role of a recurring villain. But nothing ever sticks and time and again Doomsday always reveals himself to be the one note character he was created to be.

So. Right now, my first impression of the Reign of Doomsday storyline is that it reads like a lazy attempt to interject some badly needed adrenaline into the Superman franchise by taking out one of its B-listers. Sadly, the Super-books have fallen into a black hole as of late after the War of the Superman\New Krypton storyline ended. It didn’t help that Superman has been plucked out of the pages of JLA, banished from ACTION COMICS, his own flagship title, and sent on a mind numbingly dull ‘walk across America’ by uber-writer J. Michael Stracynski. (A story so boring that even the author couldn’t be bothered to finish it before abandoning the title in favour of something else) So don’t be surprised if Supes decides to give up heel-and-toeing it across the Mid West for awhile in order to come back to Metropolis and avenge his friend. Clearly the thinking around the editorial conference table seems to be the about the need to raise Superman’s presence in the DCU and what better way to do so than by bringing back (again) the bad guy who killed him the first time. Whether or not there’s more to this crossover than a cheap attempt to goose sales figures and jolt the Super-books out of their creative complacency I couldn’t say. But with Steel #1 they definitely haven’t gotten off on the right foot.

I also read some other stuff this week...

STARMAN\CONGORILLA #1
I appreciate James Robinson’s efforts to mine the darker corners of the DCU in a quixotic attempt to reclaim some its lesser known characters. However, I am frequently stymied from enjoying the fruits of his labours by getting hung up on his dialogue ticks. I’m all for making comic character’s speech sound more natural and realistic, but I don’t know anyone, real or imaginary, who talks like these people do. And there is a LOT of expositionary dialogue here.

THE WALKING DEAD #80
Great as always. You did watch the television show right?
Posted by Chris at 7:27 PM