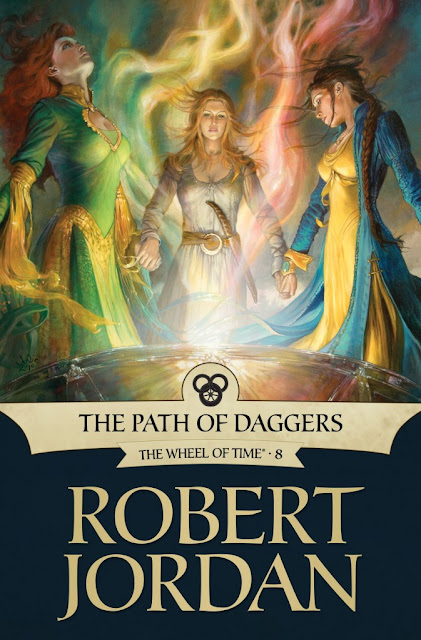 …and I finally fell into the doldrums pit of The Wheel Of Time series.

The 8th book, THE PATH OF DAGGERS was the magic number apparently. I am grateful it didn’t happen sooner as a lot of people seem to think things go astray in the 7th book (A CROWN OF SWORDS)…but I liked that one so I was good till number 8.

I tried my best. I really truly gave this one everything I had. I read the first 140 odd pages and all that had transpired was the supergirls (Nynaeve, Elayne and Aviendha) FINALLY used the ter’angreal The Bowl Of The Winds. Aside from some long boring discussions, sniffing, braid tugging, self-molification by Aviendha, and crooked looks between Aes Sedai and Sea-folk that was IT! Oh man, I couldn’t believe how long Jordan could draw it that out. It would be impressive, if it weren’t so damned frustrating. That said, after that sequence, Elayne nearly undoes everyone when the Seanchan attack…but even that didn’t save it for me.

Sigh. It was at this point I attempted the audio book version of TPOD. I figured that LISTENING to the boredom would be better than reading about it. And I was wrong. Boo. The two narrators (a hubby and wife team who shall remain nameless) are both so bad at their job that I wanted to throw my iPod across the room and hoped it embedded in the wall with enough force as to shake the foundations.

Okay, then I had a bit of advice from a WOT fangirl over at the Malazan boards, who said that the second half things pick up a bit and I ought to give it a chance. So I went back to reading it.

Thankfully the second half IS better. It’s not great, and by no stretch of the imagination did I love it…but I was entertained. I’ll give it that. The second half gets into some interesting things, but overall the problem lies in the fact that for a book that is damned near 1000 pages, the overall plot is driven forth only about 200 pages worth. It definitely set the stage for the next book, but I started to wonder if I wasn’t in for another round of boredom with that one as well.

I want to make sure you guys know I am still a BIG WOT fan. The first seven books are pretty damn fine all told, and though 8 stumbles I am not disenchanted at all.

I am past the 87-page prologue of the 9th book WINTERS HEART now, and I am happy to report that this one doesn’t seem to have as much of the boredom as the previous one and I am once again enjoying this series. So worry not WOT fans!

Also, I see light at the end of the tunnel as I hope to finish up the 10th and 11th books by years end with preparations to make January the month to read the two most recent entries in the series.
Posted by GunMetalBlue at 1:27 PM

Email ThisBlogThis!Share to TwitterShare to FacebookShare to Pinterest
Labels: Robert Jordan, The Path Of Daggers Review, The Wheel of Time