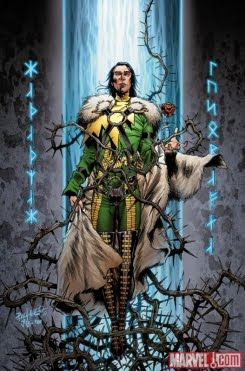 Presenting the continuing adventures of Ulti-Thor. Writer Jonathan Hickman takes us bouncing through time as Nazi Frost Giants threaten to invade Asgard in WWII, Thor and his pappy talk about the nature of divinity and a full blown identity crisis in the European Super-Soldier program as they try to make heads or tails of their godlike newest recruit. This is a ripping good yarn. Hickman is able to take a relatively minor subplot from the ULTIMATES 2 miniseries and use it successfully as a framing device for this title. He writes fully fledged characters, with strong motivations and enough mystery and intrigue to make reading this title. And all backed by Carlos Pacheco’s pretty pictures. God, some days I love comics. But what impressed me most of all was that Hickman was able to use the established continuity of the character and grow the world; without having to resort to some of the worn out plot devices some authors use when mucking around in someone’s backstory. Its nice to see continuity used for something besides a punching bag for unhappy writers.

So I read this issue. Then I read it again. Then just before I wrote this review I read it a third time and mucked around online to see what everyone else ways saying about it. Wow. Grant Morrison has capped off years of laying the groundwork for this story to deliver an absolutely epic tale. Picking up on events established in ROBW #2 Bruce flees from the death of time and space to return to the present. With him is the hyper-adapter set upon him by Darkseid during FINAL CRISIS. His only hope of surviving it is the help of some friends who’ve made an impressive career of pounding on baddies. This whole story is so dense and compact that repeat readings of it are a definite must for anyone interested in working out just how all the puzzle pieces fit together. The only drawback I have with this particular issue is that Morrison’s writing lacks the emotional resonance necessary to really drive the whole thing home. Grant’s biggest strength is that he is the smartest guy in the room. (Which means that he routinely deals with ideas and concepts that leaves the rest of us mere mortals scratching our grey matter in confusion.) Unfortunately Morrison often forgets the human component that transcends his weighty cerebral ponderings and makes reading these tales truly enjoyable; instead of rendering them a giant intellectual puzzle that needs to be solved before it can be enjoyed.

It never ceases to amaze me that the GL franchise is vibrant enough to pull off three ongoing titles. Four, if you feel inclined to include BRIGHTEST DAY (and I kinda do). Guy and company continue on their mission to discover the source of their power rings’ energy loss. They make a pit stop at Daxam in search of Sodam Yat only to discover that he is a wanted criminal and nowhere to be found. Meanwhile, Yat has flown off planet with a group of Daxam dissidents to create a new utopian social order. He seems to be nursing some sort of grudge against the Guardians. Whether this refers to the GL Guardians or some political faction on Daxam I’m not really sure. There can’t be TWO groups of GL supporting characters called Guardians, can there? Anyway, Peter J. Tomasi keeps the story humming and Fernando Pasarin continues to kill with his art. This title is rapidly threatening to displace GREEN LANTERN CORPS as my backup GL book of choice.

Yep, this title happened again. It’s still full of smart, witty British goodness. And it still leaves me feeling kind of meh. Which is odd, because I really want to like this series. Mayhap I’m just suffering from PHANTOM MENACE syndrome and I unfairly raised my expectations to a level that the book just isn’t able to deliver on. Anyway in this issue Knight and Squire take on a band of trans-dimensional folk figures, known as the Morris Men, who seek to return England to the good old days. The type of good old days where women were arm candy and men made all the decisions. It’s a mildly amusing story, but so far I’m not seeing any evidence of an overarching plot arc that is going to be woven throughout the miniseries and I’m not enjoying it enough to read six standalone tales about K&S. Oh, and there’s also a really ugly art error on the second page that caught my attention right from the get go. It looks like the page was printed at a low resolution because the whole thing is washed out and pixelated. Blah.

Not reviewed this week

My LCS always criminally underorders all HELLBLAZER titles. If you're a John Constantine fan and you don't make it to the shop by lunch time on Wednesday you, my friend, are shit outta luck. Today, that person was me. Which is a shame, considering that issue two of this title made BEST OF THE WEEK here at Icy Ink and I was really looking forward to where the series was going.