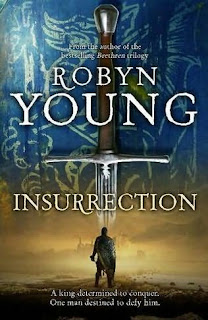 I stumbled across the wonderful Robyn Young two summers ago during my search for a book about the Knights Templar. There are a number of series of books out there by other authors about the Knight's Templar, but the majority of them just don't do it for me (of the ones I tried at any rate).

Thankfully, I found Robyn's Brethren series to not only be good, but entirely engrossing on a plot and character level while also presenting a decent explanation for the order's wealth and ultimate demise.

Young has since finished that trilogy a few years back and has been hard at work on a new series of books, this time about the wars for Scottish Independence with Robert The Bruce as the protagonist. Sufficed to say, I am excited.

The new site is up and running HERE and has all the needed info about her past series as well as the new ones. The site revamp, is quite well done and looks quite splashing.

So, if you haven't checked her out already, head on over and have a look. If you want to start reading her, try out the Templar series, it's very, very good.

Posted by GunMetalBlue at 3:27 PM