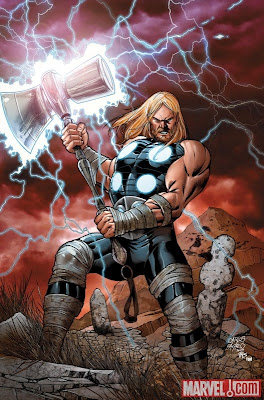 Ultimate Thor #1
I have a confession to make. I used to be in love with Marvel’s Ultimate line. When it first hit I thought it was fun, fresh and free of stupefying continuity. Then the line grew stale, Jeph Loeb happened and it never really regained its luster. ULTIMATE THOR goes a long way towards recapturing what made the Ultimate line so great. It’s about four years too late to turn the tide, but its a great read nonetheless. This first issue covers his Thor’s early years in Asgard, the fall of Asgard at the hands of the Nazi’s and his first Ultimized appearances on earth. Except for the 3.99 price tag, I can’t think of a single thing to complain about. Read it after The Ultimates 2

and I think it should blend into Ultimate continuity quite seamlessly.

Batman: Odyssey #4
Good lord, I’ve heard of purple writing before, but the scripting in this book is so overdone its hard to read it without breaking into laughter. I found myself constantly rereading several sections in the book, trying to get a handle on what’s happening in the various scenes and a grasp some feel for the flow of the story. I’m not sure why this title doesn’t have the Elseworlds logo on it. It’s clear that nothing happening in the title is part of the DCU proper. Instead, it seems like Neal Adams got inspired by Miller’s All-Star Batman

and is trying to push the character of Batman in the most ludicrous direction possible.

Brightest Day #11
While BRIGHTEST DAY may not meet the requirements to technically be considered part of DC’s strategy to put out a weekly comic, it certainly embodies the spirit of the plan. And, after 11 issues I feel confident in saying that it easily surpasses Trinity
Posted by Chris at 7:33 PM