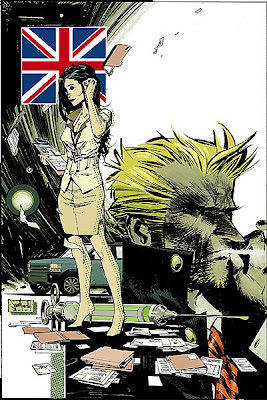 If you’ve read one Hellblazer comic, you’ve read them all. The ‘blazer genre tropes are pretty well worn by this time; so writer Si Spencer just embraces what’s great about the character and rolls with it. As I mentioned when I reviewed the first issue I don’t get why this is being spun out into a mini but artist Sean Murphy’s work is so great that I couldn’t care less. Anyway, Constantine seems to have been possessed by a demon (or demons) and he can pass along this possession like an infection to anyone he meets. Of course normal people don’t deal with being infected by a demon very well and they tend to do lots of horrific and bloody things. I’m enjoying the hell out of the series so far, no pun intended, and I can’t wait to see where it takes me.

In this issue Lex Luthor continues on his quest to seek the truth behind the black power rings from the Blackest Night event. Only Lex’s journey has been put briefly on hold while he comes to grips with the fact that he is, y’know, dead. Death, making a rare cameo outside of Neil Gaiman’s ever popular Sandman series, shows up to wheel, deal and help Lex accept his sudden change in status. This is a fantastic issue. In Paul Cornell’s hands Lex Luthor is still the same ruthless, irredeemable villain he’s always been, only now for some reason he’s a lot more interesting. Cornell manages to explore some of the seldom seen aspects of Luthor’s personality without invalidating who the character is at this core. And it’s always great to see that Gaiman’s Sandman characters continue to play a role in the DCU. If I thought there was any hope in hell Neil would come back to the characters I’d love to see this issue as a trial balloon to gauge reader interest in the franchise.

Avengers vs. Ultron vs. Future Avengers vs. Kang. There can be only one. Bendis’s first story arc on the reincorporated AVENGERS comes to a close. And with all things time travel related it was a great opportunity for the writer to drop some hints about future story arcs. I don’t have too much to quibble with here. The art was pretty and the story and dialogue were engaging. That being said, I’m dropping the title. I’ve always been a DC guy at heart and on top of that my budget can’t really float another 3.99 ongoing. But it was fun while it lasted and I have no issue pointing prospective readers towards the book if they’re looking for a good read.

Wait, is this series over? Because this issue reads suspiciously like a series finale. Being an Avatar release there are always about a hundred pictures in the back of the book, detailing the many variant covers of the company’s upcoming releases. And unfortunately I can’t see a solicitation for issue #22 anywhere. Given that series creator Warren Ellis is supposedly penning a live screen adaption of GRAVEL I find the timing of the title’s cancellation extremely unfortunate. Or perhaps it was always meant to wrap up in this way. Anyway, in this ish Gravel throws down with Bible Jack for control of London’s magic. There’s some magic, some gore, a little of the old ultra-violence and a bit of swearing. Happy Halloween!

Green Arrow fights off an uprising of Blackest Night style super zombies while trying to save the life of an innocent bystander who was injured by the assassin Nix. Typing sentences like that reminds me why I can’t interest my wife in comics. Especially if I were to mention that GA beats the zombies by shooting them with slivers of wood from the God Tree. I enjoy how titles with the Brightest Day banner on them are still touching on Blackest Night plot points six issues later. Too often Big Two events are really just an excuse to mix up the status quo. Once the new status has been achieved the big events are quickly forgotten. I suppose that in the pursuit of new readers this reset button is a necessary evil. But I prefer to think of continuity as a boon and not a hindrance.

If there were a section for most irrelevant comic of the week, you’d be looking at it. DC apparently needed to plug some material into their Superman publishing schedule in order to cover for writer JMS’s ongoing illness. What the reader gets is an unnecessary fill-in issue with Lois reminiscing about the road untaken. Or at least, that was probably the intention. Instead it feels more like 22 pages of Lois whining and complaining about being stuck in Superman’s shadow, which is at completely at odds with her character. The art is flat, feels strangely unfinished and every so often the artist, Leandro Oliveira, throws in a canted angle that sticks out from the page like a chorus line of nuns doing the can-can. If you read just one Superman title this week, well, I hope it isn’t this one.

I forgot to pick up this issue. What can I say, it was a heavy week and it slipped through the cracks.

Only one more issue to go before this title goes back to it’s new, old number. Wait, did I say that right? Anyway, in this issue Peter Parker is attempting to regroup and pick up the pieces of his life after almost dying at the hands of the Chameleon Twins. His relationships with MJ and Gwen are falling apart. And even though he’s be lauded as a hero by the Daily Planet, somehow fighting crime seems to have lost its appeal. This is the first real pause for reflection this title has taken since it was rebooted fifteen issues ago. This is Bendis at his best, portraying complicated, nuanced character relationships with depth and feeling. Unlike so many other heroes in the spandex set, what makes Spider-man one of the greats is how he deals with his life when the mask comes off. Bendis has done a great job here reminding us of the timeless nature of the character.

As an aside, Marvel needs to pack in those absolutely terrible Spider-man\Mazda ads on the back over. I'm all for companies making a buck with cross promotions. I just don't think the serious car buyer is going to be won over by an ad on the back of his or her funny book.

This is how we do it! Unlike his work on SUPERMAN I’m enjoying JMS’s turn on WONDER WOMAN much more. I suspect a lot of that has to do with the fact that essentially Straczynski has been given a clean slate to play with the character. What you’re looking at when you pick up this book is the Ultimitized version of the character and, in my opinion, its really starting to come together. There are just enough familiar elements here to be comfortable to returning readers, but the take is fresh and new enough that new readers don’t feel hemmed in by decades of stifling continuity. In this issue, Wondie throws down with Ultimate Steve Trevor who, without Diana’s influence, has become a horrifically scarred mercenary for hire responsible for the deaths of all the Amazons.