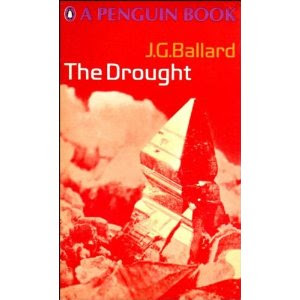 By all rights The Drought

shouldn't be called science fiction. Labeling it as such feels like some marketing intern took the easy way out when asked to categorize the book. Calling it sci-fi means that prospective readers may come into the story brandishing expectations about seeing certain genre elements that will never appear in this book.

The story's hook is that environmental pollutants have built up across the planet and formed a thin skein of chemicals that prevents Earth's water from evaporating. The world's drinkable water is slowly being consumed, leaving behind only oceans of salty death.

Against this apocalyptic setting Dr. Charles Ransom is trying to stay alive in the sleepy town of Mont Royal as the world around him begins to fall apart. When we're first introduced to Ransom he is living on his useless houseboat. His wife has left him for the local police Captain, presumably for the protection he provides her. And, almost everyone is leavign for the coast, where it is rumoured water is more plentiful.

Ransom does a final tour of the town, touching base with with those who have chosen to remain behind. They are an eclectic bunch, mad men and dreamers who are oblivious to the dangers of the water shortages or simply don't care.

Events soon begin to spiral out of control. The various factions of Mont Royal go to war against each other, fueled by their warped ideologies and their fear. Ransom, and a small group of others, are forced to retreat to the coast when the town is set ablaze by the warring inhabitants.
On the coast, life becomes a daily struggle for survival as groups of marauding refugees steal water from each other in an escalating series of conflicts. Ransom quickly finds himself a pariah amongst the lost as his skills as a physician are useless at staving off death and serve only to remind the coastal inhabitants of the hopelessness of their situation.

Its your typical Ballard tale, a protagonist driven to the brink of destruction as social mores around him vanish, revealing the monster that lurks beneath. It's a theme touched on by every Ballard novel I've ever read and he uses it to great effect here.

In THE DROUGHT the apocalypse doesn't happen overnight. It's a long, slow, drawn out process that takes decades to reach its climax. Lovers becomes strangers, neighbours become fanatics and soon humanity is stripped away, leaving behind unfeeling animals who's only desire is their own survival.


THE DROUGHT is a dark, introspective, intense read. And, I'd recommend it to anyone looking for something with a little social relevance to their sci-fi reading.
Posted by Chris at 6:48 AM