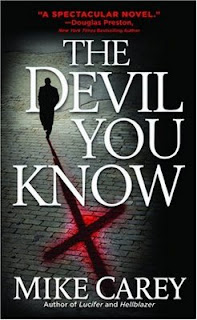 Felix Castor is a freelance exorcist, and London is his stamping ground. It may seem like a good ghostbuster can charge what he likes and enjoy a hell of a lifestyle--but there's a risk: Sooner or later he's going to take on a spirit that's too strong for him. While trying to back out of this ill-conceived career, Castor accepts a seemingly simple ghost-hunting case at a museum in the shadowy heart of London--just to pay the bills, you understand. But what should have been a perfectly straightforward exorcism is rapidly turning into the Who Can Kill Castor First Show, with demons and ghosts all keen to claim the big prize. That's OK: Castor knows how to deal with the dead. It's the living who piss him off...


Mike Carey is one of those authors that I kept hearing about in the same breaths as Jim Butcher, Carrie Vaughn, and Patricia Briggs as far as how his urban fantasy series holds up. That is a sort of praise as it is, and in this case is certainly not unfounded. I know of the man from his comic book work (Hellblazer, X-Men and the fantastic Unwritten), and only VIA my message board cohorts over at the Malazan boards (Abyss, I am looking at you sir. ;) did I have any idea the man wrote full novels. And so I it was that I struggled to find a copy of Devil You Know

in Toronto. Needless to say the subsequent novels in the series were easy to find in comparison to the first one. After much searching, I finally found the first book, and oddly enough it was catalogued away from the other books in the series all by its lonesome in the regular-ass fiction section (What? That’s a section! For real). Strange, but then does that say something about the authors’ skill that someone thought his first novel belonged in the literature section.

So, Felix Castor is an exorcist, but what is nice is that he is not an exorcist in the traditional William Peter Blatty “I need a young priest, and an old priest” manner. Rather Carey’s hero is actually an atheist who just happens to be in tune (pun! Read the book!) and able to interact with the deceased or demonic. In other words he sees ghosts (Go ahead Shamalyan...sue me!). Thankfully the rest of the world is aware of them as well, to some extent, depending on the person. Which is a nice change from the usual “the rest of world doesn’t know and thinks me crazy!” plot. In point of fact though this doesn’t protect our hero from skeptics, as there are those that aren’t in tune enough to see the ghosts, therefore they think it’s bunk of course.

Felix is great. He’s a smartass, and every bit as sardonic and timely with his wit as Harry Dresden, or Spiderman, but where he nicely differs is how dark he can be. He has a past, one we see glimpses of and it isn’t a nice one. It’s one that he doesn’t like to face himself. We get the feeling from the supporting cast, that he is too hard on himself, but is he? Speaking of, Pen is a fantastic foil/unattainable love interest. She is mysterious about what she does, and how she is, and unapologetic about it. There is a scene where she is carving rosary beads down smaller, and Castor asks why and her only reply is “They are too big.” Priceless.

The villains are as bad as you wish them to be, even in Castor's decidedly grey world, and that makes for some nice interaction with our hero and make him seem a little more magnanimous than he likely is. I like the paint Carey uses to shade his characters though. It always feels right, and never garish. There is no lacking for an evil quotient in this story, Russian mobsters, Succubi, Demons, Ghosts and other assorted antagonists. Who isn't gunning for Felix?

The ghost story itself is interesting. Nothing entirely new mind you, but quite riveting in itself and a clever red herring-ed story all told. I’d put the story on par with Butcher's second Dresden book Fool Moon, as it’s good, but not great...yet. For you see what jumps out here is the characters. Pen obviously, Castor's holy man brother Matthew, and then there is Castor’s mistake in the form of Rafi, an old friend who he got too interested in the occult, and who took it upon himself to open his soul up to the dead.  As a result he got himself possessed and while Felix foolishly tries to save him he ends up intertwined with a nasty demon by the name of Asmodeus, and that’s something Castor won’t allow himself to forget. Castor himself leaps off the page with character, and I find myself endlessly intrigued by him, and personally I can’t wait to read more.

What Carey does great other than his characters is the creep factor. He does it so deftly that you don’t even see what’s creeping up on you and then all of the sudden he freaks you right out. This book certainly gave me some goosebumps along the way. Well-written would be an understatement. Carey is good enough to swing with the heavy hitters like Butcher. Easily.

My Christmas wish? Felix Castor and Harry Dresden unite on a case. I think my head would explode from the awesome!
Posted by GunMetalBlue at 6:41 PM