Review: Doctor Who - The Name Of The Doctor 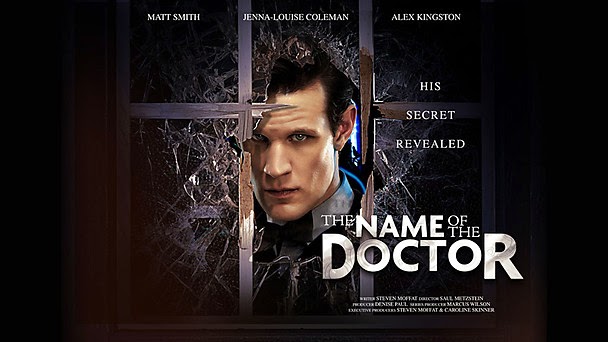 Let’s talk about the DOCTOR WHO Series 7 finale shall we?

No, I’ve not been reviewing anything from the strangely titled Series 7b (THE BELLS OF ST. JOHN to NIGHTMARE IN SILVER), and that’s really (sadly) come down to an enjoyment level. When I used to watch RTD’s DW I was EXCITED to post about it, to talk about it with friends, and gush over what I liked. When Moffat took over in Series 5, I was excited-ish throughout (nothing reaching the levels of my RTD-era love, but excited enough)…My feelings on the entirety of Series 6 are pretty well known (Read: I loathed it more than any whole series since DW came back in 2005). Series 7 has been “meh”. The only truly standout eps for me were Neil Cross’ HIDE, and the Xmas special THE SNOWMEN…everything else could be easily swept under my WHO-rug and forgotten about. It should, therefore, speak volumes that the ONLY thing that’s been able to rouse me out of my review-malaise concerning this show is to pontificate on what I felt was a relatively disjointed and ultimately pointless Finale for Series 7.

THE NAME OF THE DOCTOR, written by showrunner Steven Moffat (a man whom Chris and I used to look upon with wonder for his TV writing), is not a mess persay (at least not like 2011’s A GOOD MAN GOES TO WAR), but it’s a straightforward thought essay on the Doctor.

For the 3rd Series finale in a row.

History Check: Series 5 – The Doctor must solve the mystery of the Pandorica (a box designed by his enemies to keep him from his future), and stop the TARDIS from exploding in the future.

Series 6: The Doctor has gotten to big for his britches, and his very “name” has caused an entire religion to be crafted around capturing him, and killing him…to keep him from his future. This time we get the mention of that future in Trenzalore, where the question cannot be asked “Doctor Who?”

Series 7: We go to Trenzalore, and proceed to go through 45-odd minutes of that journey and what happens there.

The issue? That for the third series running the show isn’t about the Doctor saving a planet, or people, or the universe…it’s instead all about the Doctor. Hell, it’s not even really about his companions.

So we go to Trezalore. Does the “name” of the Doctor get said? Yep. But like all Moffat’s “This will happen, and it will change the Doctor forever!” proclamations…it’s all bullshit, a fake out. The name gets said, by River Song, off-screen. And there is no clever story (as was eluded by David Tennant in the Library when he said to River “there was only one time he COULD tell someone his name”) associated with her knowing of it. She literally found out “Because she badgered him about it”.

And that’s just for starters.

So, “name” thing aside what happens on Trenzalore? Well, it’s a battlefield. “Sweet!” you say “Tell me more!” Err…well nope. It’s an old battlefield, and is “supposedly” where the Doctor died. His tomb is his TARDIS which is “leaking” it’s bigger onto the outside. So his tomb is a giant TARDIS. Cool. What’s inside? Well this kind of Swirly Light Tree thingie…and it’s basically the remnants of the Time Lord…a map of his life through time leftover as some kind of echo (I guess?).

Enter our villain. The Great Intelligence (a creature from another universe trying to get into ours VIA proxies) in the form of THE SNOWMEN’s Doctor Simeon and his Whispermen (beings that ominously whisper, and who’s powers are the ability to become incorporeal enough to squeeze your heart so you die) has shown up at the Doctor’s Tomb, and wish entrance, and after threatening the Doctor by saying he’ll kill his friends if he doesn’t speak his name and open the door to his tomb. River helps him avoid this, and everyone trundles inside where they find the light tree thingie. Then the villain does the DW Villain equivalent of a filibuster and tells everyone there his plan is to go into the Doctor’s Light Tree and screw up his every success throughout his timeline and thus undo all he has done. This would be really interesting if he had:

A) Not SPELLED OUT his plan to his enemies in the room, like a hackneyed Bond villain.

C) …seconds after he goes into it, Clara decides to sacrifice herself and follow him in to “correct” all that he screws up. Negating his entire (stupid) plan in seconds.

I’m serious. The Great Intelligence, a villain whom the Second Doctor fought, and who has been tipped as the “big bad” since the Christmas episode and has been pretty much behind all the stuff that’s occurred since then…the creature that you want to see a showdown with…spells out his plan and has it foiled in less time than it would take a Dalek to say “exterminate”. The Whispermen (his lackeys on this plane) had more teeth than he did.

Okay, now let’s leave aside the silly and toothless villain. Let’s deal with Clara’s reveal. It turns out that because she chases The G.I. into the Light Tree she essentially “dies” and “scatters herself” across the Doctor’s Timeline, which is why he keeps meeting her and why she keeps dying and seemingly is resurrected in different times and places. Cool. I can totally buy that, and it’s MUCH less messy than any other Moffat-ism “timey-wimey” thing he’s chucked at us in recent seasons. If it weren’t for the idiocy of the villains it would be a very elegant solution to the “impossible girl” that actually echoes Rose and Bad Wolf.

“So what’s the problem then?” you ask.

Well, it’s in the emotional resonance of her sacrifice. She literally says she will die to save the Doctor from this fate. River actually tells her that she will cease to exist and what is left will be scattered pieces across time saving the Doctor…that the person she is, will no longer be.

Okay great. Gotcha. Poignant, and even though I’m not as emotionally invested in her as I was Rose and Donna, I’m quite fine with that. But the Doctor almost immediately goes into his own timeline (paradox much? But nevermind) to rescue her. He actually breaks the rules of the show…rules which (for example) disallowed two Amy’s, one younger and one older, into the TARDIS at the same time…an arguably WAY lesser paradox than crossing your OWN timeline…to save the girl who just had an emotional scene “rescuing” him. So we decide to steal ANY emotion I had for the scene by reversing it almost right away. That such things are happening on DOCTOR WHO is baffling.

I mean how do you even associate this Moffat-written moment with stuff like “Everybody Lives” from THE DOCTOR DANCES, or Sally Sparrow saying goodbye to a dying old man who moments before was young and hitting on her at the end of BLINK, or even the tear-jerking letter that Madame De Pompador left for Ten in THE GIRL IN THE FIREPLACE? How? The answer is that you can’t. They don’t even exist in the same universe.

Refer to my old post: Steven Moffat CAN be a brilliant writer…when someone else is in control…but when he’s in control of the show as a whole his writing becomes something unrecognizable.

Lastly we have to talk about John Hurt.

So at the tail end of the ep, when The Doctor goes into his own timeline to rescue Clara from her rescue (don’t get me started on why this doesn’t UN-DO her rescue…) and there are various incarnation of the Doctor walking by her…we see the back of an unrecognizable man staring out into the rain…and he is revealed (quite brashly in text on screen…cause apparently we are all dumb and need it spelled out?) as “The Doctor”…and Eleven says that he’s not really allowed to have that name cause of “what he did.” And Hurt’s version says “I only did what I had to do” Speculate as you will. I’m cool with Hurt playing some lost or evil version of the Doctor’s past (even if it renumbers the Doctors) if only because I’m sure whatever it is, won’t stick. Whatever happens with the character in the 50th Anniversary will be timey-wimey’d out of existence, and things will settle back to the status quo. As far as the reveal is concerned, I like that he was in it, to link the finale up with the 50th…but I REALLY could have done without the big, bolded text on screen. It’s almost like Moffat and Co. were like “See, look what we did! Ain’t we tricksy? What’s going on?! You must watch to find out!”…when in my mind, just having Hurt turn around and deliver his line ominously with no reveal about “what/who” exactly he is and running the credits would have been MUCH better as a cliffhanger-y moment. It’s typical of Moffat’s “tell don’t show” approach to WHO…which is the opposite of good storytelling.

…it was always some visual cue, and that’s it. Imagine if RTD had put text on the screen saying “There is a BRIDE in the TARDIS?! What the?!” or “The Hull of the TITANIC? What has the Doctor gotten himself into?!”

But no, instead we get the equivalent of Moffat telling us that our attention spans are SO short that he feels the need to type out on the screen what we are seeing.

Did I like the episode in the end? Yeah, the opening nods to past Doctor’s and the like was fun, if short. The Clara reveal appeased me…if making me realize that for whatever reason Moffat needs to make his companions always be a “mystery” for the Doctor to solve…instead of just letting them be…you know, people. How can Clara grow organically as a character if all we (and the Doctor) are doing is trying to “figure her out” from ep to ep. Sad really. I miss Donna…the temp from Chiswick, and Wilf, her dreamer, stargazing grandpa. Seriously.

I liked it, and it’s SCADS better than last years ridiculous finale…but it’s not remotely close to Series 5 THE PANDORICA OPENS / THE BIG BANG, and isn’t even in the same ballpark as RTD-era finale’s like DOOMSDAY or THE LAST OF THE TIMELORDS.

Lacking doesn’t cover it, and I’m more inclined to talk about what didn’t work for me, if only because what DID work for me in the episode is very little.

And that all makes me sad.