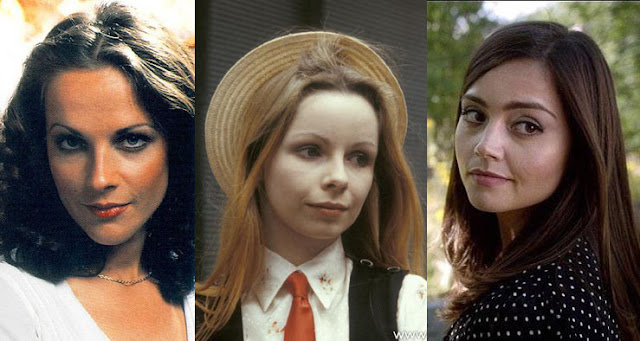 Been a while. What with these sporadic mid-series breaks in the show (don’t get me started), DOCTOR WHO news has been slow to leak out. However, we have had two; count ‘em, two episodes which feature (versions) of the new companion Clara Oswald (played exquisitely by Jenna Louise-Coleman). The first of which was in the Series 7 opener ASYLUM OF THE DALEKS, in which she was the disembodied consciousness of someone who was once called Oswin Oswald (whom had once worked aboard a starship) and had since been mutated and turned into a Dalek…but had no idea what she is and had been placed in the Asylum’s (by presumably the Dalek high Command) “Intensive Care” unit, where the Daleks who survived great battles reside, weaponless. This is where Oswin is, locked in a room on her own. This will be important later in the post. Stay tuned.

The next time we see her is in the most recent Christmas Special THE SNOWMEN. She is now Clara Oswald, Victorian barmaid and secret governess to a wealthy family’s children. With the help of Silurian ‘Sherlock Holmes’ Madame Vastra, her wife Jenny, and the Sontaran Nursemaid (now Butler) Strax, the Doctor is in hiding, refusing to save the universe any more. Then Clara comes along and mucks things up by getting him involved. She’s quick, she’s clever and nine times out of ten in this episode she is smarter than the Doctor, or at least on par with him mentally. They spar back and forth and it all... sounds very familiar.

During his 4th Incarnation (Tom Baker), The Doctor spends an entire series on a quest for the various pieces to the Key To Time. On this quest (given him by the mysterious White Guardian) he is joined by another Time Lord, one fresh out of the Academy on Gallifrey. Namely, Romanadvoratrelundar (Mary Tamm), or Romana for short (though she prefers Fred). At less than 100 years old she is still a raw recruit, but being a Time Lord she can spar with the Doctor on his level. In fact he’s initially very unsettled by how much she knows. She’s a strong character, and one I really enjoy watching. Now, after the various pieces of the Key To Time are found and then re-dispersed (I’m not telling you why, go watch THE KEY TO TIME), Romana regenerates into Romana II (Lalla Ward). Romana II stays on board with the 4th Doctor for a long time (nearly until his regeneration into the 5th), but when she finally takes her leave, he gives her K-9 and off she goes.

Now that’s where vaguely the TV story of Romana ends. Thankfully the books and Audio drama’s continued her story (most especially in the political drama series from BIG FINISH called GALLIFREY). It turns out that some years after leaving the Doctor, Romana II returned to Gallifrey and ends up as its President. She and K-9 have to jump through a myriad of political hoops and nefarious plans to unseat her for many years.

And that is where some Dark Times occur during which we know very little. We only know that at some point down the line the Lord President becomes Rassilon, and the Time Lords engage in a large scale war across many systems with their most hated enemies the Daleks, in the Last Great Time War. The Doctor (in his Eighth incarnation at this point) sees many things that unsettle him about his own race. Having lived through them being stagnant, unbending, and basically arrogant…he then sees them descending further and further into madness and violence. In the final days of the Time War the Doctor time-locks it so that it doesn’t tear reality itself apart and dooms his own race and planet to eternal torment.

But what happened to Madame President Romana II? Well the books tell us that she regenerated into a third incarnation prior to this, but they never tell us how she lost the presidency, nor what happed to her during the Time War. We know that a Rival Time Lord tried to unseat her and kill her after the Second Great War In Heaven…but Eight stopped this.

The Crackpot theory part is about what I think COULD have happened. What if Romana III objected to the Last Great Time War (having survived the Second War In Heaven, and assassination attempts), and the CIA (the Gallifreyan Celestian Intervention Agency) found a way to unseat her and put Rassilon on the seat. Might she have been imprisoned for her views? What if while in prison (and in the still current locked state of the Time War) she found a way to project herself outwards. Used regeneration energy to get through the Time Lock and offworld into…a passing Starliner perhaps? What if a human aboard that ship was converted into a Time Lord, and the official 4th incarnation of Romana allowing her to escape? Her old body imprisoned on Gallifrey would die, but she would go on in a stolen human body effectively regenerated into a Time Lord. Then travelling back through time and basically BEING these other versions of her new self, on a skipping loop that repeats when she dies. She DID have a TARDIS when we last saw her, so it could be disguised as something very small. What if Oswin Oswald was that human? It would explain both her variations so far (neither of which is the main one we will be introduced to in THE BELLS OF ST. JOHNS on March 30th) being so terribly clever (smart enough to spar with a genius Time Lord who is over a 1000 years old), and seemingly un-phased by the alien nature of the plight of the Doctor against the Snowmen.

I add to this a few nuggets from things we hear in the trailer for the second half of Series 7.

1. She is referred to as the girl twice dead. So she is somehow the same person over and over again even after dying. Sounds like regeneration but the switch is stuck and instead of changing to a DIFFERENT body she’s being given new same ones instead. This could be explained by the fact that Romana needed to steal a human body.

2. The Doctor clearly says, “She’s not possible.” To me this could be a big pointer at the fact that it’s Romana IV…since her being out of the Time War would seem next to impossible. But where Rassilon failed at unlocking the Time War as a whole…perhaps One Time Lord could survive. After all, Dalek Caan rescued Davros from the Crucible and brought him across the Lock barrier. One could interpret the Doctor’s statement as simply being that she’s died twice, how can she exist a third time in the same “look”…but that’s a little too simple for DW in my eyes.

A variation on this theory (which I've seen around), with the same results is based on something talked about in THE SNOWMEN. A specific story about being "born behind Big Ben" and how this accounts for her impeccable sense of time. What if, Romana III wasn't imprisoned, but rather escaped BEFORE the Last Great Time War...but needed to hide. Enter the Chameleon Arch (the Fob Watch) that Time Lords use to hide their identities disguising themselves as human. What if Big Ben is her Fob Watch? And not only that, what happens when a Time Lord disguised as a human VIA a Chameleon Arch dies? Do they regenerate normally? Or is it possible they continue to regenerate but into the same form over and over again since that's the form they took when disguised? She keeps telling the Doctor to "Run" and to "Remember". We know from John Smith and the Master's use of the Fob Watch that little bits of their time lord personality leak out form time to time when disguised. This would explain her smarts, her ease with the decidedly alien events, her seeking out of the Doctor, and her treating him like an old friend. So this is another way that Romana could have survived and become Clara.

So that’s my theory. Clara is not only a Time Lord, but she is the 4th incarnation of the prior Lady President of Gallifrey, whom has travelled with the Doctor before. She is likely some 700 years of age and escaped the Time War. What a boon that would be going into the 50th Anniversary events storywise. The avenues and story aspects that could lead to (including multiple Doctor appearances) begin to boggle. But to be quite honest…I’d just like to see Romana make an appearance in NuWho. She is just such a great character with a lot of depth, and I think she deserves to come back.
Posted by GunMetalBlue at 6:13 AM