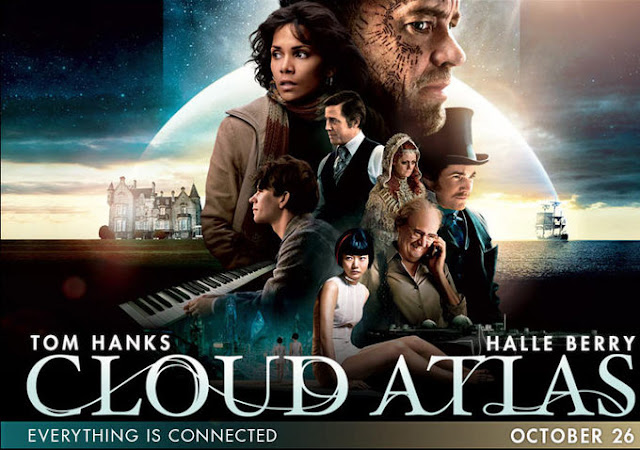 It's really tough to go into a film adapted from a book you love and hope they do it justice. Especially when that book is something as difficult to translate as David Mitchell's CLOUD ATLAS. Even after I saw the extended first look at the Wachowski's and Tom Tykwer's film I was...still wary.

Well, I'm here to tell you that they pulled it off.

CLOUD ATLAS the film is probably as close as I could imagine anyone coming to translating the cross-connected, existential, nesting doll that is the novel. Attention was paid to how the film would need to be told in a slightly different fashion to the book, how the characters are connected, and simply how the narrative could go from beginning, to middle, to end without losing the audience.

Firstly, having the core cast (Tom Hanks, Halle Berry , Jim Broadbent, Hugo Weaving , Jim Sturgess, Doona Bae, Ben Whishaw, James D'Arcy, Zhou Xun, Keith David, David Gyasi, with Susan Sarandon , and Hugh Grant) play multiple roles in each time period/story (in some cases in very heavy makeup...Hugo Weaving as a hard-as-nails female nurse comes to mind) was a stroke of genius. Basically showing the connection throughout the stories (other than the comet shaped birthmark) would have been tough otherwise, but this adds a level of ease to the audience allowing them to accept the connections more readily. Speaking of the core cast, the acting pretty much across the board was stellar, with all parties involved bringing their A game.

The screenplay cleverly keeps the beginning and the end pretty much intact, while splitting up the middle portions with very timely and exacting editing. Spending time dropping between all 6 of the narratives in sections of hyper-cut scenes helps establish the audience in all 6 time periods. As a fan of the book I had no trouble following along, but it's good to know that other than getting into the dialogue in the far future "Sloosha's Crossing" section which can be tough even when you've read the book, the film still allows the audience into its criss-crossing pathways, and I think in that latter half you would have zero trouble following along.

The score is absolutely GORGEOUS. I was seriously hearing it in my head afterwards when I was in line for my next film. It resonates in and out at the best moments and the Cloud Atlas Sextet (the piece the film is named after) is quite aptly rendered into the score.

It's really hard to get my feeling out about this screening other than simply saying "they pulled it off". It is a sprawling, epic spectacle that is both quiet and understated and brashly ambitious in equal measure. It is going to be a film that as long as you go in with an open mind and allow it to let you in, you will certainly enjoy. It's entertainment value is high simply by virtue of the tale and characters, but it is the performances, the editing and the ebb and flow that will keep your butt in the seat.

I can't quite wait to see it again to drink in more of it, as there is a lot crammed into 3 hours (that didn't feel like 3 hours) but it never felt overstuffed. It's more what I would call a mosaic where the connecting lines are as important as the pieces themselves. Like the book it is a film about society, war, love, family, faith, pestilence, healing, imprisonment, freedom and escape. But it is mostly about beginnings. And that's what I take away from the film. A beginning, and a wonderful one at that.
Posted by GunMetalBlue at 4:20 PM