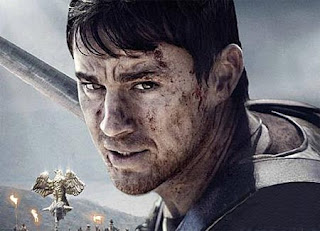 Given my deep and endless aversion to Charming Potato I went into THE EAGLE with the lowest of expectations. Damned if the film didn’t hurdle them with ease.
It’s a weird kinda film with a buddy-cop-polar-opposites thread* woven into a swords and sandals epic. THE EAGLE makes an earnest attempt to strive for some sort of historical accuracy then falls all over itself in the execution.
But my biggest complaint is that it’s so very American. Seriously, I don’t need my Roman Senators talking like they’re the small town sheriff in a low budget remake of SMOKEY AND THE BANDIT. If you’re not going to talk with some sort of Roman accent** then can you at least make an effort to construct your sentences in a way that doesn’t sound like grade schooler learning about nouns for the first time.
Come on! At least try to get flowery and pretentious on me every now and again, pretend that powerful dialogue is something to be embraced not avoided.
Anyway, it didn’t suck. At all. No matter how much I wanted it too. So that’s one for you Charming.


*He’s a cop! He’s a slave! Together they’ll fight crime and find…THE EAGLE!
**No, I don’t know what a Roman accent sounds like either, but a misspent youth in front of a television set tells me it sounds very British.