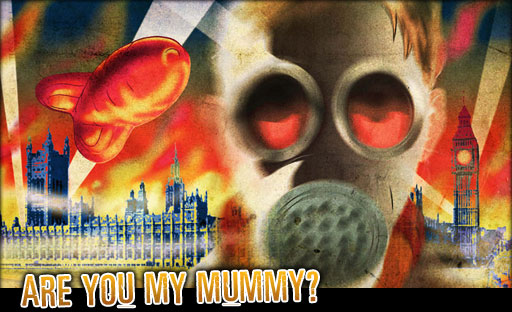 The first time current showrunner Steven Moffat applied his writerly skills to the DOCTOR WHO universe, it was during Series 1 for the two part story of THE EMPTY CHILD and THE DOCTOR DANCES.  It was the first time any of us knew that with the right idea, Moffat’s tales could blow the doors clean off DW crafting not only memorable, but award-winning episodes! This was a trend that would continue as the Series went on, but for now let’s talk about this first one.

The Doctor and Rose follow the distress beacon of an alien craft in the TARDIS. As they land in London in the vicinity of the crash site, the Doctor informs Rose that although they followed the ship closely the TARDIS has dropped them more than a month after the alien ship had crashed. They are also both completely unaware what the date is. It is quickly apparent that it is the past, but more specifically that it is WWII-era during the London Blitz. The Doctor goes off in search of someone to help locate the fallen ship, while Rose sees a young boy in a gas mask calling out for his mother and she goes to investigate. Rose finds herself in short order hanging from a dirigible by rope, and The Doctor finds the TARDIS phone (a device that isn’t connected to anything) ringing. Over the course of the first episode we meet the monster of the episode, which it turns out, is the Gas Mask child (and anyone he touched, who then become Gas Masked as well and are forever looking for their mothers).  We also meet (for the first, but certainly not last time) Captain Jack Harkness. A far cry from his much more altruistic hero future, here he is shown as a con-man/trickster who actually caused the alien ship to crash in the hopes to swindle the Doctor for it. 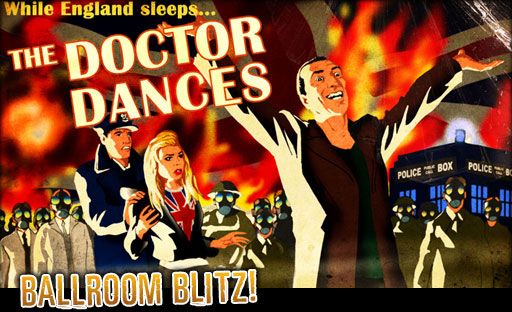 I can’t help but love these two episodes. We get a villain who is not a villain, we get another villain who is really a victim, we get the rigors of war, we get creepy dialogue (“Are you my mummy?”), we get Rose in a flirtatious relationship with someone other than the Doctor, and lastly we get the Doctor expressing something we had yet to really see from him…happiness. In less than two hours, Moffat has crafted a stunning microcosm of all the things that make the re-launched DOCTOR WHO series so utterly watchable. In fact of all the episodes that my co-watchers (read: first time watchers) have seen, this two-parter has resonated the loudest. I was told “Wow, those were REALLY good!” by said co-watchers. And that’s the point I’m making. Any time I try to get people to watch DW Series 1, I will immediately mention these two episodes (and FATHER’S DAY) to them, because although there are other very good episodes in Series 1, these ones have EVERYTHING and will totally hook the new viewer.

Rose has a nice little romp in this one, a lot of which she is on her own for. This is actually one of the first times in the Series that she is left to her own devices (unwatched over) by the Doctor. There are hints of the strength that she will begin to show as a character. The first peeks of an independent Companion of the Doctor, as opposed to the unknowing tagalong she spends a few episodes being when we began this journey when she is still unsure. I mean, she’s not yet confronting and bewildering Daleks or Cybermen, but at least she starts on the path. That’s a big deal due to where the things go by the end of the Series and the Bad Wolf-Arc.

Harkness is represented well, and you even buy into his transformation over the course of the 2 eps from con-man to upstanding hero. A change wrought almost entirely by having met and pissed off the Doctor. I love that bit actually, since it showcases how even just meeting him and hearing the way he sees things can change a person. That’s a huge weight to bear around, and the Doctor does it like it’s  a feather.

This is one of the Doctor’s finest hours. The ending of THE DOCTOR DANCES is probably one of the most iconic moments of Nu-Who and has dialogue that is repeated by fans. You really can’t help but feel the infectious nature of that when you watch it, and I feel that is something that Moffat usually brings to his episodes. It is certainly one of the reasons that he has won so many Hugo Awards for these stories.

I love these through and through, and even though I have seen them multiple times, I never get bored of them.

NEXT TIME: An old, previously thought defeated (flatulent) enemy returns in BOOM TOWN.
Posted by GunMetalBlue at 11:00 AM