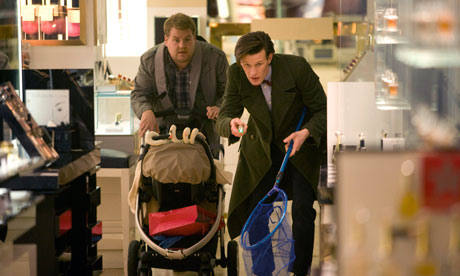 CLOSING TIME is the penultimate episode of the current Series of DOCTOR WHO, and it not only sees the return of James Corden (as Craig Owens from last year’s THE LODGER), but also the Cybermen (and their vicious spy drones the Cybermats).

Before we get started on the review, a little plot. We are meant to assume that the Doctor is 200 years older since THE GOD COMPLEX ending. He's had all his adventures with River, Jim the Fish et al. We are meant to assume that after last week’s episode, the Doctor dropped off Amy and Rory so they can live their lives without fear of danger, then he went off to have all those adventures on his own (that we saw in the opening episode, Laurel & Hardy, Nazi’s, nude paintings ect.). This week sees him returning after all that (but prior to going off to his death at Lake Silencio) to visit old friend Craig Owens. Craig is now a new dad taking care of his son Alfie by himself to give wife Sofie a weekend off. The Doctor had only popped in to say hello, but of course notices things wrong in town. this all quickly leads them both to discover Cybermen are kidnapping people from the shops in town which leads the Doctor to get a job in a shop to find out why.

I enjoyed last year’s Pre-finale episode THE LODGER and Gareth Roberts who wrote both episodes does a fairly decent job here as well. I think the episode adventure itself is rather by-the-numbers though and the Cybermen here are far less menacing (which has a kind of purpose). That's not what it about though, so I wasn't too concerned about that bit. What really DOES shine through though is the dialogue and the interpersonal relationships here. While giving a fantastic set of notes about fatherhood and believing in one’s self, there are also a few moments of the Doctor allowing himself to be entirely introspective and VIA chatting with Alfie (he can speak baby) we get a lot of insight into his psyche. I actually think that is the main reason this episode exists. I think it’s kind of like an extended prologue to next week’s  finale to Series 6. This is his last hurrah before he goes off to meet his inevitables in a spacesuit. It seems as if Roberts was aware of this, as the episode is light-hearted enough to not heavily weigh us down before what will probably be a rather bleak finale.

Amy and Rory pop up very briefly midway through and the episode is capped off with a moment with Dr. River Song (the precursor to the Professor Song that will eventually meet David Tennant’s Doctor in the Library), Madame Kovarian and the Silents.

All in all quite well done if you view it for what it is, less a standalone episode as it is a prologue to the finale. It wins for the dialogue, the Doctor's monologue, the sweetness factor, the light-hearted nature and comedy throughout. This is also one of only a very few episodes this Series that have shown the Doctor he DOESN'T always screw up his companions or turn them into weapons. In fact Craig is a glowing beacon that shows the Doctor can do good things for people, VERY good things.

Oh and a NOTE about next weeks episode and Madame Kovarian. The metal eyepatch she wears, and the one I've seen everyone sporting in the next episode's promo pics...and this should have been BLINDINGLY obvious to me since she first showed up, but just wasn't....the eyepatch is to negate the effects of the Silent's powers. Duh! Haha!
Posted by GunMetalBlue at 12:09 PM