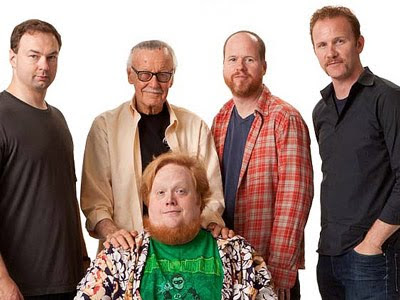 COMIC-CON EPISODE FOUR: A FAN’S HOPE follows around a handful comic book devotees at the 2010 San Diego Comic Con. There’s the uber-fan who hopes to break into the biz, the dedicated military man with dreams of penciling for Marvel, the hardcore toy collector who’s only goal this year is to get the Con exclusive 18” Galactus figure, the young couple who found love at last years Con, a group of dedicated cosplayers and Chuck Rozanski, the owner of Mile High Comics, the largest comic retailer in the United States, who is having significant problems with his short term cash flow.

Interspersed between these personal stories are little vignettes from some of the biggest names in comic book and nerd culture, including Joss Whedon, Grant Morrison, Eli Roth, Guillermo del Toro, Kevin Smith and Stan Lee, providing history and context about the annual marketing extravaganza that SDCC has become.

Directed by Morgan Spurlock, of SUPER SIZE ME fame, COMIC CON is a fairly by the numbers documentary. Bucking the trend of recent high profile documentaries who use their celebrity directors as a de facto ring leader and showman, gleefully interacting with their subject matter, Spurlock has chosen to remain entirely absent from this film.

The end result is a documentary that seems strangely devoid of a distinctive personality and tone, which is odd considering the film’s rich subject matter. COMIC-CON just sort of happens and there’s very little about it that jumps up and grabs watchers by the throat. Clocking in at just under an hour and a half the film feels oddly truncated, unfinished and mostly superficial. We’re shown SDCC in all its glitz and glamour, treated to a little bit of history on how the show has changed from a comics focused love in to a multimedia spanning entertainment juggernaut. Despite that, I didn’t really feel like Spurlock captured the organized chaos of the event. He very much kept his camera trained on a few privileged individuals and then just left it there, eschewing some of the other rich offerings SDCC has to offer.

Rather than choosing to focus on his subjects only during the four days of SDCC I would have liked to see the documentary delve a little deeper into the lives of these fans. Who are they when they’re not losing themselves in the cheerful chaos of the Con, how do they balance their obvious nerd credentials with their everyday lives? Attending the Con should be the climax of the film, not simply the backdrop to a series of stories who deserve more thoughtful context and analysis then a perfunctory rundown of their particular nerd fetish.

Despite my less than glowing review of the film, COMIC-CON managed to leave its mark on me nonetheless. A dedicated fanboy myself I harbour my own dreams of someday making it into the rarefied world of comics publishing. As a result the struggles of the film’s two aspiring artists to break into comics struck a particular empathetic chord with me. While the doc itself might be stubbornly middle-of-the-road in terms of quality, it treats its subject matter with respect and never condescends to its audience by poking fun of the fans.

If I’m disappointed with this film it’s only because I’m passionate about the material and can see all the many avenues it chose to leave unexplored.