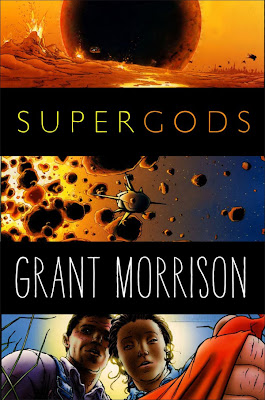 I credit two people with reviving my flagging interest in comic books in the late 1990s. The first was Stuart Immonen, whose beautiful pencil work on DC’s Superbooks was unlike anything I’d ever seen in my four colour funnies.

The other was Scottish author Grant Morrison, a seemingly semi-deranged and drug addled writer, whose unconventional style helped me to get over the hump when it came to looking at comic books as something more than just childish pursuits.

Of the two it’s really only Grant I read now, having failed to follow Stuart in his jump over to Marvel. But the man who has written WE3, THE INVISIBLES, THE FILTH, ANIMAL MAN and so many other seminal works of comic bookery has never failed to challenge my expectations of what the medium is capable of delivering.

SUPERGODS is one part historical overview of modern comic books, one part analysis and one part autobiography.

Starting with a detailed breakdown of ACTION COMICS #1 and an exploration of Superman, perhaps the most recognizable character in comic books, Morrison brings you through modern comics early history right to the present day, interjecting his own interactions with the medium and how they’ve come to influence his work.

Morrison’s insight into some of these characters is as unique as his writing. Incredibly cerebral, his analysis can sometimes border on the incomprehensible as he vanishes down literary rabbit holes in search of truth and understanding.

When he’s not examining comic book characters Morrison is delving into the varied cast of creators who’ve populated the field in recent years and the impact they’ve had on shaping the industry. It’s fascinating to get Morrison’s take on some of these individuals. While I had a passing knowledge of the contributions of most of them there was definitely one or two who I’d previously discounted.

And that’s what I love so much about this book, how it adds new layers and new interpretations to old material, including Morrison’s own work. Themes and ideas previously discussed over beer with friends are now explicitly outlined on these pages. Morrison’s interweave of personal experience and creative genius are laid bare for fans of the author and his work to sort through and analyze.

Suddenly I found myself seeing Morrison’s output in a new light. And, on more than one occasion I found myself putting SUPERGODS aside in order to dive into my longboxes and pick up something he’d done earlier and reread it with fresh eyes.

(Which was a really illuminating experience until I got caught reading THE INVISIBLES again. Rereading that epic is usually enough to cause my brain to retreat screaming in terror. I have a sneaking suspicion that THE INVISIBLES only really makes absolute sense if you read it while high.)

Finishing SUPERGODS gave me the sort of mini creative buzz that I only get when I find myself reading\watching something truly spectacular. The excitement and energy Morrison holds for comic books and creativity in general seemed to literally bleed through the page and infect me.

Whether you like Grant Morrison’s writing style or not, and believe me the man is certainly an acquired taste, I think you’d be hard pressed to deny that he’s made his mark on the landscape. He’s always pushing the boundaries of the medium and I’d rather he continue to do that and fail than partake in the by the numbers mediocrity that seems to infect the world of mainstream comics publishing.

Reading SUPERGODS I got the sense that as Morrison has aged his goals and aims for comic books has changed somewhat. Initially, as a young angry punk, it seems like he was all about tearing down and destroying the traditional and stuffy clichés of comic books. But now that he’s gotten a little older its not about tearing down, its about creating and building up.

And I find that exciting.