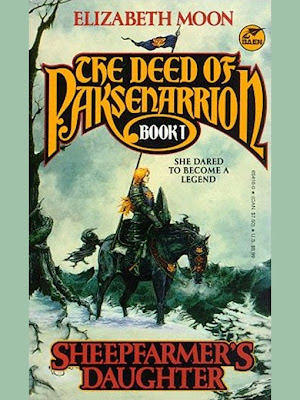 I read to be entertained and if you can’t entertain me even a little bit after 430-odd pages then the chances anything you do down the line impressing me are totally beside the point.

Elizabeth Moon (controversy about her personal notions aside) is an author I had never read but saw her name on the spines of many books in the fantasy & sci-fi sections. I heard a few endorsements for her work, mostly her early stuff from the late 1980’s and more specifically her Deed Of Paksenarrion series.

Well, I popped into the store last Thursday with the knowledge I’d be going away to a cottage for the weekend, and could use a new book to dive into. Some classic trope-ish fantasy with a military edge. Considering my enjoyment of Cook and Erikson, seems like this would be right up my alley. I grabbed Moon’s first book in that series SHEEPFARMER’S DAUGHTER and off I went.

Well, the book started out interestingly enough with a prelude that is actually a post-script. A soldier of some kind is seen delivering the lead character (Paksenarrion’s) sword home to her father many years after she’d gone off to join the military, where there were fables about her bravery and her deed was considered legendary. Fascinating!

So we then jump back to the beginning with Paks leaving home against her fathers wishes to join up and become a soldier in a local Duke’s army. There is a spate of pages about basic training and while interesting, it is all kind of by-the-numbers so I kept thinking, this is going somewhere. We are talking about a training sequence after all. So Paks gets into some situations while training, one inevitable situation involving an attempted rape and some sort of magic compulsion…but mostly she trains in all the weapons she needs to and they travel south and then east, city by city. There are a few 3 page skirmishes but overall this reads like a manual to fantasy military life. There are dwarves, elves, gnomes, ect. in this world, but we only ever really see them fleetingly, or hear of them. There are various religions all of which are argued or pondered over but none of it really feels deeply rooted. The same can be said for the characters as all of the side characters who drop in and out of the narrative are rather cardboard, but worse the protagonist and her closest people are less than deep. Paks herself is not someone I felt I knew all that well after 430 odd pages.

If a news person went to Middle Earth during the war of the ring, got embedded with the troops of Gondor a few months before Fellowship started to see about military life, it might look and sound something like Moon’s book. Is it decently written? Aside from the cardboard characters….yeah, but there’s a difference between writing something that is technically good and something that is interesting. I was BORED.  < ---With all capitals!

My biggest gripe here is that after more than 400 pages, next to nothing happens. People talk and there’s a few fights but overall nothing in this world is threatening anyone. The South is made up of squabbling kingdoms that hire mercenary bands  (like Paks’ band) in which to fight and keep people from usurping their lands and titles. I’m sure somewhere there is a “big bad” but I never heard about him/her/it.

At one point, Paks’ sergeant Stammel mentions how south across the Immerhoft Sea is the continent where the people originally came from. Oh, it’s an abandoned wasteland now…he says.

What? How? Now THAT is interesting! What happened to them? How did that society fall?

Damn. Really? I get a little tidbit of something interesting in an otherwise plodding, boring narrative and no one touches on it again? Are you kidding me?

I’ve read some other negative reviews of the book that echo what I am saying here and there were some caustic comments to those reviewers about how it’s part of a trilogy and to read the other books before commenting.

No. Sorry. I shouldn’t have to read 500 pages before something happens to interest me. Trilogy or not, that is an example of bad storytelling. Now, I fully understand that Moon was in the military and a soldier’s life is what she wrote about because she it’s what she KNOWS. I’m not decrying that at all, as that insight into fantasy military life CAN be fascinating (and one should always write what they know)…but if is goes on and on and nothing happens, then the story you are trying to tell will stagnate. Tell me a military tale from the soldier’s POV, but in your first volume something really significant has to happen. Otherwise what’s the point? Another thing is that the side characters should all have personalities that are deeper than name/birthplace/religion. Cook can do it, even though his writing is workman-like, Croaker or One-Eye have more personality in their thumb than Paks did in almost the whole book.

Not for me. Thus is this title a DNF and as such I won’t add it to the review archive since this isn’t a review, but rather an explanation for why I “Did Not Finish” it.

Posted by GunMetalBlue at 7:14 AM

Email ThisBlogThis!Share to TwitterShare to FacebookShare to Pinterest
Labels: did not finish, Elizabeth Moon, sheepfarmers daughter, the deed of paksenarrion