Book Review: Grass For His Pillow (Tales Of The Otori Book#2) - Lian Hearn 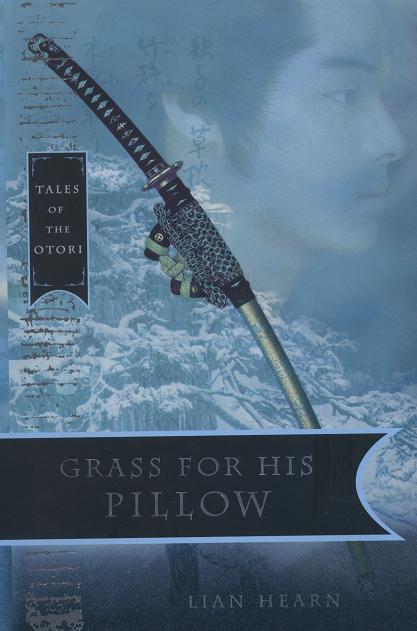 Because of how incredible the first Tale Of The Otori (ACROSS THE NIGHTINGALE FLOOR) is, it’s inevitably going to be an act that is seriously hard to follow. Especially with the way events were left at the end of the first novel. With certain factions defeated, it comes to others within the world to rise to be the antagonists and our protagonists have to be changed by their experiences.Thus is the second book a slightly different animal, but nonetheless an enjoyable one.
If ACROSS THE NIGHTINGALE FLOOR was the move for Takeo and Kaede from unknowing children into teens, then GRASS FOR HIS PILLOW is the even rougher transition from teens into adulthood.
Takeo has played his part in saving the Three Countries from Iida, but the cost was high. His mentor and adoptive father Otori Shigeru was betrayed and killed. Takeo, having learned his father was a member of the ruthless group of assassins known as The Tribe in the previous volume that aspect of the narrative is expanded upon here. In return for allowing him to rescue Shigeru’s body from Inuyama he must go with them to be trained by the enigmatic spy killers. The worst of that is leaving behind Kaede, whom he loves, and disobeying Otori bannerman and new ruler Arai to honour his pledge to return to The Tribe. Kaede is also dealing with loss (her love Takeo), her mentor (Maruyama Naomi) who also died at Inuyama, and is also seemingly having to bow to Arai Daiichi, an easily offended, stoic warrior who takes control of the Three Countries in Iida's abscence. She escapes under the flag of returning to her home in Shirakawa to see her father and spend the winter before coming to see Arai again. This gives her time to plot how she can avoid marrying just anyone for politics and hopefully eventually end up with Takeo…and topping it all off she’s pregnant with Takeo’s child.
This volume in the series is what I would deem as a world-builder. The way things got left in the first book make for the need to drop the pacing down as characters spend the winter positioning themselves for what is to come. This includes Kaede dealing with her abandoned lands, ailing and crazy father, developing a relationship with a kind nobleman near Shirakawa named Fujiwara amongst other events. Takeo learns that The Tribe mostly dislikes him because he was raised by the common Hidden, and the noble Otori all of which has given him traits they abhor, most annoying to them…compassion. Takeo only has Tribe member Yuki to comfort him, but is everyone in the Tribe what they seem? What events led to his father’s death? Suddenly, almost stuck and snowed in the Northeast Takeo makes some startling revelations.
Everything that happens in this novel is preparing for future events, and as such all the characters, for the most part, stay still (until near the end). In someone else’s hands this might be boring, but Hearn once again proves why her prose is so amazingly realized and lovingly rendered. You can read pages about Kaede and not notice that she’s not done a whole lot. That’s a good thing, as this book could have suffered from “middle-book” syndrome and slogged. Luckily, it never does and the slower pace actually lends to the narrative being the way it is. I took my time with this one as to not devour it too quickly and was rewarded with a very enjoyable reading experience.
The third act again ramps up and things start to really happen. Especially with some surprising revelations near the end I am definitely hooked for the next one. The spring thaw is in full effect and the pieces are set into position on the gameboard and all that is left is to begin moving them. This book works as such a great overture for the next book that I simply can’t wait to see what happens in the next one!
A slower, more deft read than its predecessor, GRASS FOR HIS PILLOW is a charming follow-up that will keep you interested and fill out more of the world that our protagonists inhabit. If you enjoyed the first one you ought to enjoy the second as well.
Posted by GunMetalBlue at 7:36 AM

Email ThisBlogThis!Share to TwitterShare to FacebookShare to Pinterest
Labels: grass for his pillow, lian hearn, Review, tales of the otori book 2