TV Review: GAME OF THRONES - Episode 7 (You Win or You Die) 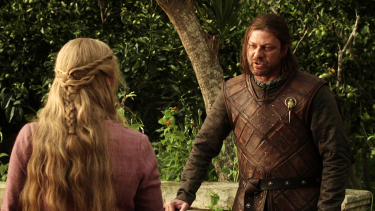 You know how you can tell you’re watching something on HBO?

Ten minute, not at all gratuitous, lesbian sex scene as backdrop for speechy monologue. That’s how.

If naked women isn’t your thing, don’t worry, there’s some brief wangitude later on in the episode. Just in case you should ever forget you’re watching adult and edgy cable entertainment.

Tywin Lannister lectures his son Jamie about the importance of the family name and freeing his brother Tyrion from control of the Starks, unaware that Tyrion has already managed to secure his freedom all by himself.

At King’s Landing Littlefinger coaches his new hire, the highly desirable Roz, in the ways of pleasure (see above) when he decides to speechify and reveal how he prefers clandestine political manoeuvrings over more direct forms of confrontation.

Meanwhile Ned Stark and Cersi Lannister continue their endless struggle for power, with Ned threatening to tell the King about her indiscretions with her brother unless she takes her children and leaves the capital. Its political one-upmanship with each character convinced they have the upper hand but seemingly unwilling to make any overt moves against the other.

Ned is summoned to the King’s chambers where it is revealed that Robert was accidently gored while hunting a bore. Ordering all his retainers out of his bedroom Robert gets Ned to draw up a will where he proclaims his friend to be the Regent and Protector of the Realm after he dies.

Across the Narrow Sea Khal Drogo, leader of the Dothraki, seems reluctant to invade Westeros. He has a change of heart when a traveling wine merchant makes a failed attempt to poison Daenerys and instead vows that one day his son will sit on the iron chair of his mother’s father.
At the Wall Jon Snow’s class of recruits finally graduate to full Brothers of the Watch. However, Jon is upset when he discovers he has been made a Steward instead of a Ranger. Samwell Tarly points out that Jon is being groomed for command and that his appointment as Steward is actually a boon.

Finally, with Robert’s health failing, various factions within the capital scheme and plot to grab the king’s power for themselves. Renly, the king’s younger brother, offers to join forces with Ned to claim the throne for himself. Littlefinger implores Ned to let Prince Jofferey ascend to the throne, with the knowledge that they can use his questionable parentage against him in order to control his actions. However Ned is determined that the throne go to the rightful heir, Robert’s older brother Stannis. Ned strikes a deal with Littlefinger to use the City Watch to reinforce his soldiers as his own household guard has been depleted.

It’s great to see that this week’s episode fully embraces what I was touching on in my review last week, the need use the books as a referential touchstone for the series instead of a detailed roadmap to be slavishly followed.

The writers have clearly figured out that they’ve been handed a veritable goldmine and are plundering the characters and their relationships for all they’re worth.

Which is why viewers are being treated to all these great two handers where Sean Bean alternates between looking confused and looking grim. The difference between the two expressions, slightly more forehead wrinkles on the former.

No seriously, the actors in this show are getting fantastic opportunities to chew the scenery with other. It’s gripping, high drama stuff and as the show becomes more confident in its footing my knowledge of the books becomes increasingly irrelevant, as new scenes are being slotted in to up the drama quotient.

And that’s been my biggest hang-up with this show. Knowing what happens next is robbing me of any opportunity to be surprised by the Machiavellian twists and turns that GAME OF THRONES constantly tosses out.

As the show continues and its narrative momentum builds I’m getting more and more caught up in the story it’s telling. By standing on its own two feet, the whole thing feels fresh and new again.