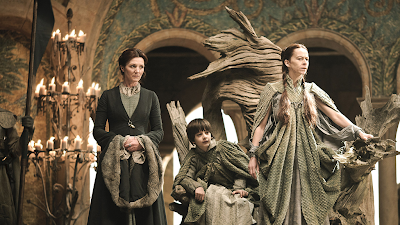 With the start of Sunday's episode HBO's sprawling fantasy series officially passes the halfway mark of its first season.

Which means its now fair game to take a critical look at the series as a whole instead of just examining it on an episode by episode basis.

Ned Stark awakes after his ill fated encounter with Jamie Lannister to find that he has been press ganged into serving the king again.

Stark's role as the King's Hand becomes more complicated when Robert decides to leave King's Landing for an extended hunting trip. Forced to sit on the Iron Throne and temporarily rule in his stead, Stark find himself turning up the heat in the capital when he denounces Gregor Clegane as a brigand and summons Tywin Lannister to court to answer for the actions of his bannerman.

Meanwhile in the North Ned's son Bran is troubled by a series of disturbing dreams. During the day he finds relief by riding through the grounds of Winterfell in a modified saddle based on a design by Tyrion Lannister. Bran's ride is interrupted when he is attacked by a group of wildlings fleeing South.

In the Vale Tyrion remains a prisoner of Catelyn Stark's sister and her sheltered son. Trapped in an open air cell in the uninpregnable sky fortress he stands accused of the murder of Jon Arryn, the former King's Hand, as well as the attempted murder of Bran Stark. In order to delay his execution Tyrion demands the right to Trial by Combat.

Finally Daenerys continues to work at being accepted by her adopted people. To prove herself worthy of carrying Kahl Dorgo’s son she forces herself to eat a raw horse heart.

Mindful of his sister’s growing popularity, and recognizing that his own dreams of reclaiming his familial throne are fading away, Viserys attempts to steal Daenerys petrified dragons eggs to fund an army of his own. When he is stopped by his sister’s retainer he bursts into the Dothraki celebration and threatens Daenerys and her unborn child.

Drogo promises to give Viserys the crown he deserves and pours a cauldron of molten gold over his head, killing him.

GAME OF THRONES is well past the stage where it needs to set the scene for the audience. The question of “who are these people” and “how do these people relate each other” have long been answered.

But if there’s one criticism that can be levelled against the series at this point it’s that it seems overly dependent on the source material to drive the story forward.

It feels like there is an absence, a blindness that permeates the show when it comes to respecting the tropes of modern television. The show eschews the deep character examinations of modern cable dramas in favour of moving pieces around because that’s how the story was laid out in the books.

Instead characters are delivered to the audience fully formed with clearly realized motivations and goals and not much in the way internal turmoil.

Part of the reason for this flatness is that much of the character internal monologuing in the books has gone up in smoke in the transition between mediums and the writers are continuing to struggle when it comes to reinserting the excised material back into the show.

One of my favourite scenes to date came during last week’s episode when Cersei and Robert were rehashing their relationship against the history of the Seven Kingdoms. The scene, not found in the books, explicitly examined the tension between the couple, but the subtext and internal conflicts that were at play really sold the moment.

It was a great example of being true to the aims of the source material but still respecting the demands of television at the same time.

The longer GAME OF THRONES exists as a separate entity the more it’s going to have to establish its own personality outside of the books.

No matter how great the show is, if it continues to be hampered by rigid faithfulness to the original material it will be robbed of the creativity and vitality it needs to truly succeed.
Posted by Chris at 6:13 PM