Upcoming: Cover Art of The Departure by Neal Asher

Happy Monday! Neal Asher is a name in sci-fi that seems to garner praise on level with Alastair Reynolds, Richard Morgan and Ian M. Banks. While I have not yet read his Skinner books, somewhere in my To-Read pile is GRIDLINKED, of which I hear great things.

Well, cover art has debuted for his forthcoming new Polity book THE DEPARTURE, and here's the synopsis as well. 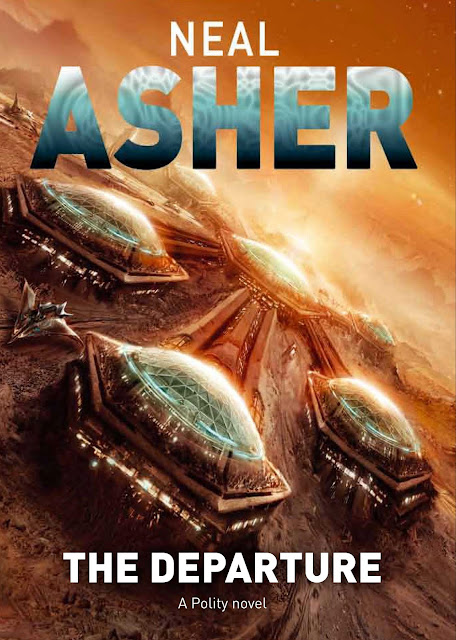 ﻿There are no more wars, just police actions, though sometimes the truncheon used weighs in at about a kilotonne and the undertakers have to wear hasmat suits. Nobody goes hungry, so there certainly aren’t any food riots – just ‘dissident actions’ which end abruptly when the Inspectorate reduces the crowd to a writhing screaming mess using pain inducers.
And didn’t Chairman Alessandro Messina himself say that we are more free than ever before; community political officers conducted a survey only last year to prove this point. The Press has greater freedom too, now being government run and unburdened by financial concerns. People don’t disappear, see, they always come back from Inspectorate cells, ready to sing the praises of the Committee.

But Alan Saul knows that twelve billion are due to die, that the Committee has decided the Safe Departure clinics, the ‘sectoring’ of zero asset communities, the reader guns, razor birds and nightmarish shepherds will not be enough. The Argus satellite laser network is their answer, and he intends to take it away from them.
Posted by GunMetalBlue at 6:40 AM