Book Review: THE TOWERS OF MIDNIGHT by Robert Jordan and Brandon Sanderson 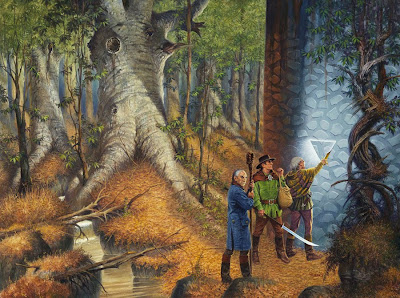 I’m going to give you the Reader’s Digest summary of events for the TOWERS OF MIDNIGHT. I figure if you’re reading a review for book 13 of a 14 book series then...

a) you don’t want me to be spoiling too much of the plot for you and
b) you’re probably pretty familiar with the characters involved and where things are heading anyway.

So, let's recap shall we? In this book, Perrin continues to struggle with his new found station as lord and commander over one of Rand’s ragtag armies, Egwene works to bring the fractious splinters of the White Tower under her control, Mat stalks the dangerous assassin known as the Gray Man through the streets of Caemlyn and Rand al’Thor, the Dragon Reborn, works feverishly to prepare his forces for the Final Battle he knows is sure to come.

(and much, MUCH more)

This both saddens and elates me.

On his own, Robert Jordan wrote the first eleven books, as well as a prequel title, in the wildly popular THE WHEEL OF TIME series. After Jordan’s untimely death in 2007, battling cardiac amyloidosis, Brandon Sanderson picked up the literary torch with the blessing of Jordan’s widow and has been working steadily at wrapping this lengthy series up.

And I have to say, for the most part, he’s been doing a bang up job.

When I read his first foray into the WoT universe, 2009’s THE GATHERING STORM, I couldn’t help but scrutinize the pages for signs of Sanderson’s personal literary voice.

I was concerned that a new author might not be able to inhabit or seamlessly channel the characters of this distinctive universe without accidentally putting their own stamp on it. After all, Jordan had 12 WoT books under his belt (yes, I’m counting the prequel) and was the sole architect of this expansive world. How could an outsider ever hope to fill those shoes?

But, credit where credit is due, Brandon Sanderson was able to absolutely and unequivocally nail it…kinda.

Before you break out the tar and feathers hear me out.

I think you’d be hard pressed to find a WoT fan who wouldn’t cop to the fact that somewhere around the fifth or sixth book the pace of events started to slow down a lot. This was a result of expanding the series beyond its initial ten books*. Suddenly the same amount of material was expected to be streeeeetched over a greater number of novels.

Presumably Jordan filled the empty pages by padding the development of his central characters. And I couldn’t help but notice that secondary characters suddenly gained a greater prominence in the series, with a large number of chapters being devoted to the resolutions of their own personal sub plots.

Whatever the reason, a series that was previously characterized by its blistering pace suddenly got bogged down in wet cement. Important characters would disappear from entire books, significant plot points would be spun out over multiple novels and rather than actually doing ANYthing, everyone seemed to be content to just sit around and talk about doing SOMEthing.

Now, to be fair, it’s not as if the whole plot came to a screeching halt. Major significant events continued to be portrayed throughout the series. Only now there were far fewer of them and they seem to be confined to climax\cliffhanger type endings, intended to whet reader appetites for the next book.

I’m sure that the ever expanding continuity of the series also played a part in slowing things down. That’s one of the dangers of a maturing literary world, when you’ve got that many story threads on the go it’s impossible to give each one the attention they deserve. So Jordan spread the love around, focusing a little bit of time on developing each one, but not significantly advancing the story of any of them.

The first half dozen books in the WoT series were notable because things kept HAPPENING. (And not just in the climax either.) New characters were always being introduced, interesting story elements were being tossed into the mix and characters would noticeably develop and grow over the course of a single book. The series was addictive.

To switch gears from a story that was characterized by its dynamism and energy to one that seemed to be full of endless talking heads and pointless descriptions was disheartening. (Watching my favourite characters vanish in smoke for entire books, even more so.)

For awhile there I was reading the WoT, not because I was actively enjoying it, but because I had invested so much time and energy in the series to date that I just had to see how things finished. And that is the wrong reason to be reading anything.

So the point I was trying to make, before I got caught up in a painfully long diatribe, was that Sanderson’s work on THE GATHERING STORM sure as hell sounded like Robert Jordan, but it didn’t really feel like him. And I think that can all be traced back to the fact, finally, things were happening again in the series. I’d gotten so used to having the WoT spin its wheels that I’d forgotten what it was like to actually to be excited to read these books again.

Now, I believe I was supposed to review the TOWERS OF MIDNIGHT?

The biggest problem with batting clean up on a series like this is that a lot of time and energy is being expended just wrapping things up. You get an idea of just how out of control things were and how many dangling plot threads were kicking about by the fact that its going to take three giant ass books to deal with them all.

It should be clear to even the most cursory WoT fan that Sanderson has done his homework with this book. The man seems to have an unparalleled grasp on all manner of forgotten WoT lore. He resurrects obscure story devices and plot threads that even I’d forgotten about. On the one hand, it’s great to see the author going the extra mile to be true to the WoT world by trying to tie everything together. But the flip side of that argument is with so much material to cover I’d actually forgotten that some of these story points were unanswered in the first place and even needed resolving.

I wasn’t thrilled to see so much time spent on the resurrected Aelfinn and Eelfinn subplot. Even though it had a guaranteed fan approved payoff I’ve always felt that the world of the Aelfinn\Eelfinn was a bit of an anomaly in the WoT and didn’t really fit into nature of things.

It’s also frustrating that in many ways, Sanderson’s work on the series is restricted to wrapping up Jordan’s story. There is an underlying sense in the book that he knows where the characters are supposed to end up for the Final Battle, so he spends his time moving the characters around like an elaborate chess game in order to get them there. So while reading the book I never really felt a sense of threat or danger, as all the central characters seem to have been given a hall pass that guarantees they’ll make it, mostly undamaged, to the final book.

(Now having said that, I wouldn’t be at all surprised if the final chapter in this series turns out to be a bloodbath of sorts, with many of our heroes being killed during the course of the Final Battle.)

Yet despite these limitations Sanderson does his level best to ramp up the physical and emotional stakes for our characters. He may be tasked with bringing the whole thing to a close, but damned if he isn’t going to try and earn that standing O in the process. The stakes are for keeps and no one can accuse him of plodding along. Just because these characters might be getting a free pass doesn’t mean he’s not going to make them work for it.

If its seems that I’m only focusing on the parts of the book that were unsatisfying its only because no one wants to read 2,000 words of never-ending effusive praise.

There are so many things that are done right in this book.

The exquisite plotting, the painstaking research, the spot-on representations of a diverse cast of characters and the sheer skill needed to reconcile 20 years of storytelling into 800 pages is awe inspiring.

To point out some of the shortcomings of the book is not meant to tear it down. Rather, given the scope of the endeavour, it is testament to Sanderson’s ability as a writer that there isn’t more to criticize.

Brandon Sanderson has done something for me that I thought was nearly impossible, he made reading the Wheel of Time fun again. And for that, I owe him my thanks.

*My google fu appears to be broken. I can’t find the reference that backs me up on this. Maybe someone else can step up and point me in the right direction.
Posted by Chris at 10:49 AM