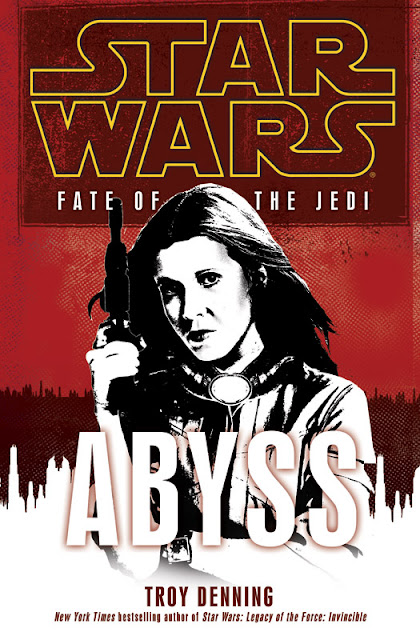 Following a trail of clues across the galaxy, Luke Skywalker continues his quest to find the reasons behind Jacen Solo’s dark downfall and to win redemption for the Jedi Order. Sojourning among the mysterious Aing-Tii monks has left Luke and his son Ben with no real answers, only the suspicion that the revelations they seek lie in the forbidden reaches of the distant Maw Cluster. There, hidden from the galaxy in a labyrinth of black holes, dwell the Mind Walkers: those whose power to transcend their bodies and be one with the Force is as seductive and intoxicating as it is potentially fatal. But it may be Luke’s only path to the truth.

Meanwhile, on Coruscant, the war of wills between Galactic Alliance Chief of State Natasi Daala and the Jedi Order is escalating. Outraged over the carbonite freezing of young Jedi Knights Valin and Jysella Horn after their inexplicable mental breakdowns, the Jedi are determined to defy Daala’s martial tactics, override Council Master Kenth Hamner’s wavering leadership, and deal on their own terms with the epidemic of madness preying on their ranks. As Han and Leia Solo, along with their daughter Jaina, join the fight to protect more stricken Knights from arrest, Jedi healers race to find a cure for the rapidly spreading affliction. But none of them realize the blaster barrel is already swinging in their direction–and Chief Daala is about to pull the trigger.

Nor do Luke and Ben, deep in the Maw Cluster and pushing their Force abilities beyond known limits, realize how close they are–to the Sith strike squad bent on exterminating the Skywalkers, to a nexus of dark-side energy unprecedented in its power and its hunger, and to an explosive confrontation between opposing wielders of the Force from which only one Master–good or evil–can emerge alive.

Troy Denning always seems to ramp up the tension and the adventure. In the new Star Wars: Expanded Universe story arc style (ei. 9 books, 3 authors, one continuing story) adopted with the Legacy Of The Force books (about the fall of Jacen Solo to the dark side) and continued with these, the Fate Of The Jedi books the plot needs to stretch out and the authors are aware of this. What’s funny, is that in both series everything is going along tickety-boo till volume 3 and then Denning enters the fray and starts to ramp everything up. The best thing about that is that it makes for a stellar third book that has everything I love about Star Wars and nothing I don’t.

That’s how I knew going in that I was bound to love ABYSS (as I loved TEMPEST, third book in the LotF series before it), cause Denning always brings the show.

ABYSS picks up immediately after the previous volume (Christie Golden’s very decent OMEN) and finds a few plotlines headed towards one another. On Coruscant, two more Jedi go wonky with the plague but both spent time as children at Shelter (a hiding place during the Kilik crisis inside the Maw, a place in the center of a number of black holes) solidifying the theory that it started there. Han & Leia are trying to hatch a plan to get Tahiri Veila offworld to hide her from Daala’s government witchunt. Jaina Solo and Jagged Fel are trying to use political avenues to show the public that this persecution of the Jedi is inhumane. Meanwhile Luke Skywalker and his son Ben are inside the Maw at a replica of Centerpoint Station where the fabled Mind Walker’s reside and both get closer to not only the Dark Side, but death in their studies of Jacen’s path. Then add Vestara Khai and the rest of the lost Sith Tribe on a collision course with the Skywalkers and you have what? A recipe for awesome. Just sayin’.

Let me say first off that Ben shines in this book. He literally jumps off the page with teenage angst that is being tempered by Jedi knowledge and restraint. That’s a really great thing to witness. It was also something Jacen never had. Jacen blazed his own path and it led him to the Dark Side, he was powerful, but completely untempered. Watching Ben exhibit early signs of those same strengths, but having them be checked and molded by his father, Grand Master of the Jedi Order (not to mention the most powerful Jedi in the galaxy) is not only amazing, but gives me hope for the future that he will one day make a good Grand Master himself. He seems to epitomize a lot of the same traits his namesake (Obi-Wan Kenobi) had.

Then you have Jaina and Jag’s impending nuptials and their parents’ aversion to it. To me, Jag really IS a little too honourable and straight-laced to ever put Jaina ahead of his job as Head Of State for the Imperial Remnant. It’s nice that Denning does nothing to sway us to believing he is. He isn’t. Which makes me believe that at some point down the road he will either start to do so….or Jaina won’t marry him….or even better, he doesn’t change and Jaina DOES marry him and it creates a myriad of problems.

I think the only lackluster bit here is that once again Han & Leia are using the Falcon to try to help someone escape against orders ect. In the beginning of the novel the two are doing things that they don’t normally do and it was refreshing that they weren’t up to their tricks that they do in every volume…they were growing a little. Unfortunately it doesn’t last and one of the two action sequences at the end of the book is back to status quo for H & L Solo which can be a bit boring after they’ve done it for the twentieth time. Thankfully, the OTHER action sequence between the Skywalkers and their initial meeting with members of the lost Tribe of Sith is all blaster sizzle, lightsabers, and grenades. Loved it!

Anyways, this one was great most of the way through and to me was easily the best in this series so far. I wholeheartedly look forward to the 4th book BACKLASH. Moreover though I am starting to get an inkling of where the series is headed and I feel it is a very interesting story and it seems like we’ll be in for a treat at the end, especially because Denning will be the one writing the final book.

Great stuff!
Posted by GunMetalBlue at 5:45 AM