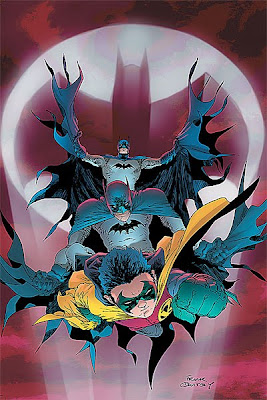 BEST OF THE WEEK

Bruce is back baby. Even though he has yet to technically return, due to the delayed shipping of RETURN OF BRUCE WAYNE #6, this issue marks the official appearance of Bruce back in the 21st century. And, of course, the first thing he does is start putting his house in order again, mostly by driving his first through other people’s soft palettes. Look, if you’re coming late to the whole Grant Morrison meta-epic, do yourself a favour and catch up on annotations from previous issues. It is the only way that you’ll have even the foggiest idea of what is going on. Honestly, this is not the kind of series that you pick up halfway through. Yer either a reader right from the start, or you're not reading it at all.

This is a fun issue, which is suprising given some of the subject matter, and I’m happy to see Morrison working with some of his strongest creative partners, including Cameron Stewart and Frazer Irving. Although, seeing a Frank Quitely cover on the front of this title every month just makes me wish he was doing the interiors as well. Anyway, it looks like Morrison is stealing a page from his stint on NEW X-MEN and taking the Batman franchise public. I’m looking forward to the new direction.

Featuring the adventures of Hawkman and Hawkwoman...in SPAAAAAAACE! You know, its kind of disappointing how quickly Carter was able to forget about Kendra after she was killed during BLACKEST NIGHT and replaced with the classic Hawkwoman, Shiera. I guess the lesson here is that Hawkman will always love his Hawk-partner as long as he doesn’t have to work very hard to win her affection. Or maybe the lesson is the Geoff Johns will continue to tinker with these characters and their origin story until he has it just right. Anyway, in this issue Hawkman fights the Manhawks of Hawkworld (say that ten times fast) in order to get save Hawkgirl. There’s also a little bit of pointless exposition thrown in to break up the fight scenes and some obligatory pontificating by the resident baddie.

BRIGHTEST DAY, still not COUNTDOWN and that’s all we care about.

Invincible and the Coalition of Planets task force take the battle to the Viltrumite’s home planet in the final apocalyptic battle of the Viltrumite War. Once upon a time INVINCIBLE was a fun and cheerful four colour comic that occasionally strayed into gory depictions of how a real superhero battle might go down. As a reader, the rarity of the violence only helped to increase its effectiveness. Nowadays it feels like the title border on torture porn with the creative ways Ryan Ottley disembowels, dismembers and otherwise rends characters limb from limb. Speaking of Ottley, he is the number one reason why you should pick up the title this week. The man has been unleashed on the pages within, turning out breathtaking (and horrific) splash pages that are inspiring in their scope and detail. The cover price was unnecessarily steep and I could have easily done without someone of the backup material if it meant dropping the cost a little. But otherwise, a fitting milestone for a title that continues to entertain.