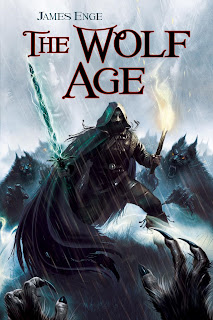 Wuruyaaria: city of werewolves, whose raiders range over the dying northlands, capturing human beings for slaves or meat. Wuruyaaria: where a lone immortal maker wages a secret war against the Strange Gods of the Coranians. Wuruyaaria: a democracy where some are more equal than others, and a faction of outcast werewolves is determined to change the balance of power in a long, bloody election year.

Their plans are laid; the challenges known; the risks accepted. But all schemes will shatter in the clash between two threats few had foreseen and none had fully understood: a monster from the north on a mission to poison the world, and a stranger from the south named Morlock Ambrosius.

My first experience with James Enge (and subsequently, his Morlock Ambrosius character) was actually with the Swords and Dark Magic anthology that recently came out, and I was actually VERY pleasantly surprised. So, it is with a certain amount of excitement that I look forward to the release of the third book in his Ambrosius series THE WOLF AGE. Here is the cover and synopsis. If you like your fantasy heroes to be hard drinking, heroic jerkwads, Enge`s Morlock is for you. Similar to Abercrombie, there is shades of grey that are often fun to read about in this character.
Posted by GunMetalBlue at 6:24 PM