Comic book reviews for the week of September 29th

A light week this time out, as I make good on my promise to keep my comic purchasing habits under control. So without further ado… 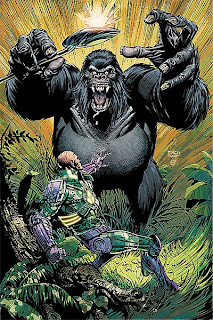 Like your Superman based comics to actually have Superman in them? Well then you’re in the minority chumly, because for the past two years the Man of Steel has been MIA in his own flagship title. These days ACTION COMICS is the stomping grounds for Lex Luthor and his quest to locate the power source of the Black Lantern Rings, after his own ring based adventures in Blackest Night

. This month, Paul Cornell and Sean Chen continue Luthor’s adventures amongst the Who’s Who of the DCU’s A-List baddies by engineering a confrontation with Gorilla Grodd (kneel before Grodd!!!). And don’t forget the backup starring perennial afterthought Jimmy Olsen and newly discovered afterthought Chloe Sullivan.

Green Arrow #4
I think that the character of Green Arrow has all the strengths of Batman, with none of the weaknesses that come from being that same wildly popular character, with multiple ongoing titles and a 70 year publishing history. In the larger DCU pantheon of heroes Green Arrow is a relatively untapped resource that is all too often overlooked. Unfortunately, in DC’s attempt to give him relevance and meaning they had to set fire to his marriage, morals, back story and supporting cast. All so they could pigeonhole him into mirroring a modern day Robin Hood mythos. The whole concept is uninspired and a little too ‘on the nose’ for my taste, even if the story is adequately handled.

My plan was to pick up this title only for its first arc under J. Michael Straczynski. The writing is perfectly serviceable and the story line is interesting, but I’ve never been interested enough in the character to follow her adventures on an ongoing basis. Unfortunately, while turning out an enjoyable script, JMS hasn’t done anything this month to make me change my mind about that. Interesting and enjoyable just aren’t enough to counter the paralyzing lack of interest I’ve built up around this character. I appreciate what JMS is trying to do, by playing around with one of DC’s golden calfs and seeing if he can’t alter her frozen status quo, just a bit. Anyway, this month WW continues to learn about her new role as protector of the Amazonian remnants in man’s world.
Posted by Chris at 12:30 PM