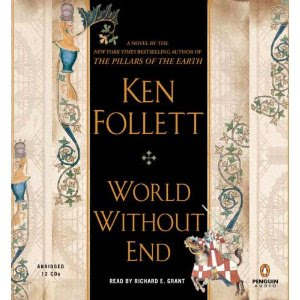 Enthusiastic readers who picked up World Without End

may be forgiven if they walked away from the story with more than a touch of déjà vu.

The book deals with the ongoing history of the fictional town of Kingsbridge in the 1300s and is a direct sequel to author Ken Follett’s popular 1989 outing, Pillars Of The Earth

Unfortunately, in this book, Follett has decided to play it safe and spends a painful amount of time playing with the same literary tropes and narratives that served him so effectively in his first outing.

Hey remember in the last book how the noble builder had to struggle against the devious clergy in order to build a magnificent cathedral to the glory of God? Well we’ve still got that, only this time, the church is a bridge!

WORLD is about what becomes of the lives of four children, Gwenda, Ralph, Merthin and Caris, after they witness a murderous encounter in the woods outside of Kingsbridge. The four watch as a knight, Sir Thomas Langley, is attacked by soldiers intent on getting their hands on a letter that Langley has been entrusted to deliver. With some help from the children, Langley holds off his attackers and manages to safely dispose of the letter.

The incident, and the letter, is forgotten by everyone (including the author seemingly) and the four go their separate ways. And what seemed to be a promising start to the book is eradicated as Follett quickly dips into his file of stock scenarios and does his best to re-create the world of PILLARS.

The number of plot devices Follett reuses is disappointing. There’s the forbidden relationship, the enforced ecclesiastical service, the corrupt religious characters and the degradation of the England’s soldiering nobility.

It’s all very well written and pleasant to read, but if I wanted to take on this story again I would have simply reread the first book.

It takes Follett over 400 pages before he strays from his literary dead end and starts to seriously explore the new Kingsbridge. And this is the story I want to read. The second half of WORLD is set against the backdrop of the rolling plagues that swept through Europe during the time period.

It’s new. Its different. And, most importantly, its not a retread of anything Follett has thrown at us before.

The plague not only serves as backdrop for the story but its presence, its influence, is so real and visceral that it almost acts like a character itself.

With this new direction, the story shifts into a higher gear as the effects of the plague prevent Follett from maintaining the status quo. Change, above all else, is what dominates now. Key supporting characters are killed off, new relationships are born and old ones are unexpectedly severed, the balance of power shifts constantly and with the threat of death imminent the inner workings of everyone’s character is thrust into the light.

Publishing a thousand page (plus) novel is no mean feat. It’s even more notable if you can get a mainstream audience to sit still that long, read it and enjoy it. And to do it twice on the same subject? My hat goes off to you sir.

Unfortunately Follett made his job harder by asking me to stick with a rehash of his first bookfor so long.

WORLD WITHOUT END is about two stories. The first is roughly 400 pages long and feels like a writing exercise that allows Follett to rediscover what attracted him to the world of Kingsbridge in the first place. The second story is about love, loss, sacrifice, corruption and hope against the backdrop of one of the worst plague outbreaks in human history.

If you can hang in there, it’s a story worth reading.
Posted by Chris at 11:01 AM