Movie Review: Why Wreck-It Ralph is one of the best animated films in years! 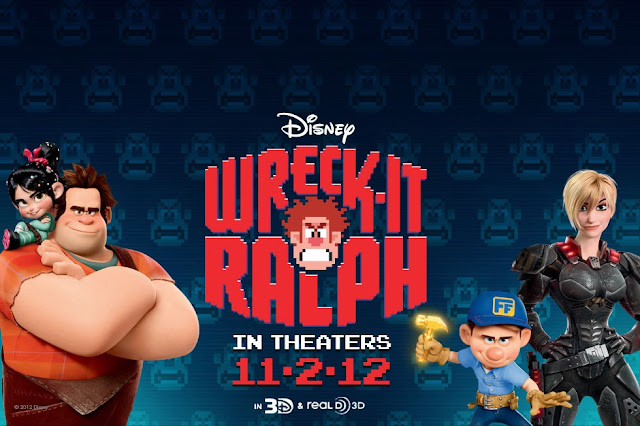 Sometimes when you see a movie on DVD / BluRay (or OnDemand), you sit back afterwards and think to yourself “Damn, I wish I saw that in the theatre! That was SO good!”

WRECK-IT RALPH is not only one of those movies, but probably one of the finest animated movies in recent memory.

One of the things that comes from watching Anime, especially family oriented Anime like Studio Ghibli films, is that the writers refuse to pander to their child audience. Life has heartbreak, life has sacrifice, and life is filled with a myriad of emotions, which can range from blissful happiness to lonely despair. I have always felt that the best family films are the ones that don’t sugar coat those things, but also still find a way to tell them in an interesting way.

WRECK-IT RALPH is a film that begins from a very sad aspect. Ralph is the bad guy in a Donkey-Kong-style arcade game from the 80’s called “Fix-It Felix Jr.” in which he….well, wrecks things for the hero to fix. He lives in a dump, sleeps under a blanket of bricks and for the most part is very lonely and disgruntled with his lot in life. No friends and basically being excluded from the celebratory proceedings of his game on any given day…Ralph goes off in search of a medal that might make HIM the hero for once. Through an arcade game nexus (cleverly designed as a joint outlet that all the games share) where the avatars of different games can interact, he battles his way through a modern combat FPS game called “Hero’s Duty” to get his medal. But on the way back things go awry and he ends up in a candy-based Kart racing game called “Sugar Rush”, and meets up with a game glitch named Vanellope. And that’s where things take off and never stop.

So, why the review title? Well, that’s easy. From the writing, direction, the character design, the setting, the clever video nostalgia in-jokes, the humour, and most of all the heart…this movie has absolutely everything going for it and nearly no stumbles at all.

The jokes are really funny (helped in no small part by perfect voice acting delivery by the likes of Sarah Silverman, and John C. Reilly), and clean. I find that these days comedy films tend to think that “pushing the boundaries of uncouth humour” and “making people laugh” are one and the same. But when a script like WRECK-IT RALPH comes along and can make lines of dialogue hilarious without the need to resort to anything really low-brow, it shows me that this doesn't have to be the case. Both the leads have a verve and rhythm to their witty repartee which was not only refreshing, but actually helps to cast the “boundary pusher” comedies further into the spotlight as “smacking of effort”. WRECK-IT RALPH seems effortless in this regard.

The second thing that will resonate (especially with older viewers) is the video game nostalgia. If you played video games in the 80’s and 90’s there is an absolute plethora of nods to your childhood here. They range from the very present and plot specific (Q-Bert and his pals being homeless but helpful, or a bunch of classic game baddies who attend a support group together, run by the lead ghost from Pac-Man), to the much more obscure easter egg stuff (like graffiti that says “Aerith Lives!”, a reference to FINAL FANTASY VII). There are loads to see and find hidden in the film and none of that ever feels like it is taking away from the story. I happily glanced around during larger crowd scenes to catch references (like the Joust birds, Sonic The Hedgehog, and Street Fighter characters like Blanka and Chun-Li).

Another aspect about it that kind of floored me (if only because I usually key into these things earlier), is that there are multiple plot points that when they are introduced are innocuously a part of the story and don’t seem to be anything further than that. But in the third act a few of them come into play VERY cleverly none of which I was expecting. So I got to be enthralled when they did and not feel like I saw them coming ahead of time.

Lastly I’d like to mention is that the story is absolutely 100% charming, and earns every single emotional beat that is offered up. I found myself getting misty more than once, and smiling like a madman more than once as well. I can’t tell you how wonderful the final act of the films plays out, it’s just well written, acted and presented and you owe it to yourself to watch and find out why.

As entertaining for kids as much as it is for adults, WRECK-IT RALPH is a triumph of filmmaking in a way that not a lot of films GET to be these days. It is allowed to be bright, colourful, whimsical and a whole heck of a lot of fun. In a medium in which audiences are increasingly asking to be wowed on a high level, and who demand every film to blow them away otherwise it was a waste…WRECK-IT RALPH succeeds like old 80’s movies did. It takes a very simple premise, and then expounds upon it in a number of unexpected ways and allows itself to still be high-caliber fun in the process. What you end up with is something I am glad to called one of the best animated films I’ve ever seen.
Posted by GunMetalBlue at 7:00 AM