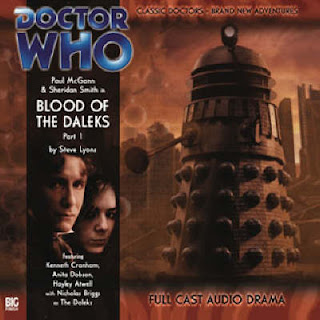 After finishing and thoroughly enjoying my first Big Finish DOCTOR WHO Audio Drama (the 8th Doctor’s latest series, DARK EYES), I decided to go back to the beginning of the 8th Doctor’s main line of episodes (can I call them episodes?).

And I got to meet the indomitable Lucie Miller (Sheridan Smith)!

BLOOD OF THE DALEKS is a two-part story set around 2006 (Lucie’s earth-based time) and produced by Big Finish at the end that year, and stars the amazing Sheridan Smith as the 8th Doctor’s latest companion. It’s technically considered the first two episodes of a series (1.1 and 1.2 respectively) which runs 8 episodes.

I just want to get something out of the way first. I actually can’t truly describe the joy I get from listening to these Audio Drama’s; they are an absolute treat, and I hold myself back from listening to each episode in a row so I can savour them.

So this story begins much the same way that the 10th Doctor’s Series 2 Christmas Special (THE RUNAWAY BRIDE) did, with a random human woman appearing in the TARDIS, defying all logic and TARDIS defenses. The difference here being that it’s not some nefarious ploy by an alien race which causes it, (wait, maybe it is!) but this time the Time Lord High Council have put Lucie Miller in the Doctor’s TARDIS as a sort of Witness Protection Program to a mysterious event she witnessed that was otherworldly, and locked her there. The Doctor is taken totally by surprise by her and decides to immediately take her home (2006 Northern England)…but the Time Lords have thought of that and the two end up shunted onto a world called Red Rocket Rising. The planet has recently been struck by an asteroid and is experiencing a sort of nuclear winter, REAL acid rain is falling and the people who remain on the planet are furiously attempting to get off but being stymied by a lack of governmental coordination. Said government, in the form of a woman named Eileen Klint, have sent out a distress call and had it answered by a race of beings who have promised rescue. There is only one problem…those rescuers are a fleet of Daleks. Further interesting is that a local, recently deceased, scientist has created his own versions of Daleks and his apprentice has taken up his work at trying to make them the new form of dominant life on the planet. 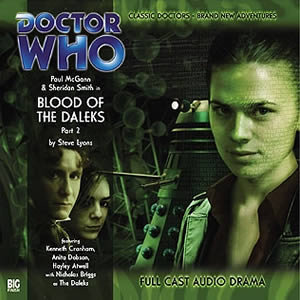 It’s a really interesting tale all told, and explores things like the Dalek’s TOTAL ethnocentric personality. They view these new Daleks (created with the remnants of the people of Red Rocket rising) as abominations, impurities of the Dalek pure bloodline. In that vein, the Doctor has to switch sides a few times to defeat both the real Daleks and the new Daleks, but for him they are both enemies. Again it’s interesting to see a pre-Time War Doctor tackle the Daleks. He’s not QUITE the 9th Doctor level of hatred for them…but you can see it building here. As far as the Daleks go, they are still in “conquest” mode as opposed to their later “destroy the universe” mode, so I’m curious to see when that transition happens, and maybe even why.

Paul McGann and Sheridan Smith are absolutely on game here. While their relationship begins rather rocky, with each one spitting barbs at the other due to a mutual mistrust (brought on by the Time Lords secrecy to both of them), by the end you CAN see the hinting of the relationship to come, the friendship. Perhaps that’s why they work so well together, she’s full of fire and vigor, and he’s full of energy and drive. I mean you really come away thinking there’s nothing they CAN’T accomplish. I love this Doctor/ Companion relationship…it’s just so easy to get on side with them. The peripheral actors are no slouches either, Anita Dobson (as Eileen Klint), Kenneth Cranham (as Tom Cardwell), and especially Haley Atwell (as the scientists’ apprentice Asha) all do a wonderful job at filling out the cast.

As a DOCTOR WHO story goes, this one is easily right up there with anything on the TV series. Classic villain, Doctor and Companion in a really complex situation that neither fully understands, and a whole world and its people at stake. What’s not to like? This is how I like My DW. The production is stellar as per usual, creaking doors, pulsing rain, space ships, TARDIS beeps and whistles, and (my personal favourite) the TARDIS in the middle of a road crashed into by a car and not getting a scratch! That was a great moment on an "audio" level for me. Fun stuff!

I find it endlessly impressive that Audio Drama's can really bring these stories to life to this degree. I mean they must have it tough getting across what's happening, script, sound effects, acting...all has to happen without the visual. Well, not only do they pull it off, but they pull it off splendidly in a way that makes me proud to display the discs next to my TV Series DVD's and BluRays.

I love this series and as soon as the Christmas Gift Buying season is over, I will be buying and reviewing a bunch more. So please stay tuned, and I hope you are enjoying these reviews for the Big Finish Audio Drama’s

Trivia: When is a form of genre media an addiction? When you listen to the same Audio’s more than once and revel in the special feature interviews…yeah…that’s what this is like.
Posted by GunMetalBlue at 7:55 AM