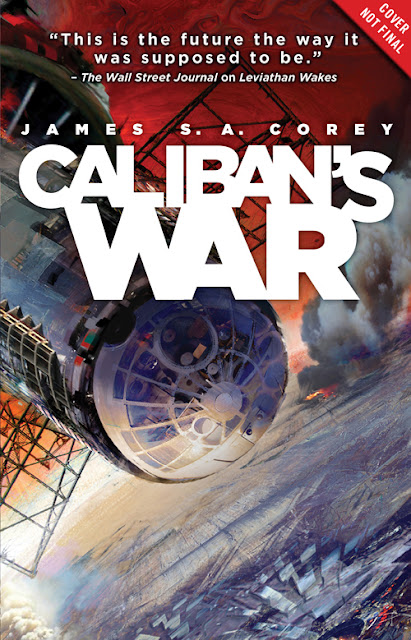 We are not alone.

On Ganymede, breadbasket of the outer planets, a Martian marine watches as her platoon is slaughtered by a monstrous supersoldier. On Earth, a high-level politician struggles to prevent interplanetary war from reigniting. And on Venus, an alien protomolecule has overrun the planet, wreaking massive, mysterious changes and threatening to spread out into the solar system.

In the vast wilderness of space, James Holden and the crew of the Rocinante have been keeping the peace for the Outer Planets Alliance. When they agree to help a scientist search war-torn Ganymede for a missing child, the future of humanity rests on whether a single ship can prevent an alien invasion that may have already begun . . .

I’ve said before how picky I am with my sci-fi and that usually what I like falls into the Space Opera category. I like my future and space travel with good action and melodrama, apparently.

Thus it is that James S.A. Corey’s (duo of authors) LEVIATHAN WAKES blew me away when I read it a while back. A rip-roaring space opera with a heavy horror overlay featuring a vast array of characters from all walks of life.

Now, where LW was pretty much entirely seen through the POV chapters of 3 characters, two of which featured most prominently (Space Captain Holden, and nourish detective Miller) throughout the narrative, the sequel CALIBAN’S WAR features Holden and even more POV’s (A scientist named Prax with a missing daughter, a foul-mouthed, elderly politician named Avasarala, and a displaced Martian soldier named Bobby) all of which serve to blow the world-building open even wider.

CALIBAN’S WAR takes what LW built, that of a galaxy at war with various political factions (Earth, Mars and the OPA [Outer Planets Alliance]) all vying for power whilst simultaneously attempting to contain / understand a protomolecule that horribly transforms people into “vomit zombies”, and takes it even further. The politics comes a little more to the forefront in this volume, mostly through the machinations of the hilarious and cunning Avasarala (probably my fave character this time around), but also I found it to be a little less horror and a little more space opera-y. Which is great, and speaks of the talents involved authoring the work, since the gears can change from book to book (this is something I’ve noticed that both Richard Morgan and Alastair Reynolds can do) which puts the Corey duo in great company.

The story this time is basically the aftermath of the protomolecules’ escape from Eros (See: Book 1) and subsequent crashing into and taking over of Venus, and the powers that be in the galaxy using the accident and each other to further their own designs. That rings true to me because for a vast section of time in this book the upper echelon’s of power don’t seem remotely frightened by the protomolecule and just how virulent and dangerous it is. Meanwhile on the ground floor with Holden and Co. even the appearance of the tiny black webbing that signifies the protomolecule absolutely freaks Holden out to the nth degree. It’s a nice braod shot of the universe that these characters inhabit and how far all the gov’ts involved have truly fallen. There is also a significant amount of personal growth and change amongst the crew of the Rocinante up to and including Holden. Everyone is beholden to the effects that their experiences in the first novel had on them. They are totally changed, and it is commented on a number of times by characters noting the changes in character. I really liked that attention to detail since it helps the characters ring truly.

In the end it was a wonderful sequel to the first book that not only continues the story, but opens the narrative up wider and allows for more plot strands to take shape. By the 3rd act of the book it becomes clear that the stage is being set for the finale, with a number of twists and table settings that will have repercussions in the final book. As solid a sequel book as anyone could have hoped for, this middle entry doesn’t suffer from any of the lag that 2nd books sometimes do and succeeds in making me very excited to find out just what is going to happen. Ty Franck and Daniel Abraham (the duo that compose a James S.A. Corey) have truly hit a vein of gold with this series. It’s treading new ground even as it uses classic tropes to tell the tale. Most of all it’s just a blast to read. If you are looking for action, intrigue, tense confrontations and blind heroism, look no further than CALIBAN’S WAR.
Posted by GunMetalBlue at 7:40 AM