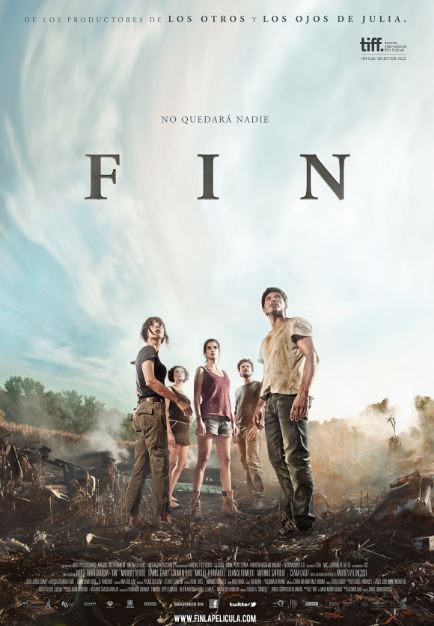 Apocalyptic films are usually from one of two very similar stocks.  Either something or someone has caused the event that triggered the end of society and some faction of that same force ends up hunting the protagonists, or the event that triggered the apocalypse is the end game goal of the protagonists. Either way, Hollywood USUALLY only relies on those two very well worn tropes.

Thankfully FIN was made in Spain, and newcomer director Jorge Torregrossa, and the writers (Sergio G.Sánchez, and Jorge Guerricaechevarría) decided to craft a film that wholly avoids either trope. Instead what they've done is make a movie about characters, and about life, and about what it means to have friendships, loves, and family. The sidestep of those tropes happens so subtly that you don't freely notice and the apocalypse mainstory still takes center stage, with the part of the narrative they concentrated on happening languorously over the two hour running time.

The cast is spot on throughout with no one dropping the respective ball at any point. Every emotion ends up on display, and the main cast (Maribel Verdú, Daniel Grao, Clara Lago, Carmen Ruiz, Blanca Romero, Miquel Fernández, Andrés Velencoso, and Antonio Garrido) allow themselves to slip into their character's heads with ease.

Basically this is the tale of a group of friends who are united for a weekend at a cottage in the Pyrenees by a strange, mentally ill friend whose motives are initially unclear. It is when they are there together that old rivalries and issues pop up lending the film an air of tension from the first ten minutes that never wholly goes away. In amongst this they wake up to find that nothing electronic works at all, and have to set out to try to find survivors of this apparent event.

Compelling, existential and resting easily on the laurels of its writers and director, FIN is everything you would be unsuspecting of seeing in an apocalyptic film. It succeeds in bringing something moderately new and brave to the table and what you will be left with in the end will be something very enjoyable and yet something you can certainly sit down and discuss and dissect with your friends afterwards.

Posted by GunMetalBlue at 5:19 AM