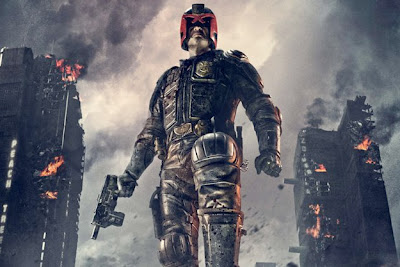 What would TIFF be without a few hiccups eh? The Midnight Madness screenings start around 11:59PM...normally. But when it comes to events like TIFF there are sometimes snags. Last night's snag came in the form of the film version of a Jack Kerouac book (On The Road) and Kristen Stewart which was the film (and its star attending) that screened before DREDD. It proceeded to start late and they STILL had to do a Q & A after. This basically resulted in our not getting into DREDD till about 1AM. Now during the festival I don't get upset about these things as they really do just happen with so many films screening over 10 days. So I just hit play on my iPod and listened to Gangnam Style again. :)

Happily around 1AM we were let in, donned our super expensive Dolby 3D glasses, and Colin Geddes (MM Programmer) introduced the director (Pete Travis), writer (Alex Garland) and both stars (Karl Urban and Olivia Thirlby). Urban gave us a little Dredd voice, and told us to "Enjoy the show, mother f*****". Ah yes, Midnight Madness!

Sidenote: News and review sites have been aware for a little while that there had been some sort of tension or upset on set between Travis and Garland for DREDD. Though no one is really sure what the extent of that upset was, Travis stayed seated through his intro and merely waved at the crowd, and Garland (who was stood about 3 feet from me, next to the wall) rubbed his jaw fiercely looking kind of uncomfortable throughout the intro. Take from that what you will.

Getting to the film. This was a balls to the wall, violent as hell Judge Dredd film. There is no way around the comparison's some folk might make to last year's super successful action flick THE RAID, as the premise is VERY similar...but as I've not seen that film I was able to enjoy DREDD for its own merits. And DAMN it has them. Instead of trying to concoct some elaborate criminal plotline, with mutants, corrupt judges, cloned brothers ect. (like the Stallone version), DREDD sets out to basically introduce Judge Dredd, his commander at the Hall of Justice, and to his rookie companion Judge Anderson, and then throws them into a block building run by a violent, unremittingly insane Ma-Ma (played exquisitely baddass by Lena Headley) where things are put into lockdown and the two judges have to fight to survive.

The dialogue is nearly note perfect. Every line Dredd or Anderson speak is amazingly on task for the Dredd mythos, and Ma-Ma herself gets some cherry lines. The visual design (something I was leery about ahead of time) actually worked decidedly well. Things aren't full blown futuristic or dystopian with Mega City One looking more like a huge conglomerate of current cities, only with added huge blockbusting skyscraping tenements that can house 70,000 people. It FEELS like what a future of our world might look like without attempting to be over the top. Once I settled into that, and especially when the protagonists were in the block (called the Peach Trees) it FELT like a good, solid futuristic film. The futuristic bits of the set  and character design ARE there, but they are in smaller details and that's part of what REALLY works about DREDD.

The action and gore is simply nutbar. In a great way. For example, have you ever wondered what it might look like when a bullet goes through a jaw in slow motion blowing teeth out the other side? Well, wonder no longer, DREDD has you covered. Basically don't expect them to skimp out on the violence that has always permeated Dredd comics in 2000AD magazine, it is here in spades. And in 3D some of those shots are...well simply amazing.

Is it a perfect film? No. It has a few minor flaws in the pacing department and the amount of villains that are sent against Dredd and Anderson. while you do feel they are in trouble, it never feels overwhelming to the point where you are truly concerned for them. I think a larger cast of thugs constantly being sent against them and wearing them down would have benefited the script. That's a small complaint though.

I can honestly say that I truly enjoyed DREDD. Anyone looking for a faithful adaptation of the character, need look no further. Seriously, DREDD delivers in spades there. Urban is perfect as the title character, and never, ever misses a beat. His voice, mannerisms and delivery of scenes was fantastic. Not to be outdone, Thirlby brings a realistic edge to the proceedings, and goes through a nice growth process over the 80 minutes to the point where in the last half hour she becomes nearly as badass as Dredd himself.

So, my first film at TIFF is a success. Much enjoyed. Go see this when it comes out later this fall. I plan to see it again for sure.

Posted by GunMetalBlue at 7:25 AM