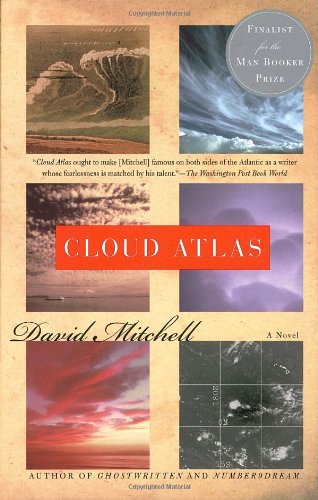 It’s been a while since I’ve had the chance to post a review, between real life intruding and reading a few doorstoppers (including currently), I’ve not had oodles of time for a proper review.

So how about one then.

I’m sure many of you have seen the recently dropped extended look trailer for Tom Tykwer and The Wachowski’s film adaptation of David Mitchell’s 2004 book CLOUD ATLAS. The gorgeous visuals and compelling confusion that the trailer elicited in you was not an anomaly, everyone had that same reaction. The urge to immediately go out and pick up the book to read it must have been strong…amongst the uninitiated that is…

For you see I am no stranger to David Mitchell. Many moons ago I heard about CLOUD ATLAS (basically in 2004 when it came out) and decided to test the waters with GHOSTWRITTEN (his first book) and NUMBER9DREAM (his second book) before trying out this much-lauded 3rd book. So I did just that. Both those early volumes are really good, cleverly assembled and realistically told. GHOSTWRITTEN suffers from a FEW debut author jitters, but is otherwise a good sign of things to come.

SIDENOTE: Funnily enough it was actually upon reading about David Mitchell that I discovered that his style aped that of Japanese national treasure, contemporary/surrealist author Haruki Murakami, and to which I will forever be grateful for leading me to that particular fave author of mine.

So when I sat down with CLOUD ATLAS I had an inkling about what I was getting into, but it would not be until years later and that self-same trailer led me to a re-read of the book that I would truly be able to see the transcendence of the writing. And no offence to Past-2004-Scott, but 2012-Scott is FAR better read than you are. It was a totally different, and still pleasing experience the second time around. And what’s even more interesting is that the parts of the tale I liked the least the first time became the parts of the tale I liked best the second time.

The easiest and most concise way I’ve heard CLOUD ATLAS described is as follows: It is like a Russian Nesting Doll. There are 6 narratives and all but 1 of them are split in the middle and end off sometimes midsentence, and then after the 6th (and the only complete story) in the middle the rest of the 5 stories pick back and up and we get an ending. So like 12345654321. Right? Got that bit? Okay, now let’s get to the clever bit. Aside from sharing the souls of the protagonists of each tale (exemplified by a comet-shaped birthmark), and sharing themes, the tales are also linked by circumstance. For example the 1st tale “ The Pacific Journal Of Adam Ewing” is being read by the main character of the next story “Letters From Zedelghem” who is writing about it in letters to his former lover, who is a big part of the next story “Half-Lives: The First Luisa Rey Mystery” which is a book series being read and attempted to be sold to a Publisher in the next one “The Ghastly Ordeal Of Timothy Cavendish”, which then becomes an old movie in the a futuristic Korean tale “The Orison Of Sonmi-451” from which a character becomes a mythical figure in the middle tale of a post apocalyptic Hawaii in “Sloosha's Crossin' an' Ev'rythin' After”.

So you can see that it’s been cleverly assembled. How’s the prose you might ask? It’s totally dense and complex, but splendidly crafted and though it takes you a bit to get into each tale with the different narrative voices (from different era’s), once you settle in everything becomes easy, clear and concise. Nowhere is this most evident than in the transition from “The Orison Of Sonmi-451” in which society has apparently dropped extraneous letters from words, “Exit” becomes “Xit”, for what one can assume is efficiency sake, and then in “Sloosha’s Crossin’ an’ Ev’rythin’ After” the dialogue (told from POV) is in an as yet shortening of nearly every word making it VERY difficult to read at first. This lends such an air of believability to a post-apocalyptic world in which dialects have further disseminated what was unneeded. However, once you click into the language and learn the tenets of it, it becomes wonderfully easy to read. It was a strange feeling and not one I will soon forget, and I've not experienced that before with a book.

The narrative splits happen at the best cliffhangery bits of each tale so that when you return to them you don’t sigh and think ”I have to get back into THIS story now” and instead you welcome that story back like an old friend. On top of that, the endings of each story are so well crafted and emotional that they resonate with you like hit after hit of passionate storytelling. It’s like watching the end of 5 great films in a row. Such an activity would leave you totally drained, but utterly satisfied.

Now that said, this book may not be for everyone, since it’s rather ambiguous with its plot points. The strands that tie them together are very important, but I think moreso it’s important to remember that these tales are meant as examples of facets of life, and discussions on those various things. “The Orison of Sonmi-451” (my fave of the 6) touches on cloning, slavery, and corporate dominance in the gov’t while at the same time being about birth, growing up and death. The more I sit back and think about it the more interwoven I find all these themes. And that is truly what this book is about.

A thrilling, complex, and beautiful book CLOUD ATLAS is a hell of a solid outing for Mitchell. For anyone who saw that trailer and was intrigued then you really should read the book first. It’s only going to enhance your viewing experience, to have that knowledge of the source material if nothing else. This book is the kind of contemporary read that will stick with you for years to come and is a fine example of non-linear yarnweaving that has not only 1 point, it has 42 of them and ties them all together in the most fascinating of ways.
Posted by GunMetalBlue at 10:37 AM