Anime-tion Tuesday? The Legend Of Korra 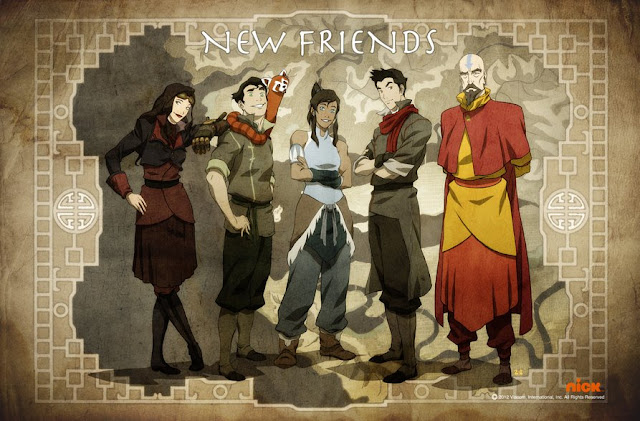 The series is set in a fictional world where some people are able to "bend", that is, telekinetically manipulate the elements of water, earth, fire, or air. Only one person, the "Avatar", can manipulate all four elements, and he or she is responsible for maintaining the balance in the world. The series follows Korra, the current incarnation of the Avatar, as she travels to the metropolis of Republic City to learn airbending and face an anti-bender revolutionary group called the "Equalists".


I know what you are thinking...this isn't Wednesday...well technically this show isn't Anime (in the traditional sense), it's American and not Japanese, thus Tuesday.

I’ve wanted to write this post ever since the show aired and finished its first season, but it always seemed like there wasn’t time to sit down and collect my thoughts about it.

That said, I really wanted to do the post justice since the show was such a resounding success and there may be those out there who are unaware of it, and so allow me to educate a little bit.

THE LEGEND OF KORRA is an animated show created by Michael Dante DiMartino and Bryan Konietzko and is a sequel to their previous, fan-lauded effort AVATAR: THE LAST AIRBENDER (the animated show, not the crappy live-action movie). Now, my experience with the first show was sporadic if at all, but the bits of it I did watch impressed me. Here was a show that was aping the Anime style, but fusing it with an American sensibility and storytelling. When I heard they were crafting a sequel series, basing it somewhere in the neighborhood of 100 or so years later, and the various nations and tribes (the Water Tribes, the Air Nomads, the Earth Kingdom, and the Fire Nation) though still existing as they were, are also now collected in cities like steampunkish Republic City where Bending is even a sport.

The first season (subtitled AIR), sets out to not only introduce us to the great characters, with protagonist Korra (who is the latest Avatar, having the ability to Bend all the elements, though she has trouble with Air) her pet polar bear Naga, and her uncle Tenzin (youngest child of previous Avatar Aang’s) and his family filling out the main roles. What’s great here is that the periphery characters that round out the cast are really what make KORRA shine. Bending team brother’s Mako and Bolin, Asami who is the daughter of a car and technology magnate, fan favourite Lin Beifong who is a metal-Bending chief of police, and even the villain of the first season, an upstart, masked terrorist named Amon who is out to get rid of Bending and seemingly has the ability to remove people’s Bending capabilities permanently. It’s a robust group of people, each with their own purpose in the narrative, but the voice acting just pushes them out at you on a scale you don’t usually see in American animated shows. They are vibrant, and full of life and by 3 episodes in you will care more about what happens to them than you might in some live-action shows.

The animation quality is really high. Everything pops with life, colour and fluidity. Were I to compare the animation to a lot of shows by the big animations houses and Japan I think I might find that KORRA can swing with the best of them. 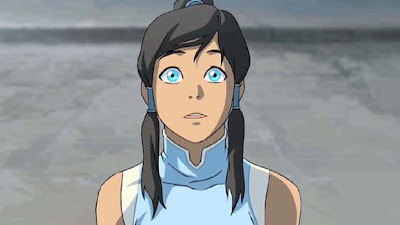 The idea to only do 12 episodes was a stroke of brilliance on the part of the show’s creators. Basically the 12 episodes are lean, mean and cut to move. The pace is relentless and there is not an ounce of fat or bloat on the narrative. Everything that needs to be in the storyline for the first season is there, and any superfluous stuff was sensibly cut out. This leaves us with 12 hours of pure, unadulterated mature storytelling that has all the hallmarks of good fiction. Love stories, family links, past histories, political machinations, and action set pieces are handled extremely well. The show ALMOST ends on a stubborn cliffhanger, but relents and give us about 5 minutes more in which it sensibly wraps up that cliffhanger, but still manages to make us salivate for the next season to begin (coming in 2013).

THE LEGEND OF KORRA is both a worthy successor to AVATAR: THE LAST AIRBENDER as well as a completely compelling, and engrossing animated soap opera all on its own. The heroes are likable, the action is tight and liquid, and the overall story arc is one that you can easily get on board with. It's really a show not to be missed.

If you’ve not checked it out yet, you might need to sit your butt down and give it a go. You won’t be disappointed, as when I sat down with it and began watching I very nearly watched it in 12 hours straight….at the very least I watched 10 hours in a row. Yes, it is THAT good.

Posted by GunMetalBlue at 5:58 AM

Email ThisBlogThis!Share to TwitterShare to FacebookShare to Pinterest
Labels: airbender, avatar, nickelodeon, the legend of korra