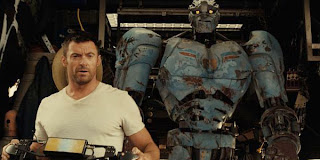 If you think you’ve seen REAL STEEL before you’re absolutely correct.
STEEL is the literal embodiment of every ‘child manages to overcome great adversity and succeed beyond his wildest dreams’ movie that you’ve ever seen, complete with the obligatory ‘emotionally distant parent realizes their deep and temporarily misplaced love for their son\daughter” subplot. It jam packs all the strong-enough-for-an-adult-but-made-for-a-kid stereotypes into a single film. A third of the way through the movie I was online looking to see if STEEL was produced by Disney*, because you couldn’t come up with a more Disney-esque film if you cloned Michael Eisner and made him create this movie using nothing else but the sweat pooled at the bottom of a Disney World Mickey Mouse costume and childlike whimsy.
And its really damn good. Note perfect in fact.
Just because all the plot points are incredibly predictable and the character arcs and story progression even more so doesn’t detract from the fact that STEEL consistently and irrefutably gets it. Slick and smartly crafted STEEL makes its mark through polished film making and charastimatic performances from its leads. although for the love of God can’t we find something better for Evangeline Lilly than ‘obligatory love interest’.
Yes, the film suffers at times from a sense of the overfamiliar, but let’s face it Hollywood is so full of retreads and remakes and reboots and reimaginings that most of what they put out these days can be teased apart by even the most casual moviegoer before the end of the first act.
Don’t dismiss STEEL just because you know what’s going to happen next. After all, people don’t stop watching their favourite movies or listening to their favorite songs just because they’ve seen\heard them before.