Book Review: THOSE ACROSS THE RIVER by Christopher Buehlman 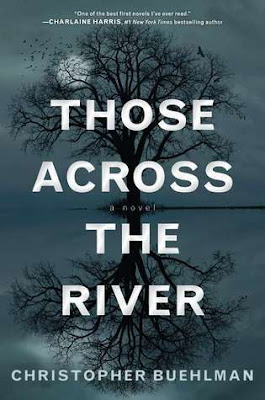 Frank Nichols is looking for a fresh start. Driven from the academic world in disgrace he has fled to the backwaters of Georgia, to the little town of Whitbrow, with his wife Eudora in the hopes of starting a new life.

Frank’s plan is to write a book about his grandfather, a former slave owner, who was killed shortly after the end of the Civil War when his slaves rose up and killed him.

In reality Frank accomplishes little beyond playing checkers with the locals and bemusedly taking in the town’s tradition of releasing live pigs into the forest each month. One day, in search of his grandfather’s plantation, Frank ventures deep into the woods surrounding the town. His discovery feral half-naked child leaves him to believe that there are more secrets in this town then he suspected.

As events begin to unfold Frank begins to realize that he has made a terrible mistake. There is a vicious presence in the woods, one that that will stop at nothing to get what it wants. The citizens of Whitbrow are helpless to protect themselves and soon the threat of bloodshed threatens to consume them all.

After a couple weeks of reading nothing but epic shooty-shooty space opera I was looking to cleanse my palette somewhat. “Enough genre books,” I mumbled irritably to myself. “It’s time to switch gears and read something that doesn’t involve alien lazer-bots or wizarding sword jockeys."

I thought RIVER would be just the kind of book to help me do that. But when you’ve got a pull quote from one of horror’s biggest names on the front of the book that goal is easier dreamt of than achieved.

Thankfully RIVER is so well written, its story matter so deftly handled, that I completely forgot I was reading a genre a book at all. I mean, this book is trading in subject matter that in the last five years has been turned into the exclusive stomping grounds of moody love struck teenagers.

If anything author Christopher Buehlman harkens back to an older set of horror style rules, where rampant fornication and a propensity for illegal drugs was more likely to bring a quick end to your brief life. Only Buehlman manages to transcend even these well-worn platitudes and deliver a story that tips its hat to the past but refuses to be bound by it.

That’s what makes RIVER so refreshing actually, the complete and utter rejection of the cloying motifs and clichés that have stuck to our contemporary literary creature features. Buehlman eschews emo adolescents stuck in clumsily formed love triangles and instead gives us complex and nuanced characters with more on their minds than simply making it through another day of high school. I hadn’t realized how pervasive these superficial themes had become, and how much I shunned books that showcased them, until I started revelling in their total absence in RIVER.

When I started reading the book I didn’t realize the baddies were going to turn out to be werewolves. With Buehlamn choosing to set RIVER against the Depression era poverty of the Deep South I thought the book’s antagonists were more likely to be affiliated with WICKER MAN-style fertility cultists than anything else. Now either that says something about my ability to pick up on the clues left by Buehlman or I was simply so engrossed in the story that I didn’t have the time or the inclination to pick it apart and figure out its inner workings. I choose to believe it was the latter.

But let’s take a closer look at what Buehlman does right. Character. That’s a big one right there. The strong character-work is what carries this story on its back. Whether it’s the tortured but determined narrator, his strong willed wife, or the parade of bit characters who wander off after a chapter or two, but leave an indelible mark on the reader nonetheless, each character feels like a whole, completely realized individual.

Buehlman creates wonderfully damaged souls who aren’t defined by their emotional turmoil. Instead these people gamely struggle through life the best they can without resorting to moping glumly in their rooms. This emotional impairment deliciously flavours their personalities and influences their decisions but it never takes over the pulse of the story.

A lot of the credit for Buehlman’s strong character work has to do with his decision to set the story during the Depression. The American South in the 30’s, with its distinct character and attitudes, creates a rich backdrop for Buehlman to extract the visceral helpless and desperation of the times and feed that emotional frailty back into the dark subtext of the story. The invisible legacy of history is always present, from the Civil War to WWI, as the violence and cruelty of humanity steers the tale along to its tragic and seemingly predestined conclusion.

Read RIVER long enough and you’ll soon pick up a distinct undertone of Stephen King. Buehlman has King’s same eager engagement, equally at home plumbing the darker depths of the human psyche or outlining the timorous strands of a young couple in trying circumstances. He channels King’s best qualities, while retaining a fresh and distinct voice of his own.

THOSE ACROSS THE RIVER unflinchingly stares and witnesses the compromises and concessions we all make when we struggle to live; where other books would withdraw to happier pastures, shielding their readers. It’s a fast paced, pull no punches, modern horror story that refuses to gloss over the rawness of its subject matter. For anyone burnt out on the TWILIGHT-ification of modern horror, this is the book for you.